This morning, Jack "Ghost Rider" Sweeney joined me for the 3-Bridge Ride -- the Clearwater causeway, Bayside Bridge and the Gandy Bridge. It's a 50-miler from our Seminole Heights neighborhood and gave us some great views of the water all around us.

After crossing the Courtney Campbell, we made a left onto the Bayside Bridge and headed south into fierce headwinds. 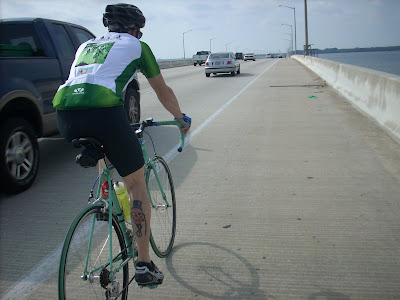 Jack stopped to pay his respects to the bicycle memorializing the life of Frankie, a St. Petersburg pizza shop bike commuter who died last year on the road. The Ghost Rider and the Ghost Bicycle. It's in front of Derby Lane dogtrack on Gandy. 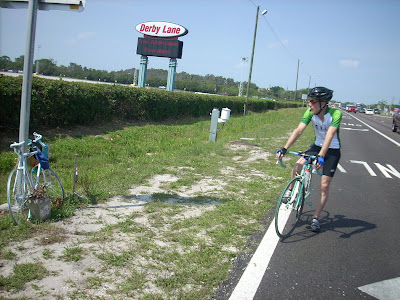 The shoulder offers ample space to change a tube -- as the Ghost Rider was forced to do when a shard of glass did a pffffff job on his rear wheel. 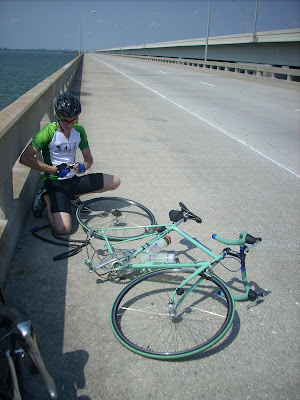 Well, I sure could have used my team car or the Mavic neutral support van for help, but the tube change went pretty smoothly...you should have timed me!

A great ride -- so nice to travel over that much water.

You guys were prepared! Do you often carry extra parts with you for stuff like this?