The River Mountains Trail Outside Las Vegas -- Another Cycling Gem Another side of the Las Vegas bicycling scene is the River Mountains Loop Trail, an undulating 35-mile continuous loop that connects the cities of Henderson and Boulder City, along with the spectacular foothills stretches near Lake Mead and Lake Las Vegas.

My Sunday morning tour guide was Ron Floth, who tries to get people bicycling and using non-car transportation for the Regional Transportation Commission for Southern Nevada. http://www.rtcsouthernnevada.com/

Ron is an ardent bicyclist who rides a Scott road bike, equipped with rear carrying rack. He was instrumental in including the bicycle section in a downtown transit center in Las Vegas.

We met around 8:15 am today at a trailhead in Henderson, a suburban-style city outside Las Vegas and now the second biggest city in Nevada. 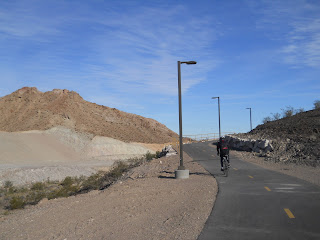 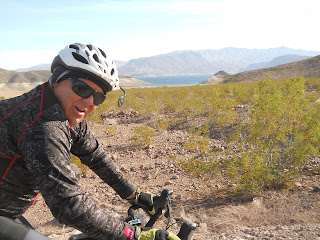 Ron is pure Mr. Enthusiasm, combining his love for bicycling and his salesmanship skills with the mission of building a transportation system with more bike lanes and multi-use trails in the southern Nevada area.

It's a challenging loop, with lots of rollers and a few steep grades, plus some fun stretches that include an old railroad right-of-way, a former lake shore road and even a drainage right-of-way that doubles as part of the recreational trail outside Boulder City (known as the city that built the Hoover Dam).

What impressed me was the regional cooperation between Henderson, Boulder City and the Lake Mead National Recreation Area to realize this regional trail. Ron said his RTC agency has a bulldog of a grant writer who helped acquire federal traffic congestion and air quality money to build the trail.

It's a stunning resource and another side of the Las Vegas scene you don't see in the movies, brochures or tourism billboards.

It's also another reason why Las Vegas is the unheralded bicycle gem of the West. It doesn't get any of the bicycle props of Portland, Seattle, Tucson, San Francisco or Denver. Yet, Las Vegas offers 280 miles of bike lanes and more miles are coming the upcoming year, Ron told me.

Here is a map of the River Mountains Trail: http://www.rivermountainstrail.com/trail%20map/rmtpmaps.htm

wonderful information,This is just the kind of information that i had been looking for, Thanks.packers and movers bangalore