The Blinking Man bike ride in downtown Las Vegas is hardly new. But it was for me last night.

The rolling, rollicking "Burning Man" of bicycle rides is part pub crawl, part costume dress-up bike-social that attracts a fun variety of bike-loving folks on cruisers, low-riders and single-speeds. Many of them would not be pedaling on downtown streets if not for the safety in numbers.

There were probably several hundred of us who launched from the Huntridge Tavern off Charleston Blvd. I loved the color and vibe of the whole evening. This gal hauled hula hoops between the pit stops, then put them into action at each stop. 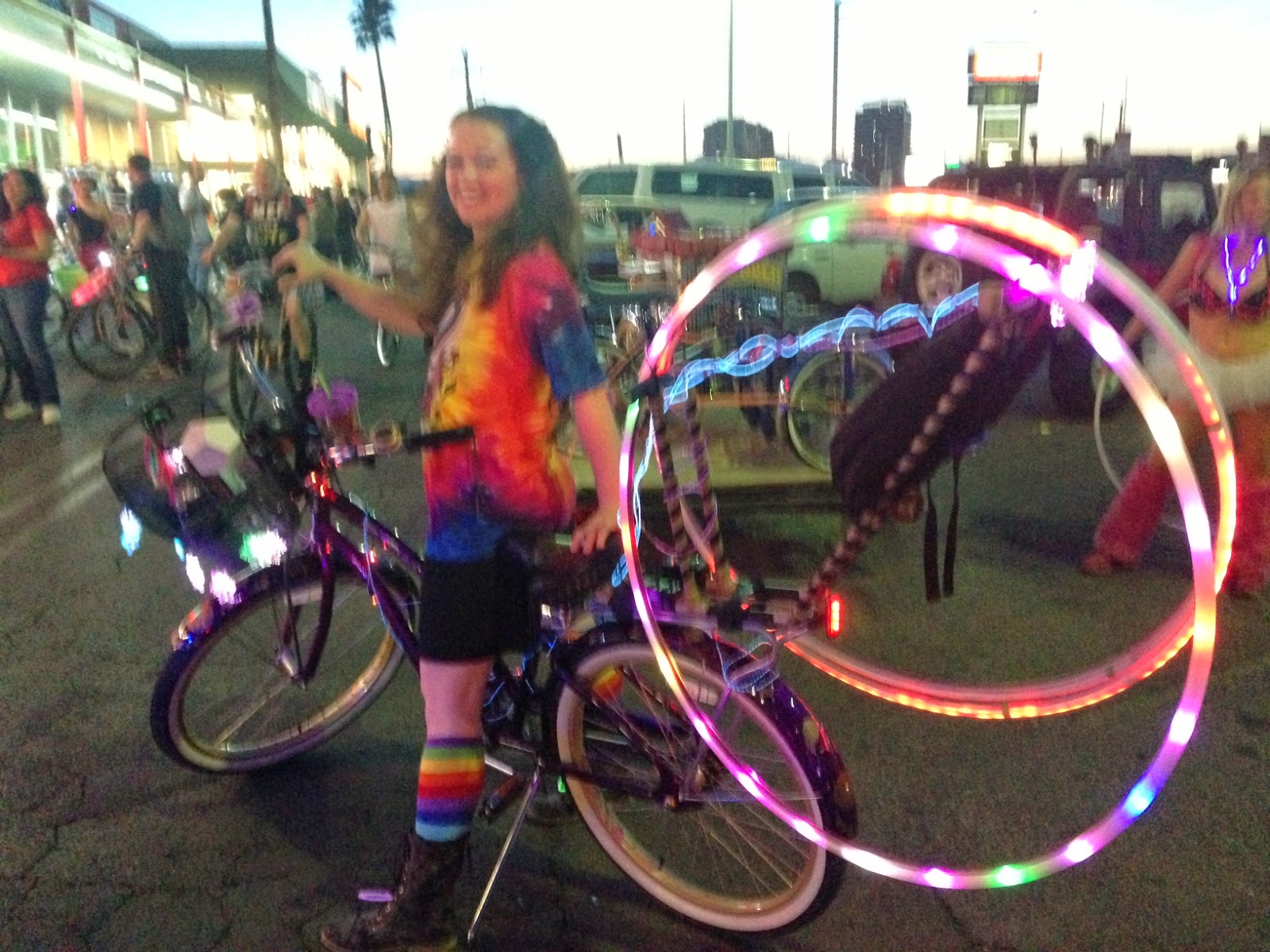 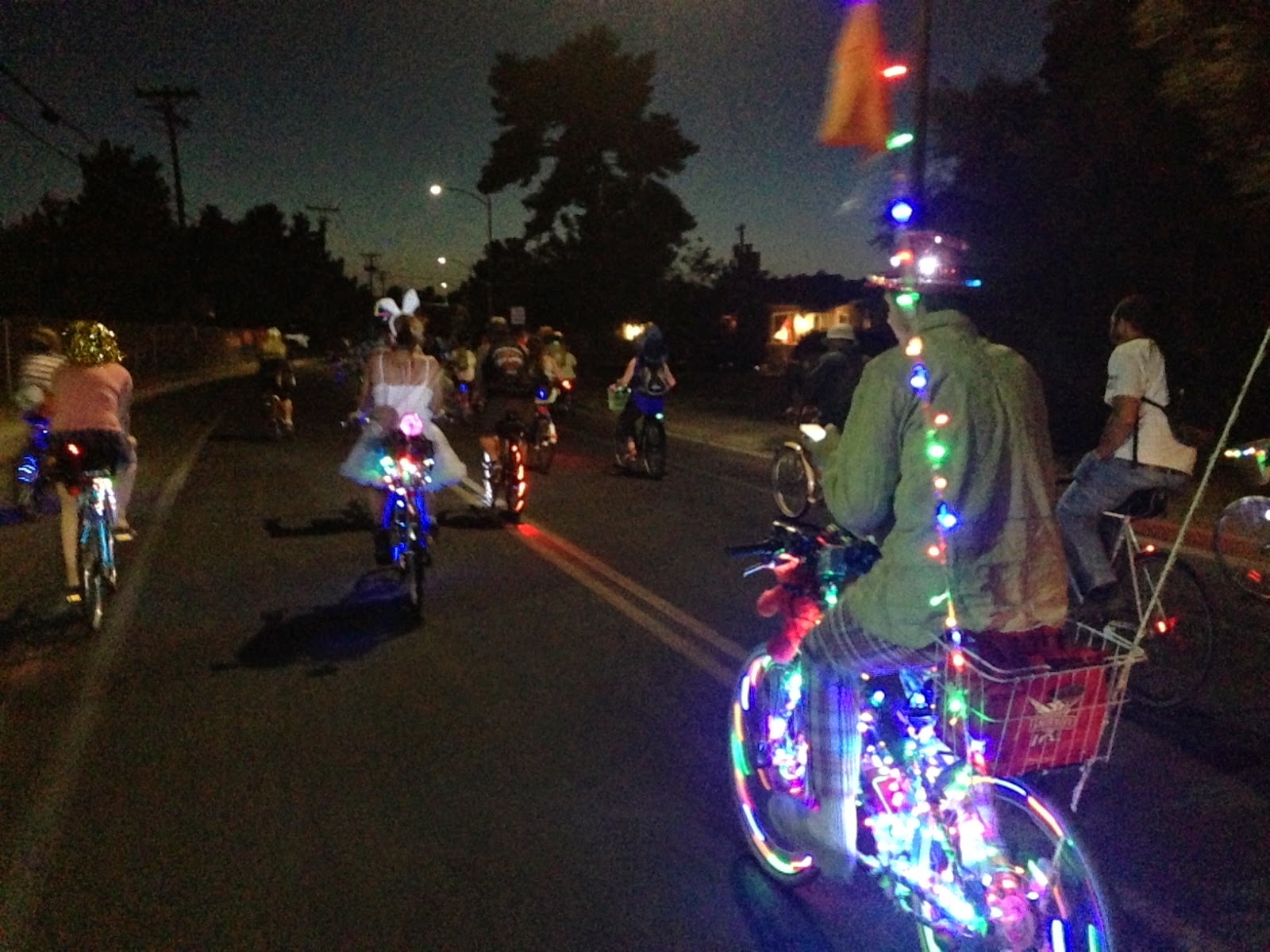 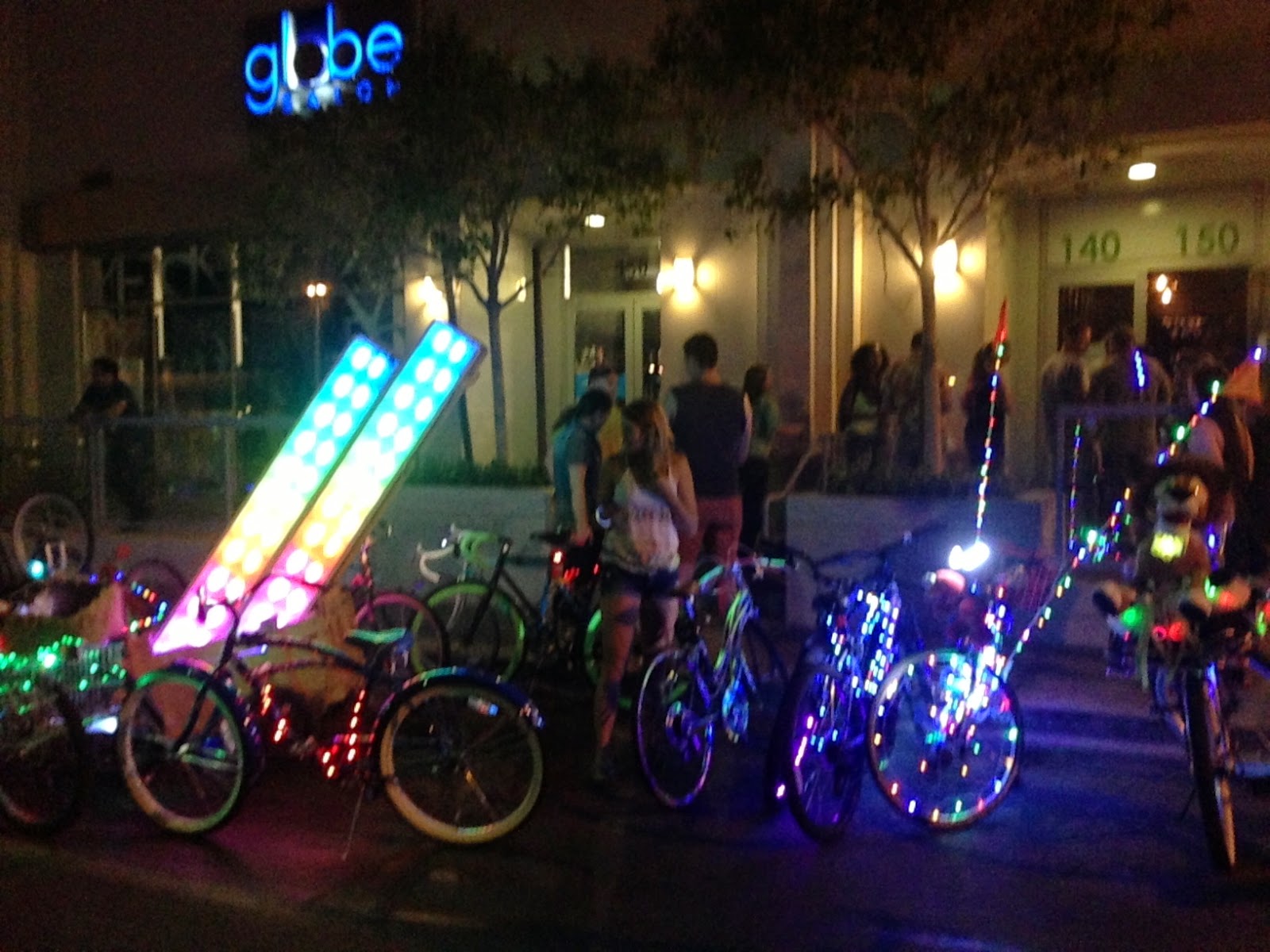 Nothing like the ol' pit stop to take the group photo. Hope the photogs had a wide angle. 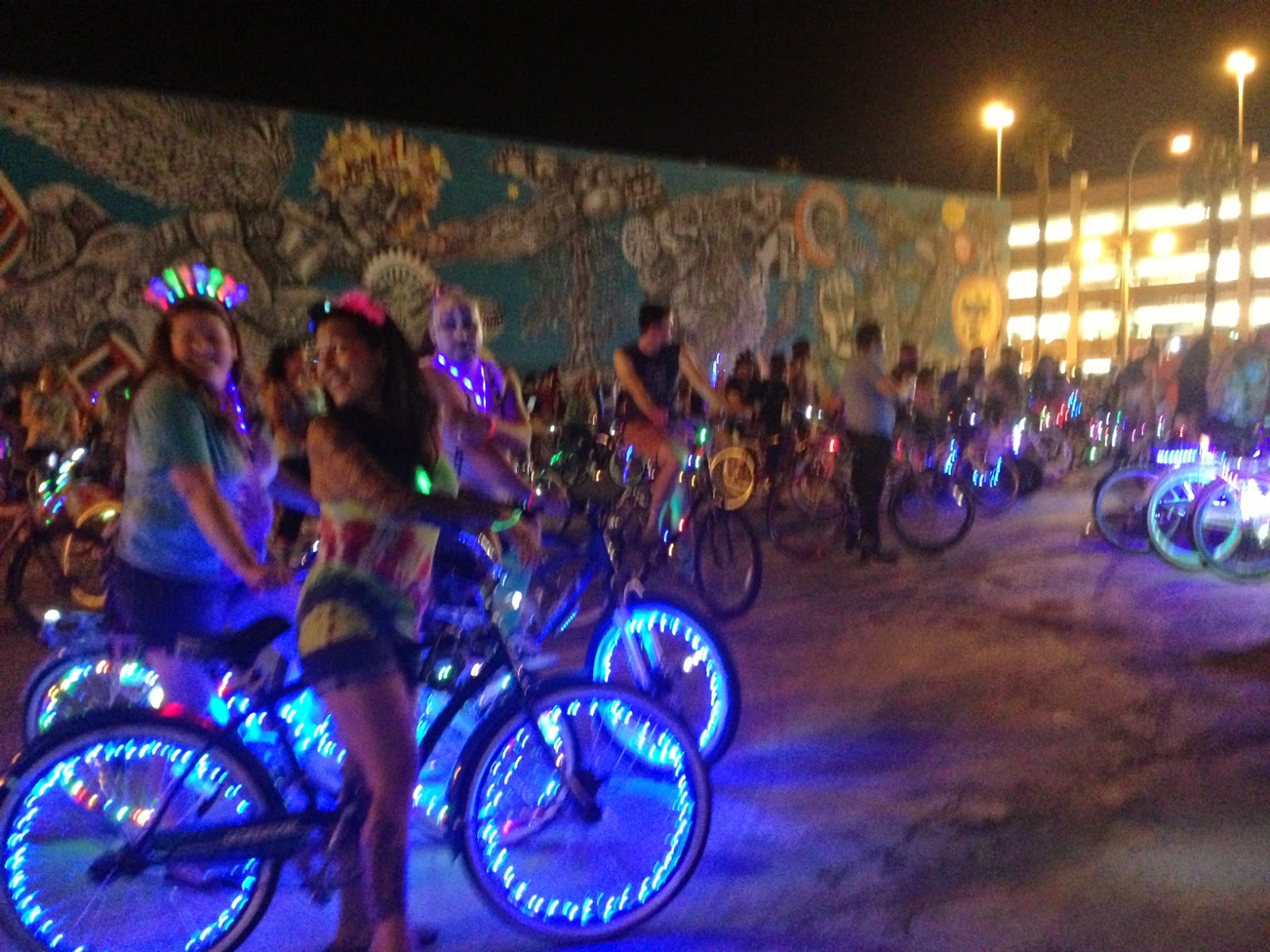 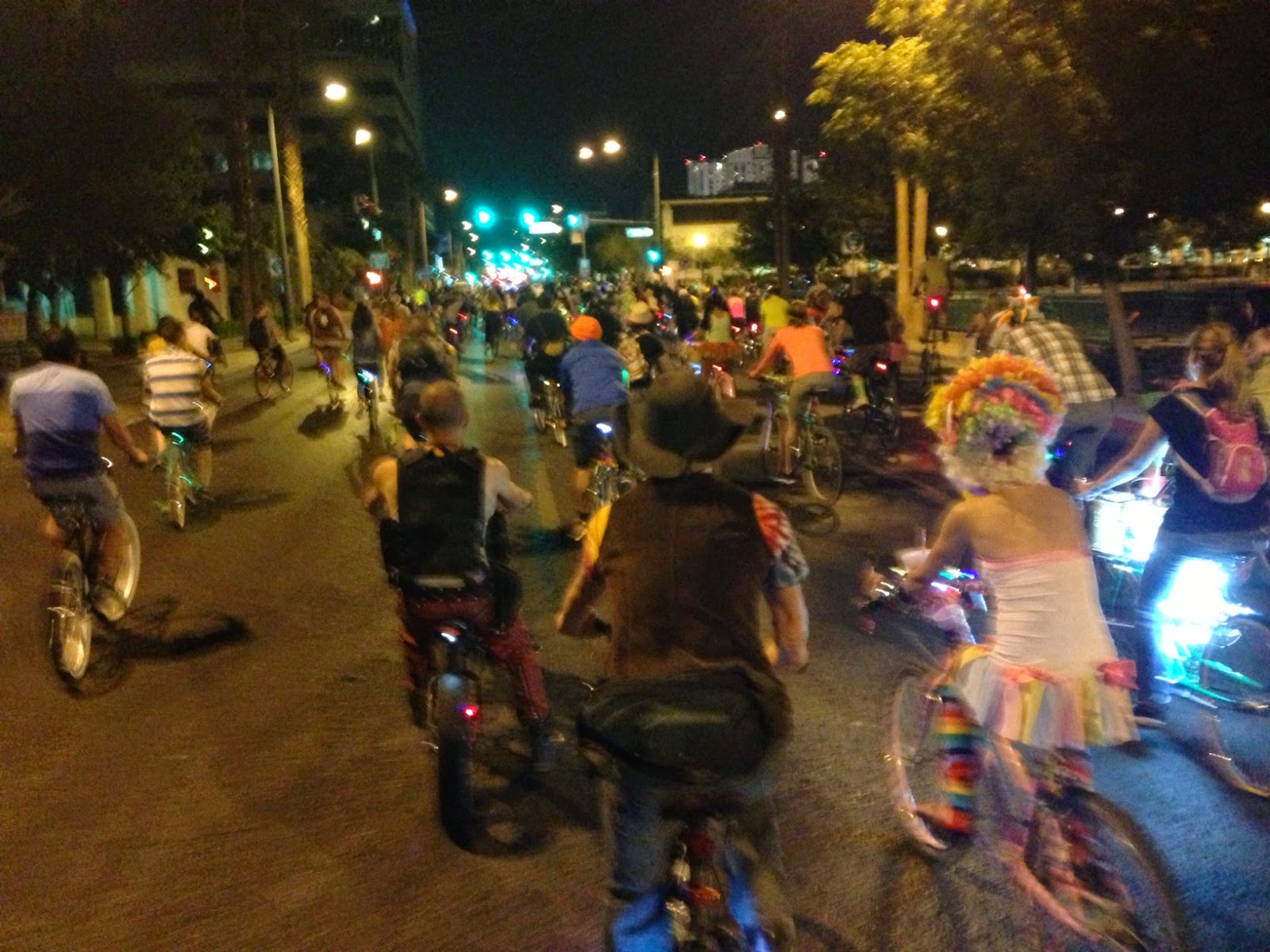 There was an amazing array of interesting characters. Like this guy who was biking with his recumbent-riding wife. They were spreading the word about the disturbing number of veterans who commit suicide. 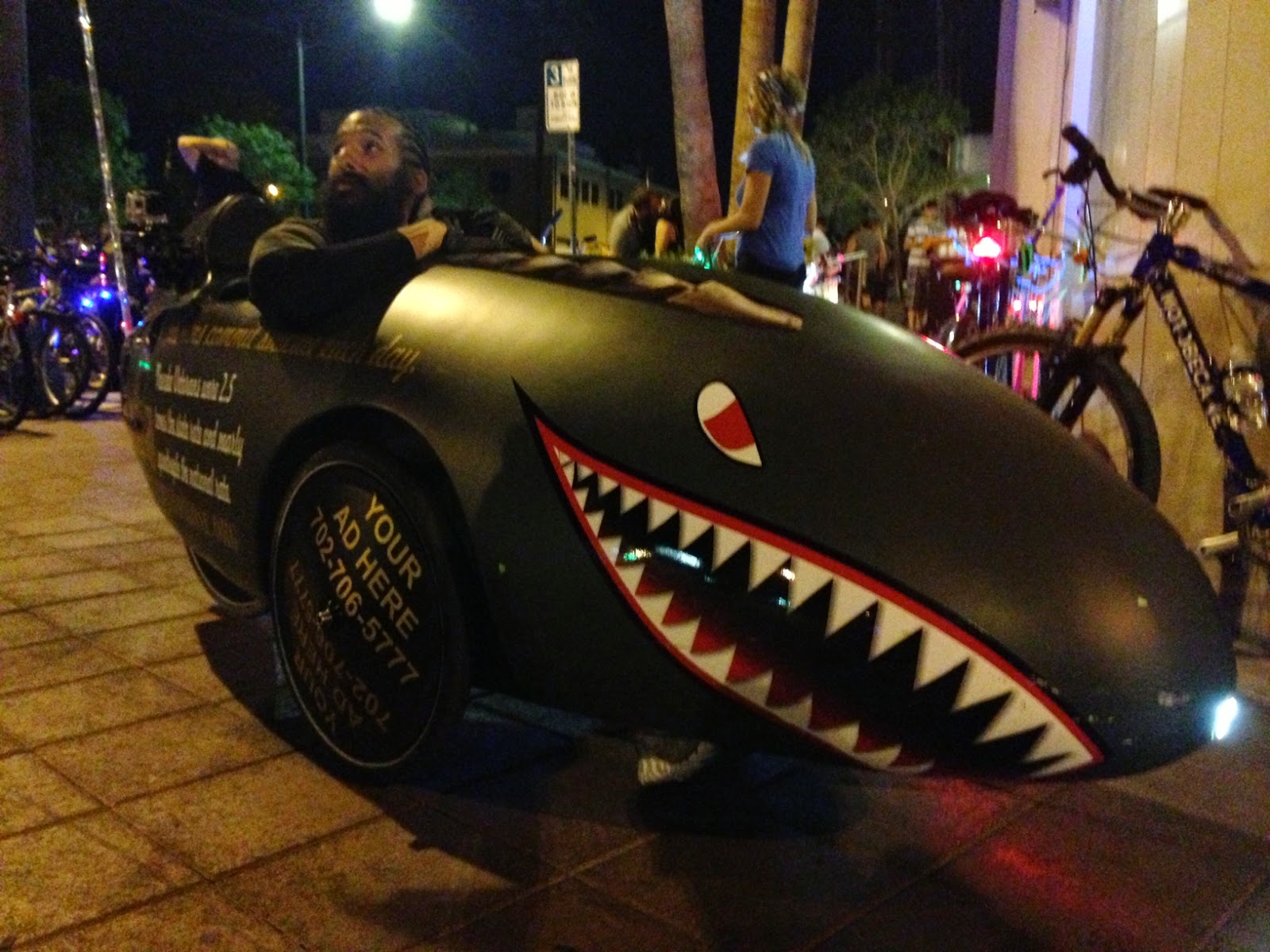 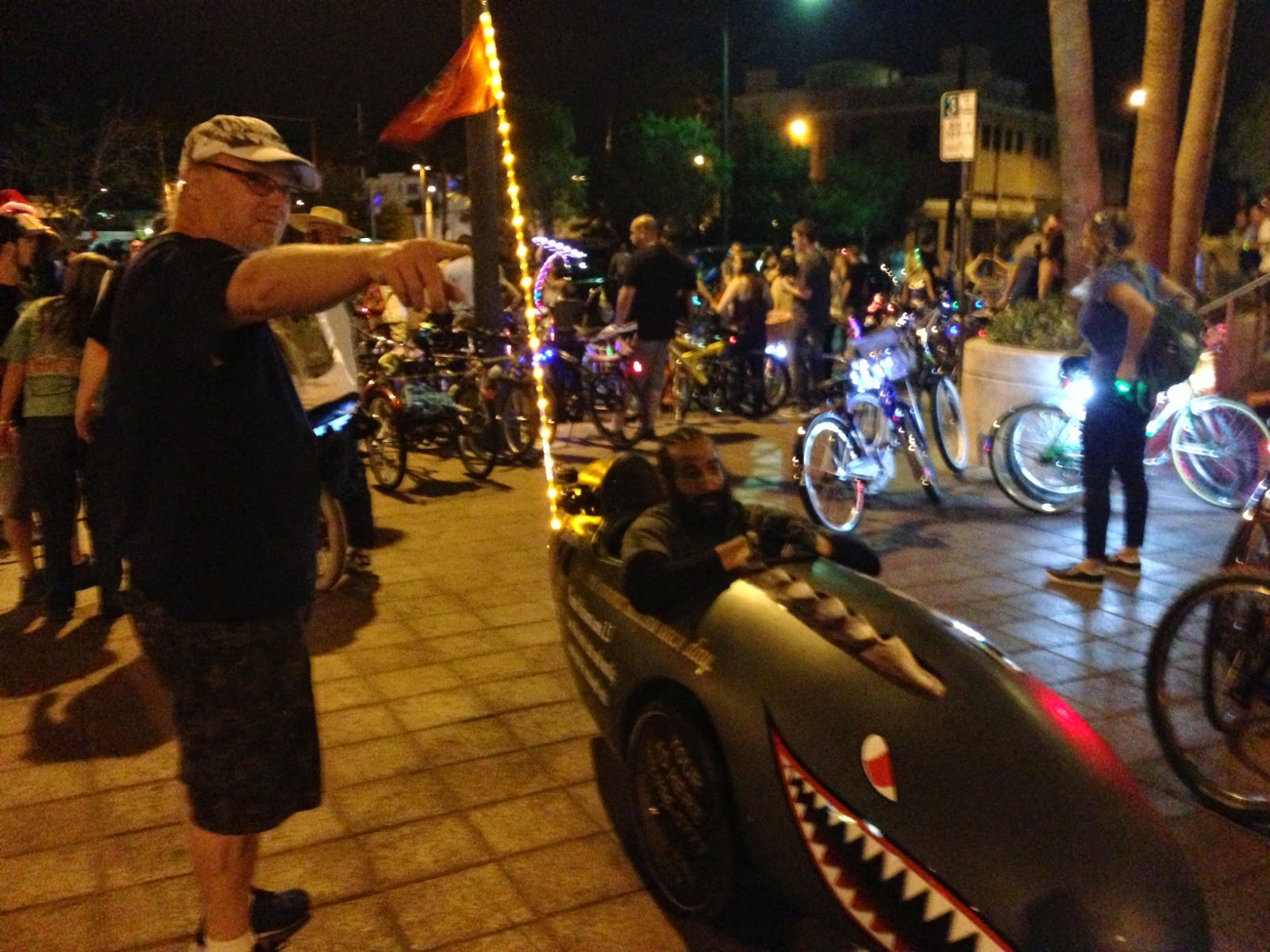 For people who hungered for a munchy, there was this fella with the snack bar on wheels. 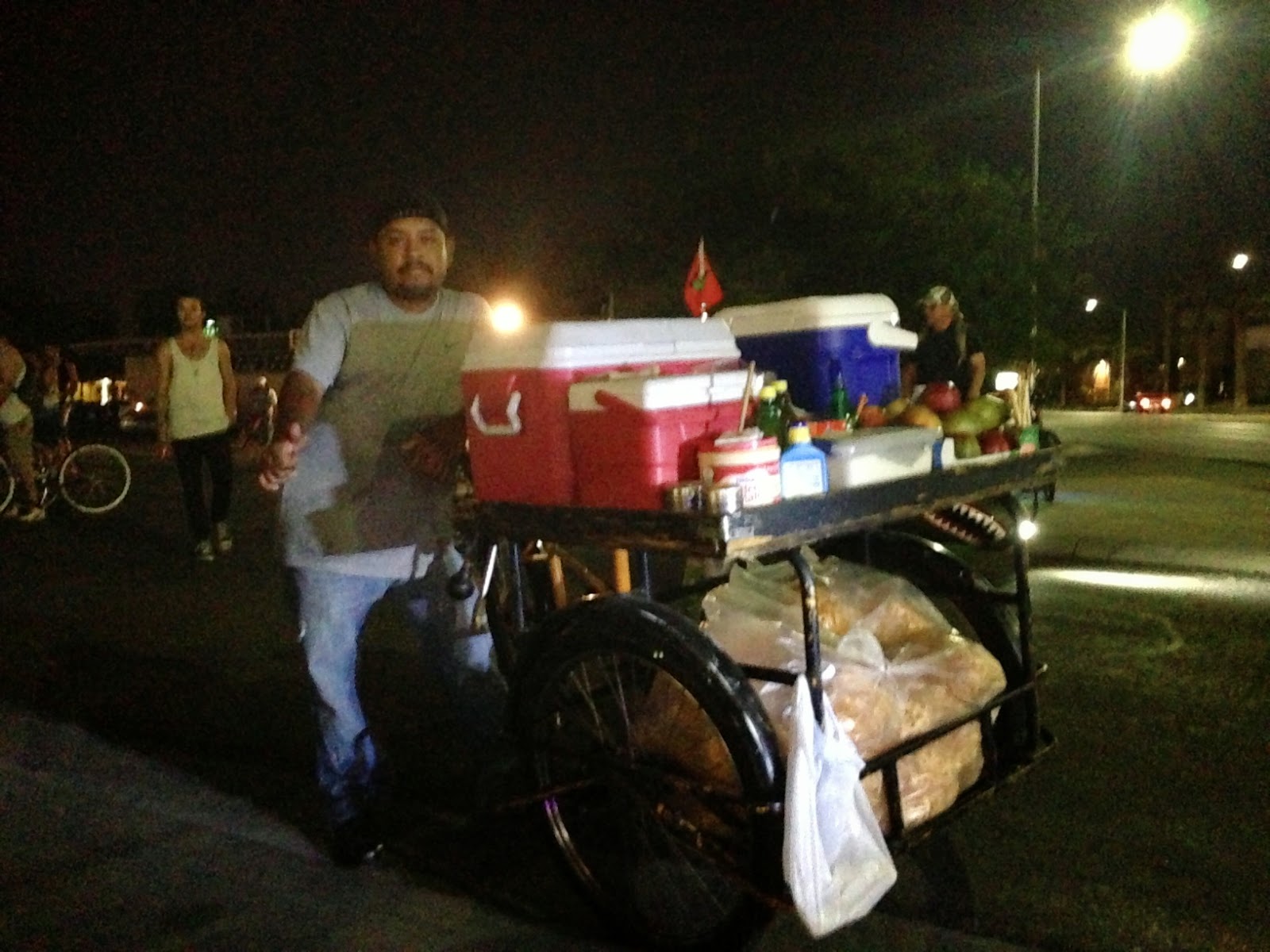 One of my favorite characters was Justin, on the right, who took two Schwinn lowrider bikes and put them together by somehow connecting the fronts of both -- without welding them. 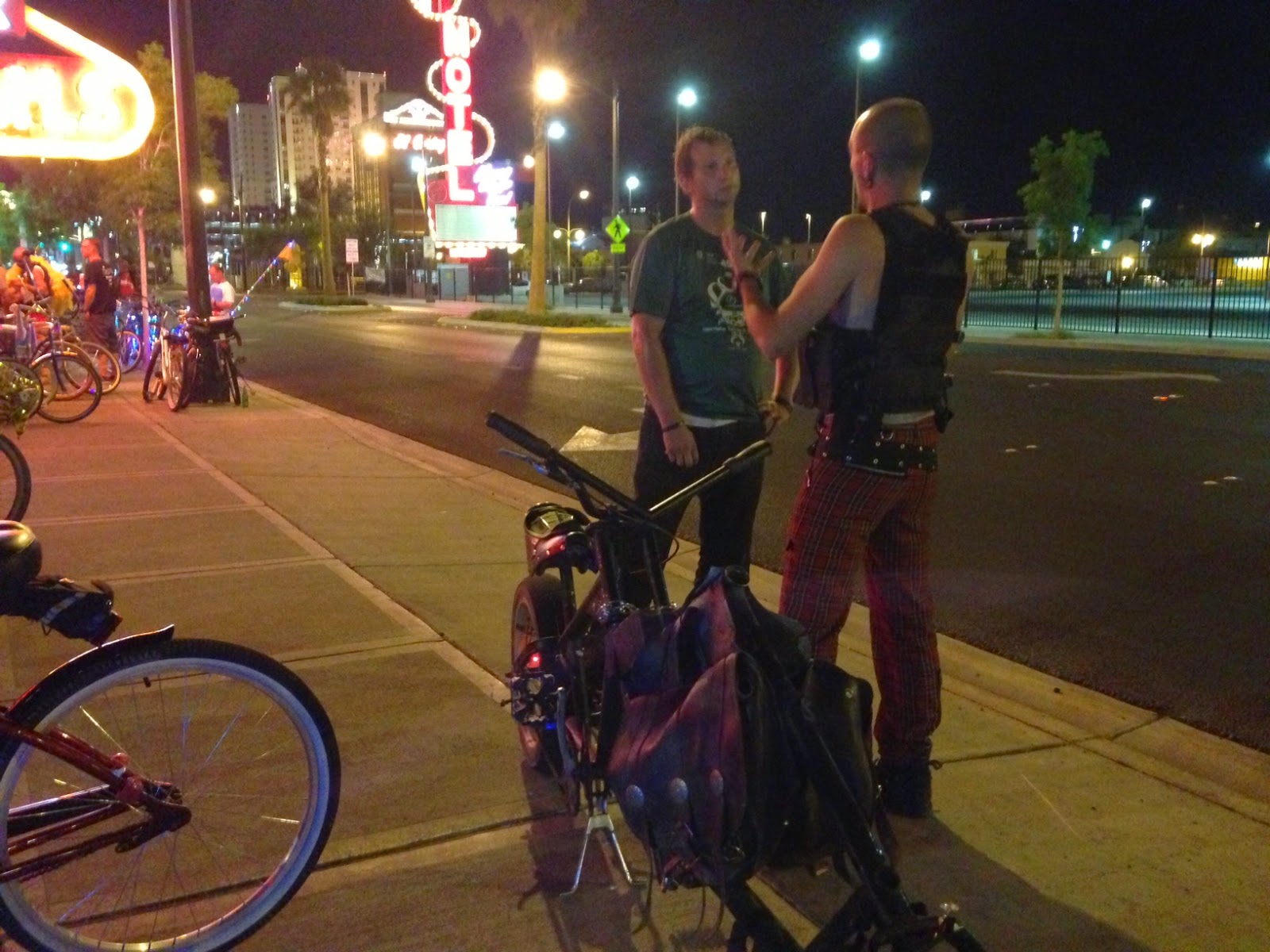 This gal's issue was anti-bombs, I believe. 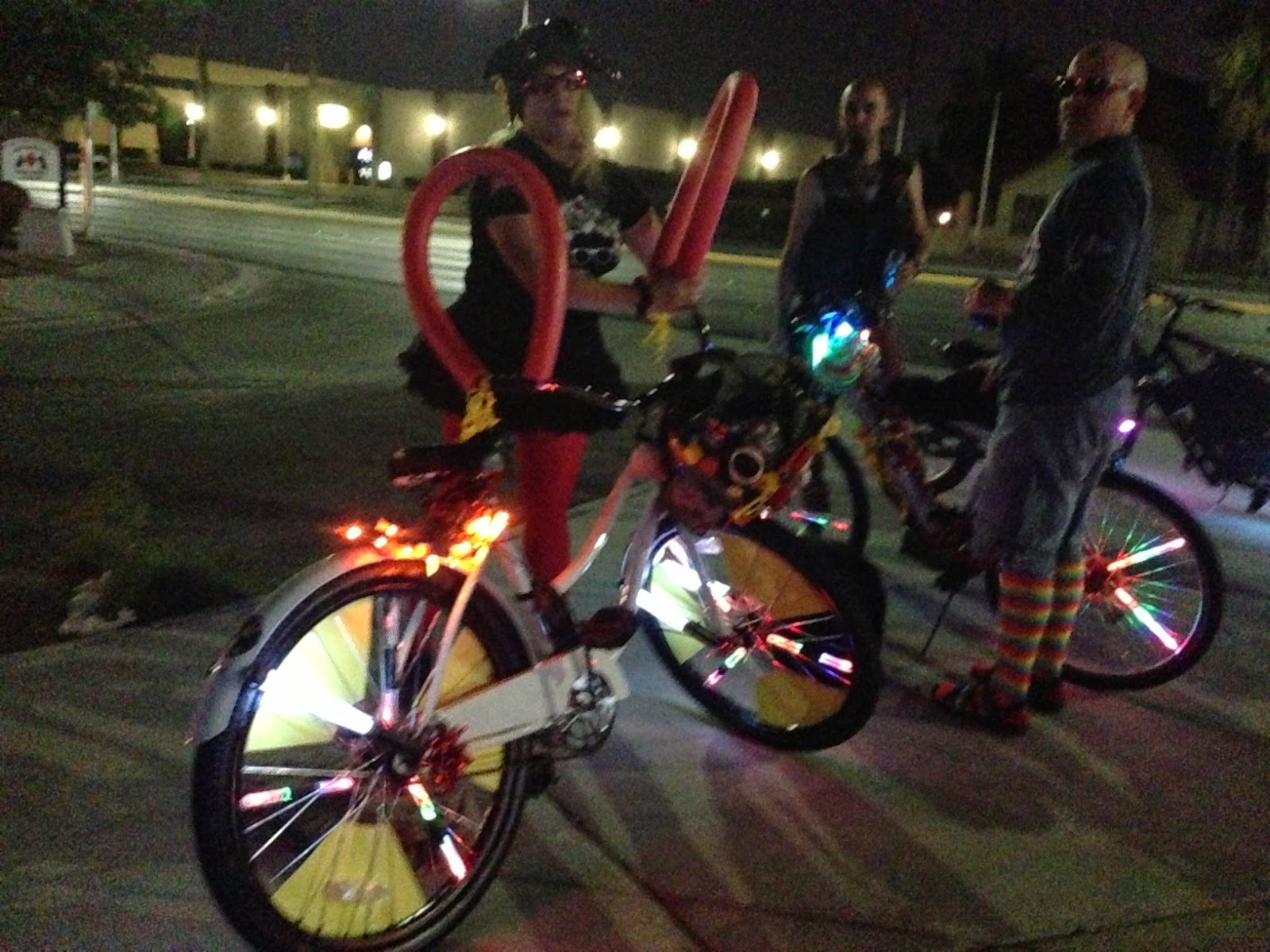 For some reason, there has been a proliferation of guys dressed in Indian garb at the Fremont Street experience who feel compelled to show their ass -- like this guy who was rollerblading and not biking but was naturally just another part of the Blinking Man scene. 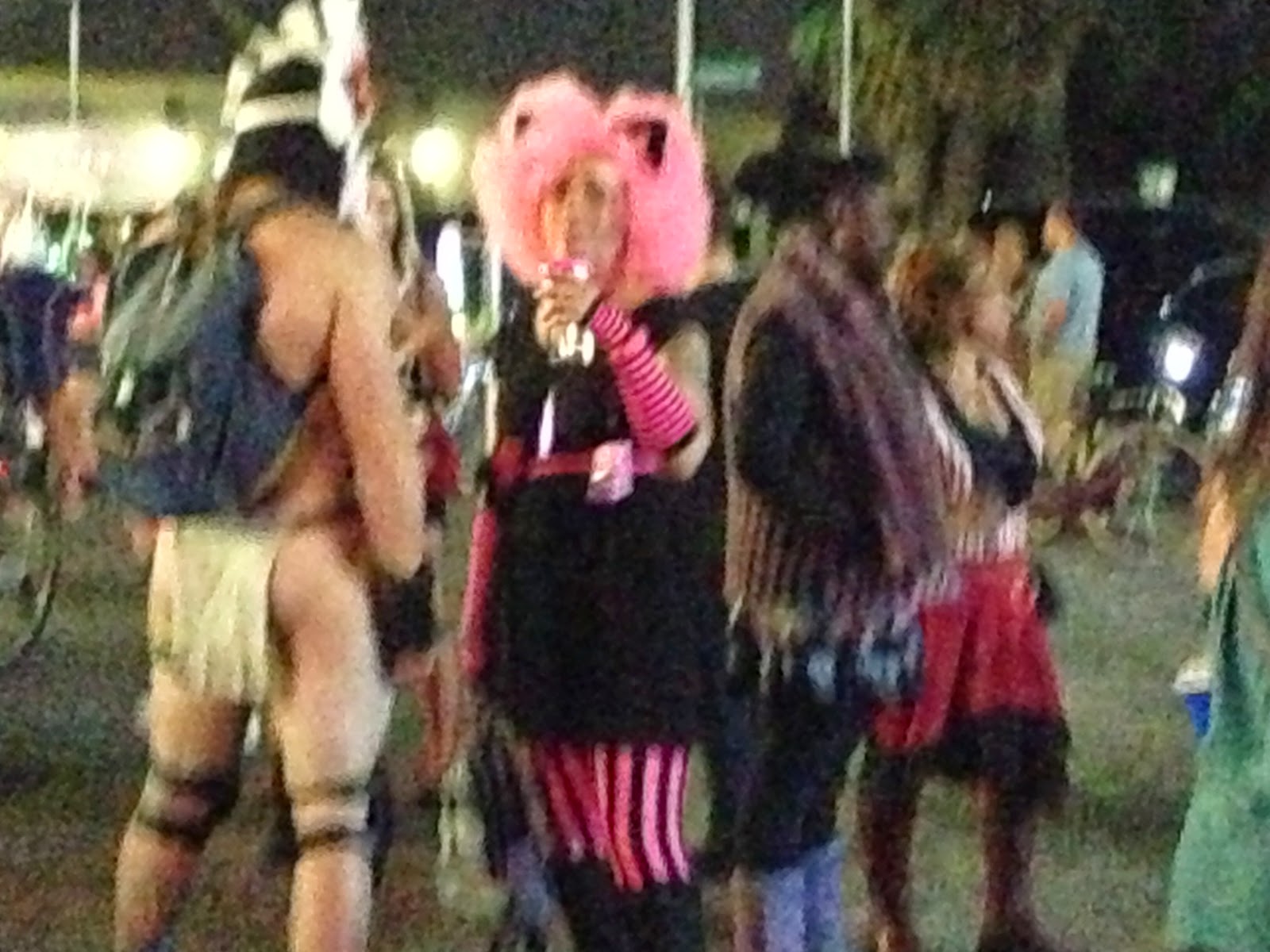 Against my better judgement, I even included a shot of myself. Sorry for the non-creative outfit of going as a nerdy newspaper reporter. Hope the blinky light as tie clip and the matching orange bandana/doo-rag as suit breast pocket handerchief gave me an iota of street cred. 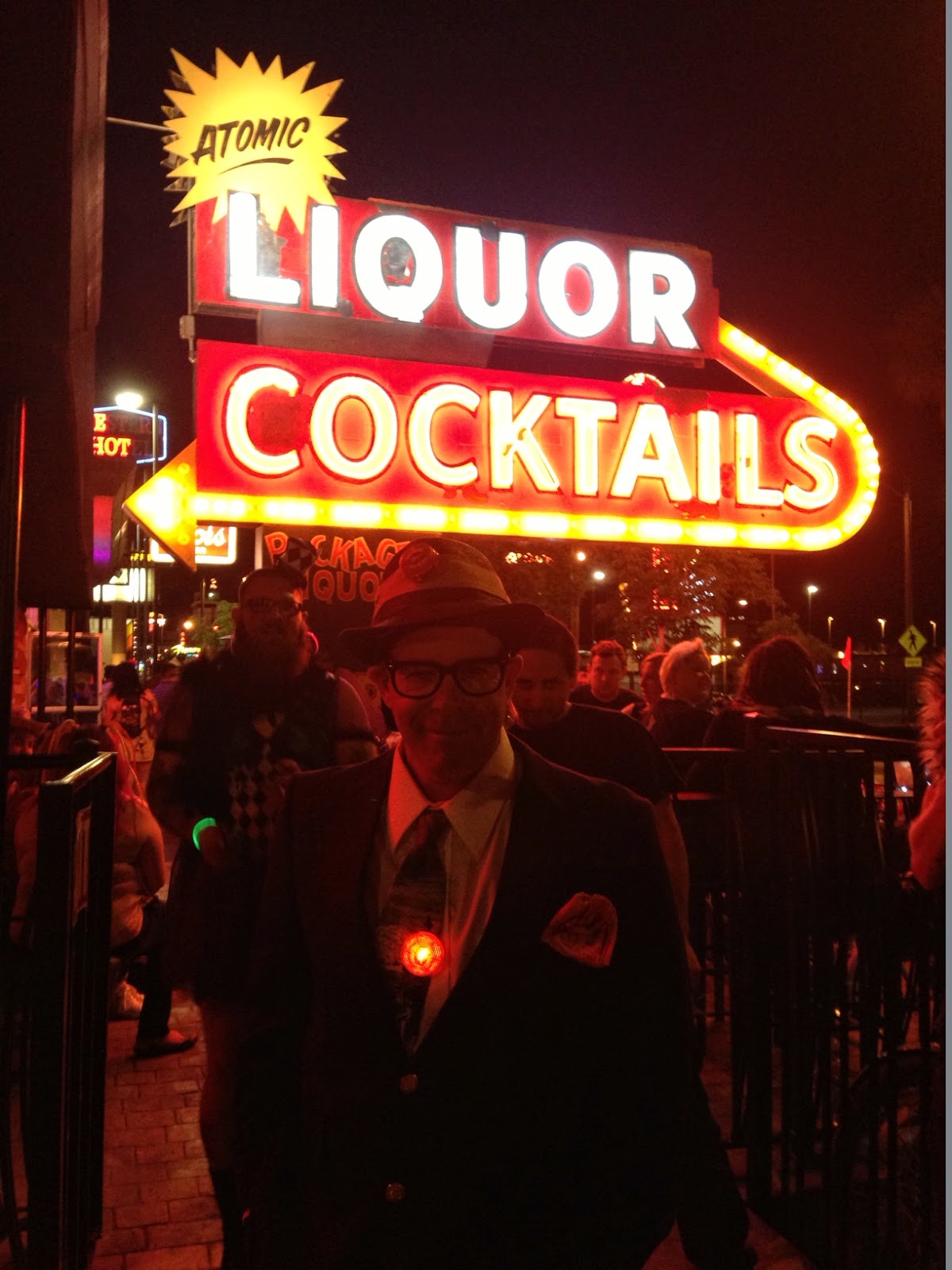 .
Kudos to organziers Kathleen and great job David Levy on the announcements and schedule.
Posted by Alan at 6:35 AM