Catching Up With An Old Friend By Bicycle

It didn't matter that it was 41 degrees and breezy out of the West on the farm roads outside Frederick, MD.

I hardly felt the cold. That's what happens when you bike with a great high school friend for only the second time in 33 years.

Paul Feinberg always had a quick smile and a reliable 15-foot jump shot and today he offered warm conversation while we cycled on a late November day. 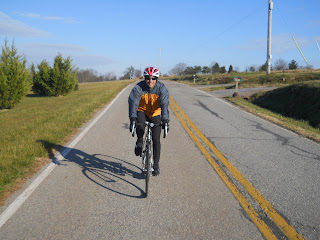 Paul went to Tulane and I went to Hobart College in the fall of 1979.

We didn't see each other again until June 2009 when I drove with my bicycle to Paul's home in Frederick and we biked 40 miles on the rural Frederick-area roads.

Then today we biked the same route and renewed a friendship that was made possible with a great bike ride.

It was great catching up with a fellow Fightin' Maccabee.
Posted by Alan at 5:23 PM