A Bicycle Built To Travel 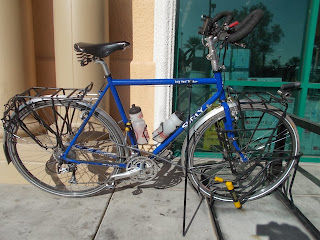 Now this is a travelling bike -- saw it locked up at a Whole Foods near Lake Mead Rd.

A Ciclovia Comes To The City Of Henderson

Whenever a city hosts its own ciclovia and closes a stretch of popular boulevard to motorized traffic so that human-powered transport like bicyclists, skateboarders, walkers and roller-bladers can take over the pavement, that is a wonderful thing.

Such was the case today in the suburban city of Henderson outside Las Vegas. The folks at the city of Henderson, who are hungering for a silver medal in the bicycle friendly community category from the League of American Bicyclists, held a "Stroll n Roll" event. Not sure why they didn't call it what it is -- a ciclovia, which is popular in cities around the world.

They shut down a mile-long segment of one side of the four-lane Paseo Verde Parkway between the Henderson Multigenerational Center and Valle Verde Drive.

The city held a series of terrific mini-festivals and activities in parks along the one mile for kids and families to paint faces, chat with clusters of vendors under tents and get chakas like free pedometers.

But this was the most bizarre thing of all: Nearly half of the people who attended didn't even bother to walk or stroll along the open street -- they walked on a paved trail next to the road. I guess people are so programmed to think that streets are only for cars that they didn't event bother to savor the four hours when a mile-long stretch of scenic parkway was open just for them.

Here are your photos. The first two show just as many people on the sidewalk trail as on the street. 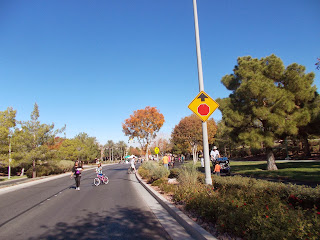 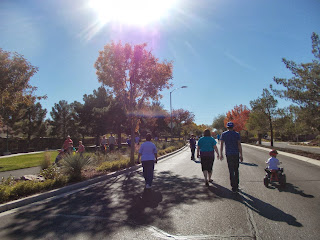 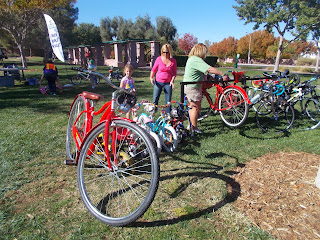 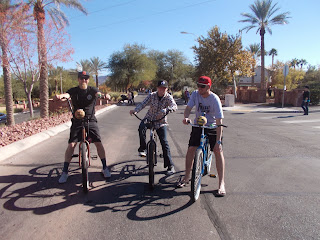 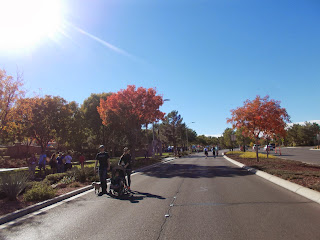 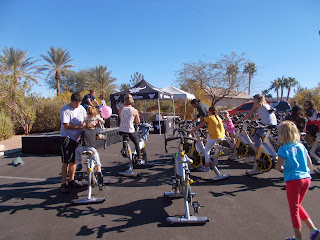 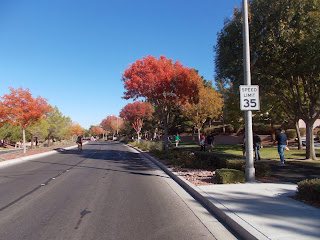 A Ciclovia Comes To Nevada

Henderson is definitely hunting for that League of American Bicyclists bicycle-friendly designation with events like this -- putting on its own ciclovia on Saturday.The city of Henderson is staging an event what is called, "Henderson Stroll 'n Roll," from 10 am to 2 pm on Paseo Verde Parkway. The city is also having a street festival and free bicycle valet.

It's being billed as a "car-free way to bike, walk, skate and play."

It's just the latest pro-bicycle event put on by Henderson, which held its own bicycle swap meet and festival earlier this year. The city has gone out of its way to make Henderson bicycle-friendly.

I believe this is the first ciclovia in Nevada. Ciclovias have sprung up all over the world. There was one just a few months ago in Los Angeles, which was immensely successful. 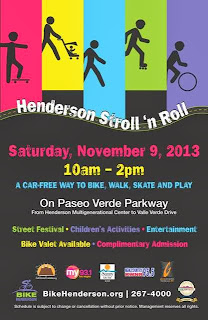 When I lived in Tampa, I asked Mayor Bob Buckhorn and several city officials who run transportation and public works to simply do what the city of Henderson is doing: Close down a stretch of popular roadway to motorized vehicles (like Bayshore Blvd. in Tampa for a mile for several hours on a weekend day) and allow only human-powered transportation.

Never happened. In Tampa, the city wants people to do and pay for what many city governments provide. In contrast, the city Henderson put on a bicycle swap meet and festival earlier this year and it's putting on Saturday's ciclovia.
Posted by Alan at 5:17 AM No comments:

On Saturday mornings, I have biked with a new bike pal -- Dr. Scott, a veterinarian and vet school teacher who loves to bike slow enough to soak up all the views of Red Rock Canyon. Our paces are similar and we chat easily about everything from great bike routes to religion to people.

We were climbing the Red Rock Canyon scenic loop this morning, talking about how everything is about marketing and middlemen and Scott cracked," One thing man is good at is deceiving each other." But he followed it up by outlining the amazing surrounding red rock and white sandstone and green mountain scenery with his hand and observed, "But this is The Truth." Here, Scott and I hang out with a few bicyclists at the scenic overlook at the top of the loop. 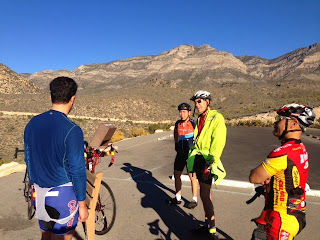 I have developed a pre-work Wednesday morning tradition -- meeting up with the Las Vegas Cyclery some place on Rt 159 or in Calico Basin. Then, we head to the scenic overlook on 159 in Red Rock Canyon. Here's the hearty bunch this week. 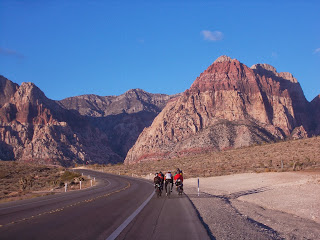