Last week you might remember Harvey, the Santa Cruz bicyclist who traveled to Red Rock Canyon Conservation Area's loop four times a year. He biked a massive mountain bike and was climbing about 3 mph up a steep hill when I saw him last Sunday. 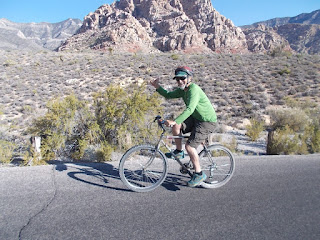 I thought Harvey topped the colorful character category at the Red Rock loop. 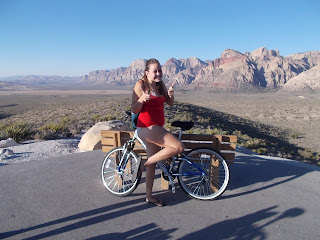 Around 6:50 a.m., I met a woman who puts new meaning behind colorful character. She rode a heavy clunker of a bike (a Next) and several other distinguishing characteristics:

-- Hey boyfriend refused to allow her to bike in the small granny gear to grind up the steep hills.

-- She wore a bikini bottom and flip flops.

-- She says she doesn't mind being in the newspaper because she's already "on the internet."