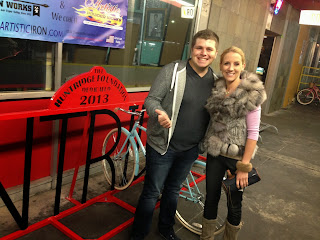 On a gorgeous unsually cool night in Las Vegas, I biked a mountain bike converted into an urban chariot -- a GT Zaskar -- to ride to the Faciliteq building, which is on Main Street in Las Vegas in a tough neighborhood and no man's land between the redeveloping downtown and the evolving hip arts district. On First Friday, Faciliteq's owner, Quentin Abramo, has a happy hour for his dozen green, environmentally-minded business tenants. I did a story on Quentin marking eight years in the building this month.

After chatting with some of the commercial tenants, I biked about a half-mile to Amie Pellegrini's unqiue boutique bike shop called Town Bike. Amie mentioned there was a celebration to mark the debut of an amazing, giant bicycle rack near the Huntridge Theater, a historic theater getting a rehab on busy Charleston Blvd. A company known for its great iron work jobs -- Artistic Iron Works -- crafted the new bicycle rack.

Here's Amie in her bike shop getting ready to bike to the bike rack event. 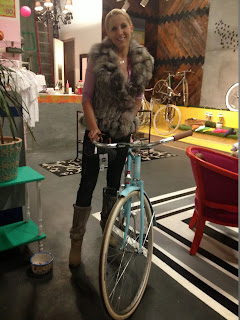 Then it off to see this amazing bicycle rack. Channel 8 was there and the local neighborhood was celebrating with cool Mexican eats. 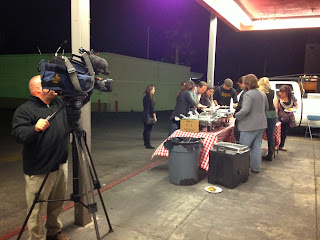 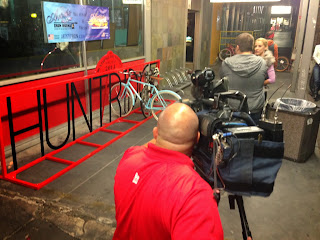 The giant bicycle rack was amazing. 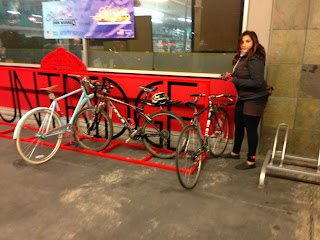 A guy named Lance saw my GT Zaskar and said he did the same thing that I did -- convert the 1990s-era mountain bike into an urban bike complete with tire slicks and rear carrying rack. 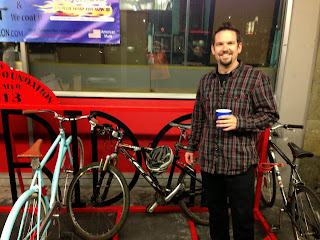 The bar near the Huntridge Theater is a hangout for bicyclists on low riders and coasters. Like this guy. 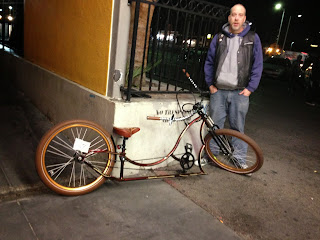