That Thorny, Never-ending Florida Bicycle Topic -- How to Stay Alive in the Sunshine State 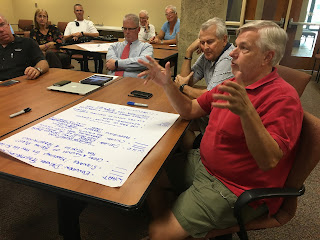 It’s the issue that just won’t go away -- here in Indian River County and across Florida.
Pedestrians and bicyclists trying to stay alive on modern roads designed
mostly for those two-ton motorized vehicles called cars.
The Sunshine State has a dubious track record of engineers designing
car-centric roads and a high number of cyclists and walkers who have
lost their lives trying to negotiate roadways in Florida. Throw in distracted,
multi-tasking motorists who think bicyclists should ride along the edge of
the road and not exercise their road rights and you have a recipe for crashes
if not confrontations.
Regrettably, Indian River County, though a small county by south Florida
population standards, has seen its loss of life and injured pedestrians and
bicyclists.  So, with that in mind, the county’s in-house transportation
planners -- known officially as the Metropolitan Planning Organization --
gathered with a state Department of Transportation representative, a DOT
consultant and a bunch of earnest local bicyclists last week to brainstorm
ways to limit the human road carnage.
“We really haven’t had a culture that has been bicycle-friendly,” said MPO
staffer Phil Matson, who played ringmaster at this two-hour session at the
county center. “But it’s an important strategic decision” to value bicycling
in the county, he noted.
There were local bicycle leaders such as Hugh Aaron, who founded a bicycle
and pedestrian safety advocacy organization called Bike Walk Indian River. And
Sharon LaPoint, president of the Vero Cycling bike club with its more than 333
paid members, attended, too.
A FDOT consulting company, Fort Lauderdale-based South Florida Commuter
Services, was also in the house with its owner, Jim Udvardy, and his two staffers.
The company has been helping the Florida DOT spread its “Alert Today, Alive
Tomorrow,” message in South Florida.
The gathering was a workshop, with 25 local residents, an Indian River sheriff’s
deputy and an engineer visiting from Lakeland sharing and swapping thoughts
on goals to improve road safety, targeted groups and methods to reach the
designated audiences.
Even a single person injured or killed on the road is regrettable but the
numbers show Indian River County has less per capita car versus bike and
car versus pedestrian crashes than most Florida counties. From 2005 to
2014, Indian River County had between nine and 12 serious injuries and
fatalities a year among bicyclists and pedestrians.
There’s no easy solution or single party to blame because the workshoppers
agreed everyone could use a dose of education from motorists who don’t
understand why bicyclists are in the roads to bicyclists who bike against
traffic or pedal at night without lights to pedestrians who try to run across four
lanes of traffic in between intersections.
In fact, the participants, who broke into six work groups, all liked the goal
of trying to establish mutual respect among all the road users as a way for
motorists and bicyclists and pedestrians to get along while getting to
where they want to be.

But there was consensus on one issue. As local bicyclist Pete Nebenfuhr
put it at the meeting, “There has to be motorist education to understand
that a bicyclist and pedestrian has a right to use the road. We have to
create a culture of being alert.”
The cyclists also knew that some people on two wheels need to change
their risky ways such as pedaling without helmets, biking against traffic
(that’s called being a “salmon”) and riding at night without lights. The
bicyclists themselves said safety messages need to address those
issues, too.
One driving factor behind educating motorists is that the county’s
senior-laden population includes older residents who may have been
taught as kids that bicycles were toys or were supposed to be ridden
against traffic. Matson, the MPO planner, pointed out that Indian River
County was the fifth oldest median age county in the country for counties
with more than 50,000 residents.
The one theme that emerged was improving relations between bicyclists
and motorists in the way they interact with each other on the road.
And LaPoint said another message should be sent, too: “Taxpayers,
your money is well spent if you improve the road infrastructure.”
Posted by Alan at 3:06 PM

"Improving the road infrastructure" unfortunately often means the laying down of more limited access roads that encourage higher auto traffic volumes and greater speeds, further marginalising bicycle and pedestrian usage. There is an emphasis on making driving "safer" whilst little thought is given to non-motorised users' safety.