I love cycling north along A1A around the Vero Beach area because I enjoy seeing the long-distance bikers with their rigs covered with panniers and bags and gear coming the other way as they slowly churn their way south.

My mind flashes back to my own personal long-distance journeys.

It reminds me of my two cross-country bike rides when I was pedaling across our great country carrying similar gear such as a handlebar bag, rear panniers, sleeping bag and tent. You let the day take you. I remember that no matter what happened, by the end of the day I always had a story to tell.

Today's A1A ocean ride -- one of the Escape Adventures Florida featured bike rides -- allowed me to intersect with a bicycle rider named Scott Acton, a scientist from the Boulder, Colorado area biking 15,000 miles to call attention to a new next-generation, space-based telescope called the James Webb Space Telescope that NASA plans to launch in 2018.

Acton was a scientist on the space telescope project and proudly wore the bike jersey displaying a photo of the mighty gear that will eclipse the Hubble telescope. 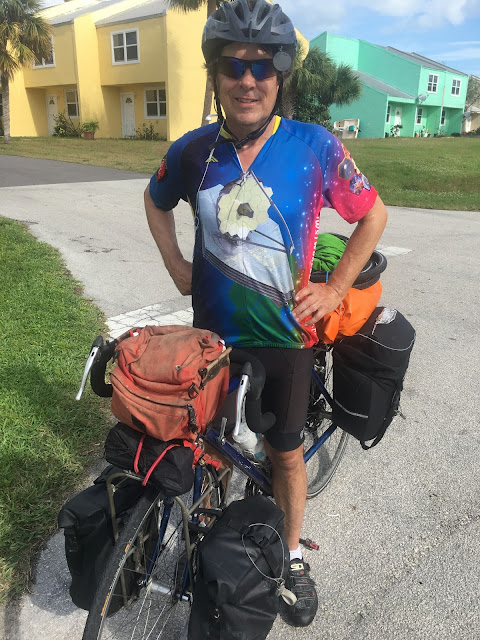 Acton left Boulder on April 1. He said his local newspaper, the Boulder Daily Camera, published a front-page story on his epic world adventure.

Indeed, I checked out the story and it was written by a former Rocky Mountain News co-worker, Charlie Brennan. (I had also worked for the Camera and the Denver Post and even freelanced for the Colorado Gazette back in my Colorado days).

What Scott didn't tell me is that he underwent quadruple-bypass surgery only seven months before he launched his bike journey -- that according to Charlie's story.

When I met Scott this afternoon, he had stopped on North Hutchinson Island in Fort Pierce just shy of the historic Little Jim Bait & Tackle shop to check out his cell phone for a map. I actually pedaled past him. Then, I slowed down, looked over my left shoulder and told myself, "Yup, go back and see what's up with this fella."

The pedaling scientist told me he was heading to Key West, with today's destination landing him in Jupiter in north Palm Beach County. He planned to stay the night at the home of a host who is part of the Warm Showers Community, which allows long-distance cyclists worldwide to grab a shower and a bed at an active host's place. To date, there are 47,848 Warm Showers hosts and 101,495 members.

I suggested to Scott that after he goes around the Fort Pierce Inlet that he take Indian River Drive, a gorgeous mainland scenic road that hugs the Indian River Lagoon between Fort Pierce and Jensen Beach instead of going over to oceanfront A1A. It was in the middle of the day, so I didn't expect Scott would face much traffic along Indian River Drive, which is a narrow road. And it would save four or five miles or so, too.

I wished Scott well and confess that I was jealous of his worldwide bike journey. He had already been to Europe and his next international leg was slated for New Zealand.

Keep on pedaling Scott and enjoy the stars at night.
Posted by Alan at 3:39 PM

Alan! It was wonderful to meet you today. I took your suggested route and it was a lovely ride. Thanks for giving me the recognition! It has been a tough ride of late, and your comments have encouraged me to keep peddling!

Glad that Indian River Drive turned out to be a nice ride for you. You'll enjoy the last 50 miles to Key West. Lots of Key hopping and the 7-Mile Bridge will be a highlight. Keep in touch!