Dear Mr. President, Let's Ride Bicycles When You're In Florida (So That You Keep Off The Twitter)

It's so cool that you enjoy Florida!

You're back in South Florida today -- and I live here too.

Today is such a sweet March day here in the Sunshine State for both of us. Strong tropical breezes off the Atlantic Ocean, yet the humidity is still low so that we're not sweating our balls off!

Yet, for some reason, when you come to Florida you seem kinda, well, stressed out and those fingers of yours go running across your cell phone and out pops another tweet that really grabs America by the . . . hmmmm, I'm not sure I better finish that sentence.

Well, anyway, you were back in Florida and back on the Twitter and out jumped this twittery gem.

Man, that's quite the doozy!

You're one intense dude.

So intense, that you threw in an extra "p" into "tapp."

So, here's the deal. Even your closest pals think you're overdoing it a bit with this Twitter thing.

Let's go bicycling instead of you twittering when you come to Florida.

Didn't you hear? Bicycling is the new golf!

I get stressed out, too, sometimes -- just like you.

But instead of tweeting I go biking.

You love bicycles. Well, maybe once you did, when you put on the Tour de Trump bike race back in the late 1980s.

You had the golden touch even back then. This protest stuff is not new. Check out some of these folks way back in 1989 at your bike race. 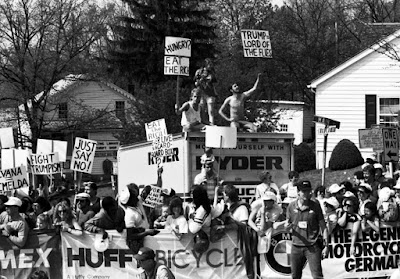 Anyway, I'm happy to take you out on a bicycle ride.

I have a bicycle for you. Or, I have lots of friends who would be happy to loan their bikes to you, too.

That's the beautiful thing about bicyclists -- we come in all shapes and sizes and political backgrounds, so we'll definitely come up with a bike for you to pedal.

No tweeting and biking. (And no Putin either).

i don't know what is more disturbing- the tweet itself or the "likes" and re-tweets. The paranoia on display here is truly frightening.

Love your sense of humor! More biking, less tweeting. If only....