I've turned into that grumpy old man in the neighborhood, yelling at speeding motorists endangering lives, drivers who turn in front of me while I stroll through a crosswalk and people who think racing to a red light to just sit and wait is more important than the safety of bicyclists and pedestrians.

So Sunday when I was on my morning saunter along South Pavilion Center Drive in Summerlin, I thanked a Las Vegas Metro officer for pulling over a driver in front of the new Howard Hughes Corporation baseball park being built along the road and a roundabout. The ballyard opens in early April. 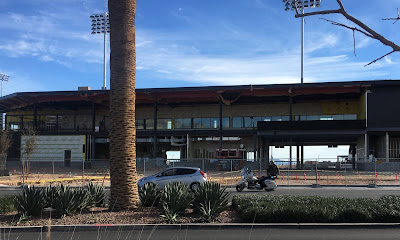 I wrote a recent story about pedestrian and bicyclist safety at the new $150 million minor league ballpark because I witnessed motorists who were speeding, inattentive and impatient along South Pavilion Center -- driving behavior that in my humble opinion will imperil the lives of people crossing the street to reach the ballpark and using the Pavilion Center Drive corridor.

You'll have to excuse if I am just a little agitated over motorist driving behavior. When an inattentive motorist slams his car into you from behind while you're bicycling and you survive thanks to the grace of God, you tend to get a little ticked off when you see people driving motorized vehicles in manners that could kill or maim someone. And yes, I have written a book about this.

And then there's Metro traffic police on motorcycles who can stop motorists, too, to conduct their own form of behavior modification 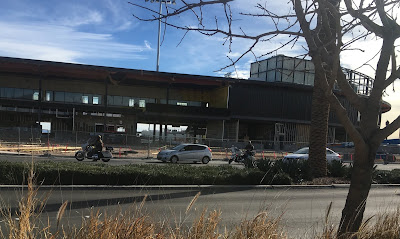 After the distracted motorist slammed his car into me in Florida, I returned to Las Vegas in June 2017 to launch LVSportsBiz.com. But I kept my Bicycle Stories blog alive because in a previous life I quit journalism and was a full-time community bicycle rights and safety activist in the Tampa Bay market. I see Las Vegas could use a little help, too, to protect pedestrians and bicyclists from deadly motorists, so I'll be lending my voice to this issue.

You'll be hearing more from me.