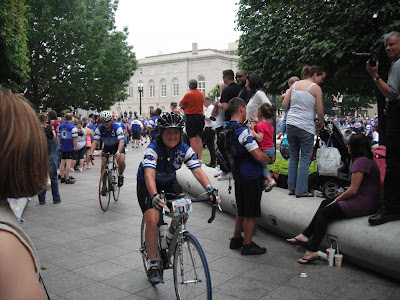 Ellen notes, "My friend Mark Parker, Orange Co. Sheriff's Office, Florida, was added to the NLEOM. Mark, and two other officers, were shot in an incident at the Orange Co. Court House in 1984.

"Mark was 19 at the time and was paralyzed as a result of being shot. Mark passed in March of 2009 after leading the fight to have all court security officers armed. My sister was on jury duty that fateful day. RIP Mark and thank you for all you have done.

"I have several friends on the NLEOM. I ride for every officer on that wall. God Bless them all."
Posted by Alan at 4:23 AM

Good Job Ellen, hope you and my other friend Frank had fun while partisipating in such a worthy cause.