As Moses Said, It's All About The Journey

It was century day. My brain sizes up my state of mind and if things are off kilter it orders up a 100-miler and I'm obliged to comply.

The winds were out of the west. and a bit out of the north. Yes! Dry air. And with wind direction out of the north slightly, it meant riding north first to get the headwinds over in the first half of the ride and then tailwinds for the second 50-mile chunk.

Around mile 16 north of Vero Beach on A1A I met this fella -- Adrian Morales, who I was shocked to be told by him that he was a 17-year-old junior in Central High School. He and his pal were pedaling 30 miles north from Vero and then 30 miles back. 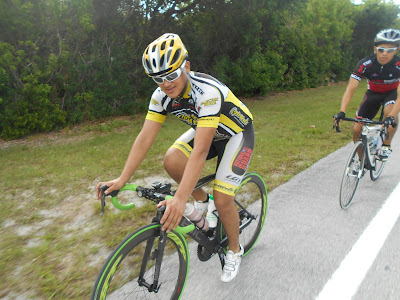 He was cycling a BMC with electronic shifters and he told me he finished second in his age group in a crit in downtown Stuart.

Then it was off to Melbourne. It was there where the inevitable anti-bicycle shithead screamer yells at me to get off the road and learn the rules of the road and punctuates it with his middle finger. It was pathetic crap. He stopped to allow me to catch up and then screamed some more.

It was the usual suspect, a guy in his 40s with thinning hair with scraps of baldness with a goatee and behind the wheel of a pick-up truck. And what I didn't see was the 10-year-old kid in the front seat, who had to witness his anger management flunkie dad go off on a bicyclist.

I did pop over the cool swing bridge at Tropical Trail over the Banana River. Take a look when it was in use today. 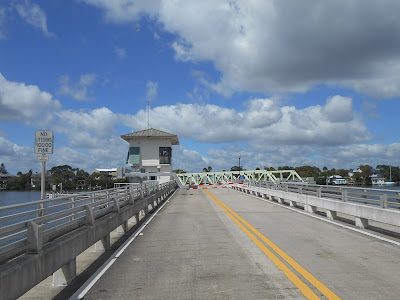 Over at the main street in downtown Melbourne, there was a mob packing a street art fair. I did squeeze through to get a photo of my old house where I rented an apartment some 15 years ago when I worked at the Florida Today newspaper for two anonymous years. Then it was back to Vero and I bought some snacks and water at a 7/11 in Melbourne Beach to fuel up for the final 35 miles of the ride. At the 7/11 I met the Rev. Scott Alexander, who is a Unitarian minister in Vero Beach and ultra bicycle rider who has staged four cross-country bike rides to raise money for food banks and to fight hunger. 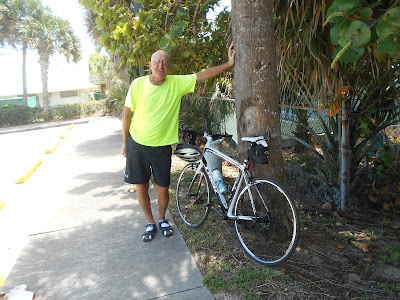 The Rev.Scott raises money to donate to Harvest Food and the Outreach Center of Vero Beach. You can read about him here in the Vero News.

He rides a nice Trek Madone with a straight mountain bike handlebar and has his cleats in sandals. Bicyclists come in all forms and with all types of goals.

Back home after the 102-miler, it was time to feed Pugsy and get some rest. 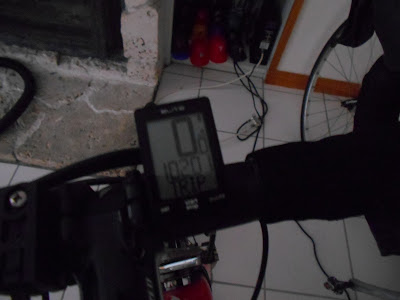