There's Only One One Stop 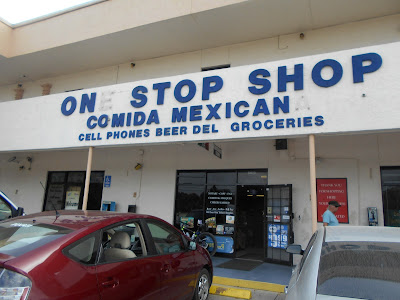 Oh sure, it’s a convenience store. I guess. There’s the prerequisite cheap beer and Florida Lottery rolls.
But in a world of corporate 7/11 and Cumberland Farms convenience stores, this is where this darling little store goes off the tracks.
Head shop gear in all colors in a glass case near the cash register.
Cowboy boots and cowboy hats -- and leather work boots too.
And a literal window in the wall off to the side where you place an order and a cook named Carmen fashions the tastiest fish tacos ($2.50) and chicken burritos ($3). 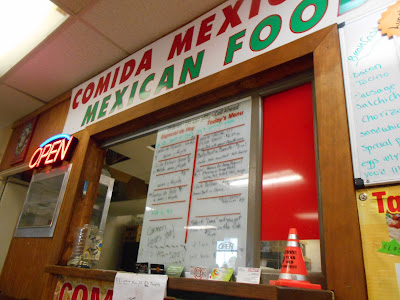 Beer. Not just the cheap stuff. There’s tasty and flavorful craft bottles to go with the Buds. 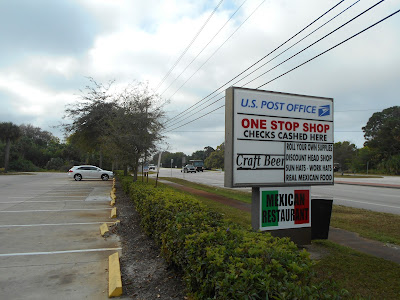 And for those public phone lovers, there’s a telephone bolted to the wall outside the front door. Thirty five cents is the price to dial a call.
#     #     #

The place is called One Stop Shop and it’s turned into my favorite convenience store in Florida. It anchors the south end of a small shopping plaza along U.S. in a small community called Wabasso about six miles or so of Vero Beach in Indian River County. 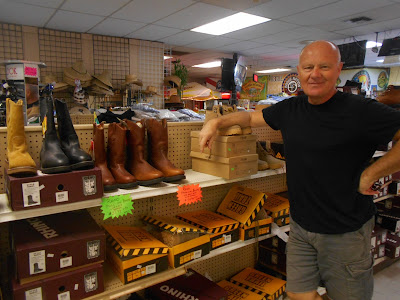 The owner is a friendly guy named Mark in cutoff shorts and a buzzcut on the side. He told me he bought the place four years ago for its check-cashing operation and the Mexican restaurant built into the store came with the deal. 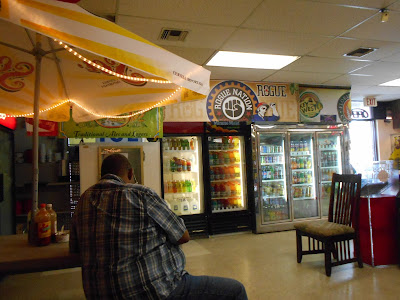 Wondering what is fueling all those landscape workers cutting those spacious lawns in Vero Beach?
It’s the homemade Mexican food churned out by Carmen, who starts cranking out the tacos and breakfast burritos at 6 a.m. when the store opens. Two weeks ago when I biked to One Stop two burly dudes were ordering four fish tacos apiece. On Thursday morning, five landscaper guys were carrying styrofoam boxes of the burritos and tacos. The joint is open from 6 a.m. to 6 p.m. Monday to Saturday but closed Sundays.
Wabasso looks like a poor town and not a place where people are buying $10.99 sixes of Sierra Nevada sixes of pale ale. But Mark keeps a healthy inventory of craft beer in the frig.
“I’m a home brewer,” he says.
It’s a mixed bag of items on the shelves. Work boots next to cowboy boots. Lotto tickets next to head shop gear.

Mark knows everyone who walks in.
But there was a time when he had to shoo away what he said were 15 drunks who sat in front of the store and catcalled women who were heading to the post office.
So he told them one-by-one to leave the joint and now there’s only one guy left.
“And he’s harmless,” Mark tells me.
#     #     #
Mark took a peak outside and saw my Surly Pugsley fattie locked next to a post.
“Must be a good workout biking that thing,” he says.
I explain the fattie can handle everything from snow to sand and that I rode it to Vero Beach to Wabasso’s beach out at the ocean.
Mark half-joked that he would buy one at Sam’s Club and ride it on the sidewalk back to his home two miles north of his store.

Mark said he's not much for brown ales, stouts and porters that I enjoy so he planned to bring in his dark beers for me to drink.

So, let's just say I will be back to One Stop.