Pedaling the Earth at Earth Day 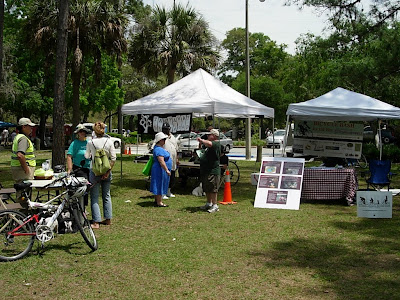 Four years ago I was bicycling south on North Boulevard in Tampa and saw a bunch of event tents at Lowry Park, next to the zoo.

I stopped by and found out it was an Earth Day event, put on by the local Tampa Bay Sierra Club chapter.

There were the usual environmental and greenie groups, but I was looking for a bicycle tent. I figured maybe a bike club or a bike agency or some group that supports cycling would be at Earth Day four years ago.

No dice. Bot s single sign of a bicycle table.

At that point in 2006, I vowed to man a table the next following year at Earth Day regardless of what I was doing at the time to spread the gospel about bicycling. And in 2007 I did, sitting at a table for Carrollwood Bicycle Emporium at Earth Day.

The following year (two years ago, 2008), I hung out with my friends at the tent of the newly-formed Seminole Heights Bicycle Club.

And today I was happy to say that I represented the SHBC and SWFBUD alongside tents of the Tempa Bay Bike Co-op and Tampa BayCycle --two other groups pushing bicycling in the Tampa Bay area.

We've come a long way in the past few years and we need to keep the momentum going.

Earth Day was a fun event today. It was originally scheduled for last Sunday, but rain postponed Earth Day so Marcia Biggs of the local Sierra Club shifted gears and re-scheduled it for today. Kudos to Marcia for sticking with the Earth Day event even after it was rained out last week. A city parks staffer informed her last week that Lowry Park was open the following week on the 25th, so Marcia booked the park and kept the Earth Day event alive this year. Well done, Marcia.

There were the usual suspects at Earth Day -- the outdoorsy, earthy folk, naturally.

And there was also the Butterfly Woman, who fluttered by the tent, which goes to show Earth Day is an event rich in unique individuals, and let's just leave it at that. 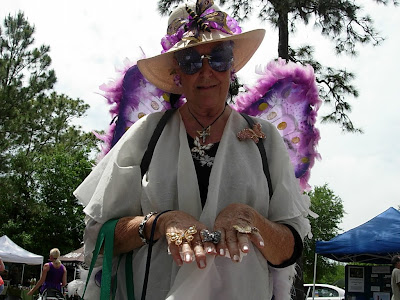 Donny from USF stopped by. Great saddle panniers -- reminds me of fishing tackle boxes mounted on to the rear rack. Sturdy -- and Doony even has a small lock on his carrying case. 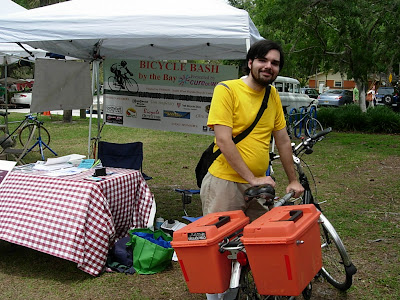 Fun event! Interesting group of people, and there were quite a few cyclists, even in a few unexpected booths/tents. Some of them wanted to talk about bicycling as much as what they were there for. ^_^

Donny, tell me about your "panniers". Are those the dry boxes for hunters commonly found at outdoor stores? If so, great idea?

If you could share details about how you mounted them, that would be great.

They are indeed dry boxes. These were purchased at a marine store (Plano 1812 XL, they also come in white or camo depending on where you buy them) which explains their bright orange hue. At the very least, motorists can't make the argument that they didn't see me without seeming foolish.

The original mounting design was snatched from a post over at BikeHacks.com (which has since been taken down, but here's an archive of it without the pictures).

The battery boxes he suggested were hard to find and too small when I did find them, so I originally used Wal-Mart plastic filing cabinets (which failed horribly after a month or so -- the plastic couldn't take the heat). In revision 2, I used the Plano boxes, and they work like a charm.

As far as mounting details, it's basically the two boxes with holes drilled for threaded rods to pass through. The rods are attached to each "side" of each pannier by a washer and a nut (8 washers/nuts per rod). One could say that it's overkill, but that thing is never going to just fall apart on me.

The rods are strapped to the rack by a strong rubber bungee that goes over the rods on one side, loops underneath the part of the rack that attaches to the frame beneath the seat, and comes back over the other rods again. Also, some rubber tubing is placed around the internal part of the rods where they lay on the rack to absorb some of the shock from the road.

They have held up for about a year now with no problems or signs of degradation, so I'm pretty content with the design. Sorry if this was too much detail! >_<

It just so happens I saw a pair of orange Plano boxes like that at a big-box store today and I was mightily tempted to buy them.

I'm still toying around with the idea of making smallish "panniers" out of .50 Cal ammo boxes. They'd be incredibly heavy and not good for carrying much, but the style factor would be through the roof...especially if the rest of the bike was military-themed.

Very true. I considered going the ammo box route a few times during my planning stage (it took a while to find the perfect boxes, and be able to afford them). Since this is my commuter/cargo bike though, it seemed a bit impractical.

I did use one a while back before I realized that "panniers" were an accessory on the bike (as opposed to an article of clothing ;-).

But yeah, if you already had one of the old WW1/2 military bicycles, they'd make great saddlebags. ^_^

Alan, thanks for the kind comments about the Earth Day festival. I'm a Bike Bash fan, too, as you know. Somehow, I missed the Butterfly Lady, so thanks for the visual!
Marcia

nice pic. You have a very good blog that the main thing a lot of interesting and useful! Bridging Tampa Bay , thanks