Racking It Up At T-Mobile Arena In Las Vegas

I'm glad Rick Arpin, his colleagues at MGM Resorts International and the folks at AEG included bicycle racks at the new T-Mobile Arena on the Strip. (MGM and AEG partnered on building the impressive new arena on the Strip between New York-New York and Monte Carlo).

As the stadium/arena reporter at the Las Vegas Review-Journal, I used to politely remind Rick -- MGM's arena pointman -- about the fact that people can bike to the arena and avoid the traffic jams before events.

But never saw this coming. Thank you Howard Stutz (the R-J's very talented former gaming writer) for posting this photo on Twitter and tagging me. 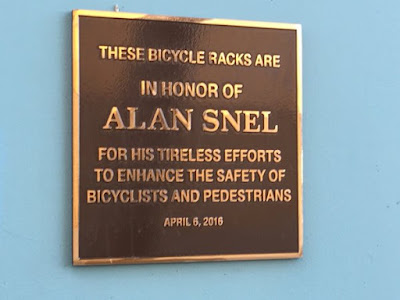 And thank you talented photographer Sam Moris, who has worked for both the Las Vegas Sun and Review-Journal, for posting this photo on Facebook,

OK, Las Vegas, please bike so much to the arena and use the bike racks that the arena has to install even more bike racks!

Congratulations, Alan! It's time you're recognized for your efforts.