Every June 1 I remember Bill Fox, a remarkable and passionate bicyclist who lived outside Middletown, NY,, a medium-size city about 90 minutes northwest of New York City.

I wrote about how bicycling changed Bill's life when I was a writer at the Middletown Times Herald-Record, talking with his lovely wife to learn how the bicycle helped Bill lose a lot of weight and then allowed Bill to share his love for bicycling with countless others so that they could improve their lives.

I am honored to wear Bill's jersey in his memory. 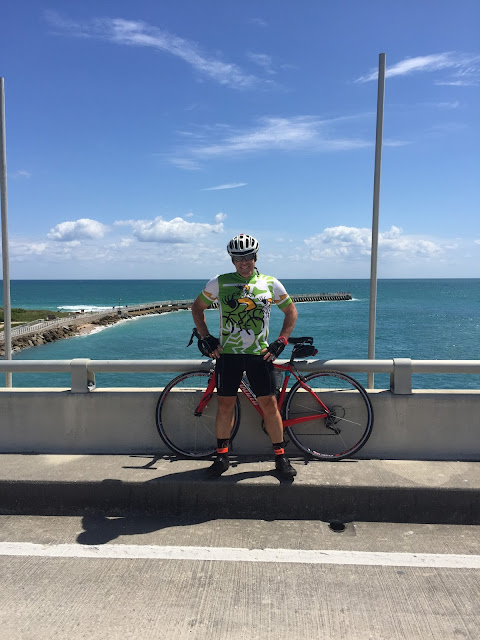 I met Bill only one time when we intersected on our two different crazy long-distance bicycle routes outside New York.

Bill was cycling from the Middletown area into New York City, while I was biking around the Hudson Valley on a whimsical ride to see how many Stewarts ice cream/convenience stores I could hit on a 100-mile bike ride. (I met Bill at a Stewarts outside Goshen, NY and included Bill in my bike ride story.).

In Bill's memory, I created my own memorial bike ride for Bill in 2005 when I biked 158 miles from New York City to Albany, NY in one day. My Tampa pal Jeff Houck did an amazing job on a live blogcast of that memorable ride.

I also did a 170-mile Atlantic Ocean (Vero Beach) to Gulf of Mexico (Clearwater Beach) ride all on State Road 60 to remember Bill with the help of SAG driver Steve Swiger and other friends such as Ellen Pierson.

Here's a nice post on that ride eight years ago by Jack Sweeney, the famed Ghost Rider.

I will always remember your bicycle spirit. Bill Fox.
Posted by Alan at 6:27 AM