Why bother trying to arrange meetings when you can let Interbike's magic red carpet take you to random collisions with people from your past. 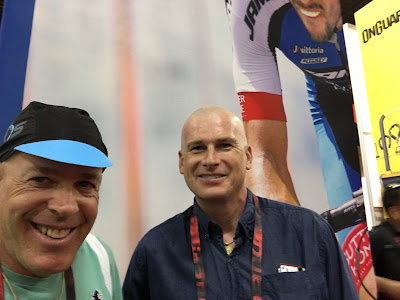 Why am I in the bicycle world?

It's because of David, who used to own Carrollwood Bicycle Emporium in Tampa.

I left the comfort zone of newspapering to work five months on PR for David in 2006 and we worked together to launch the Tampa Bay Bicycle Bash festival and then SWFBUD -- South West Florida Bicycle United Dealers.

David ultimately sold CBE to Brian Eckman and the Carrollwood shop is now owned by David Sanborn, who owns at least a dozen Trek dealerships around central Florida and Tampa Bay.

David gave me my break in the bicycle industry a decade ago, allowing me to leave journalism for seven years and promote bicycling in the Tampa Bay market on behalf of the bike shop owners group called SWFBUD.

He now lives in Hammondsport, NY in central New York state's wine country and has a business that makes furniture out of used wine barrels.


Steve Toll of Tampa was sitting on a toilet seat after a bike ride more than 10 years ago and his butt was killing him.

So, he took the toilet seat concept and ran with it all the way to a successful bike saddle company called ISM.

The former Tampa police officer and jeweler also was a huge supporter of SWFBUD and my bicycle reform efforts in Tampa Bay and we always have a marvelous dinner on the Sunday night before Interbike.

And Steve can be a little goofy too. 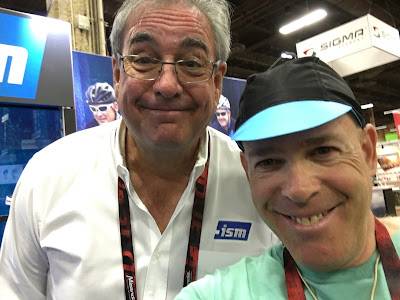 
When I moved to Las Vegas four years ago, I read a local alternative paper that featured a kick-ass writer named Sarah Jane Woodall.

That girl could spin some words. And lo and behold, I met Sarah Jane on a Blinking Man bike ride in Vegas a few months later.

And she also works lots of trade shows -- and once again I saw Sarah Jane with a bicycle today. She's fresh off her stint at Burning Man, where she collected two more bike cruisers. Impressive bike collection, Sarah Jane.

But in person, Sarah Jane didn't seem to violate any standards and was a fun person to talk with. 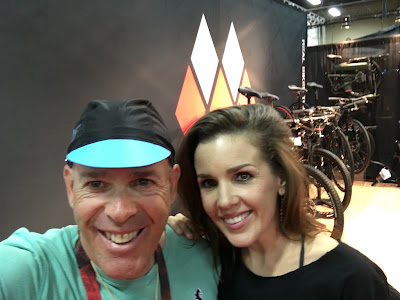 
John Schubert is a big proponent of riding your bicycle in the traffic lane like any nother vehicle on the road.

And he's an instructor for the CyclingSavvy bike education program, which teaches bicyclists best practices on pedaling the lane 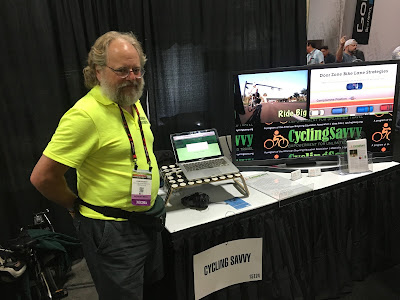 Remember bicyclists, stay away from the road edge.