This morning at 7:30 AM Tampa Mayor Bob Buckhorn donned a bike helmet and hopped on a Tampa Police bicycle and pedaled about two miles from Davis Islands to downtown Tampa and the Tampa Police headquarters for a fun bike-to-work event put on by the Tampa Downtown Partnership.

The mayor pledged his support for bicycle safety, joking that's he's more into three feet distances between bicyclsists and motorists than the famous six-foot distance he supported between strippers and customers when he was a Tampa city councilman years ago.

Tampa Police also unveiled its 3 Feet decal program on the rear window of its police cruisers and its bike safety campaign. Thank you Assistant Police Chief John Bennett for pledging the police support. 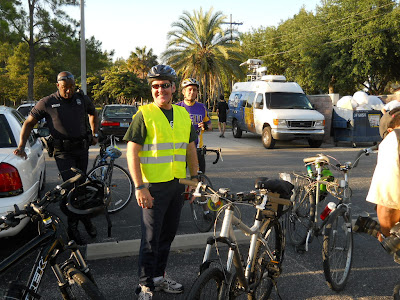 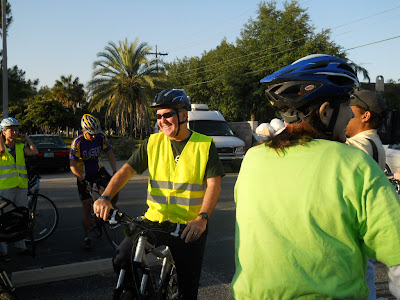 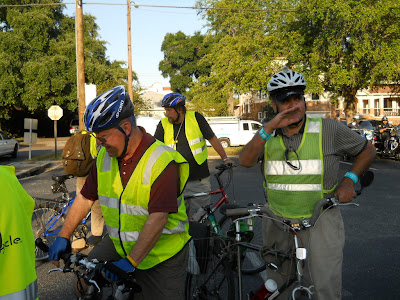 There's Lea, Tony and Gena -- three fine bicyclists who appreciate the value of bicycling in Tampa. 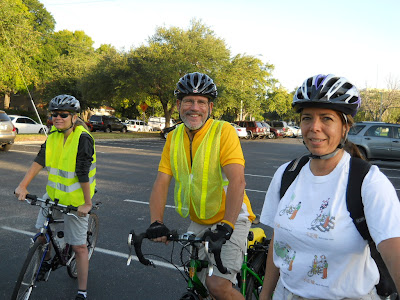 There's the fast-growing son of MPO staffer Gena Torres, who has worked on a local bicycle safety action plan. 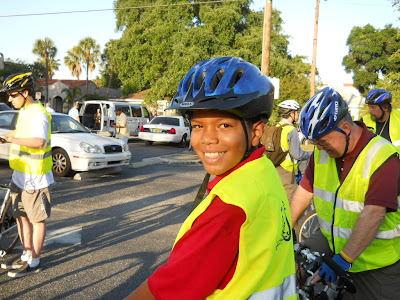 Biking on Davis Islands as we head for downtown Tampa. 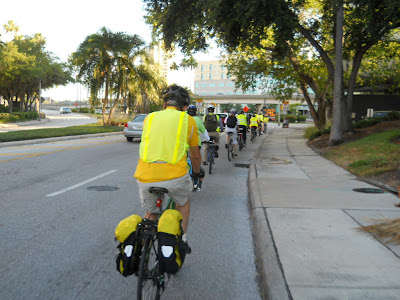 Mayor Bob comes off the ramp and on to Bayshore Boulevard. Bob quipped as we biked on Bayshore, "Someone call the mayor and tell him Bayshore needs to be fixed." 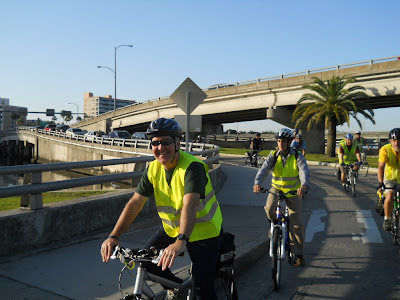 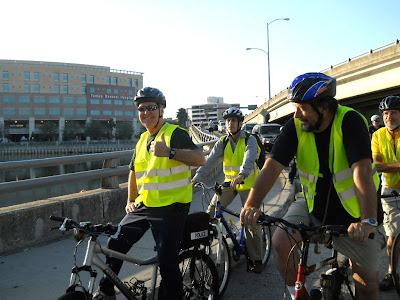 There's the proof that Bob is a good bicyclist -- the mayor passes me on the uphill of the Platt Street Bridge, blowing me away like Lance did to the field in the French Alps during the Tour de France. 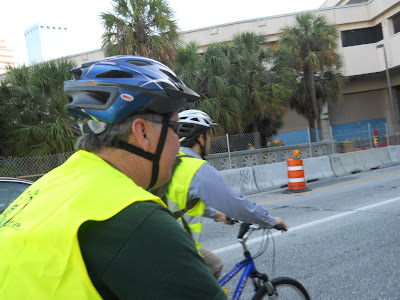 The mayor is happy after crossing the Platt Street Bridge with his life intact. 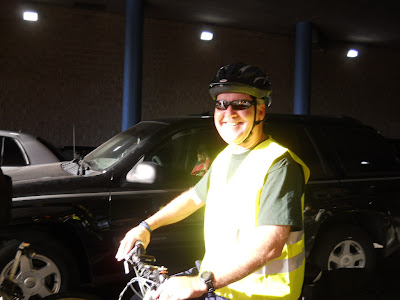 The mayor gets ready to turn left on Franklin. 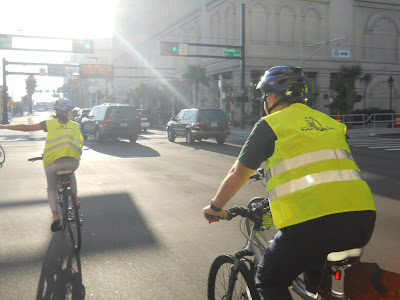 Mayor Bob and Gena Torres of the MPO who works on bike issues side-by-side as they head for the Tampa Police Department. 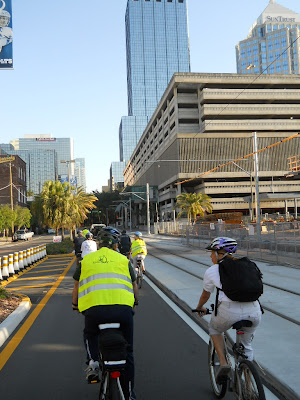 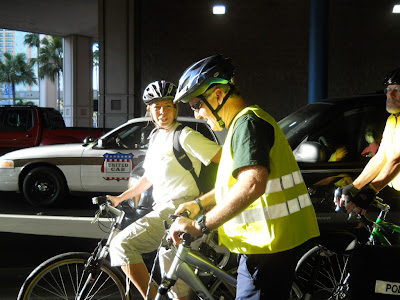 Mayor Bob chats with my friend Tony of Seminole Heights. 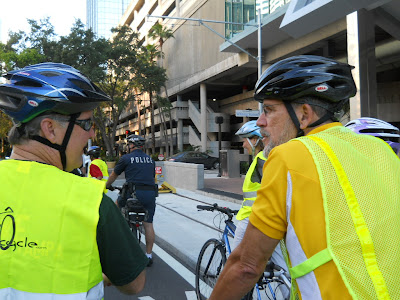 There's Sheila wearing a Downtown Crit T-shirt chatting with Mayor Bob. Sheila was one of the earliest downtown residents. 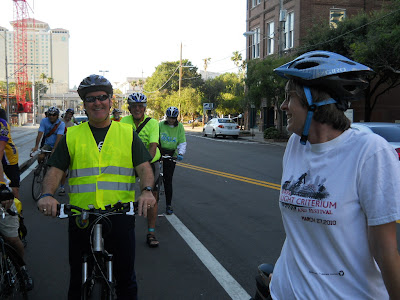 Group shot with the mayor. The mayor has his arm around me as I keep Bob up on his feet after the two-mile ride -- ONLY KIDDING! Seriously, Bob did great on the bike and his cadence was excellent. He had the RPMs up and looked like a natural bike commuter. 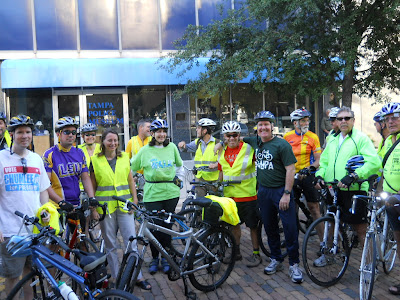 Great job Karen Kress of the Downtown Partnership for bringing Mayor Buckhorn and the Tampa Police Department together for the bike to work event and the TPD Share the Road squad car decal program and bike safety campaign. 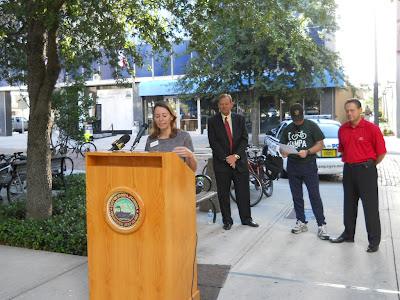 Mayor Buckhorn addresses the media with the Bicycles Are Vehicles message on the portable sign that TPD District II uses in Seminole Heights and other locations. 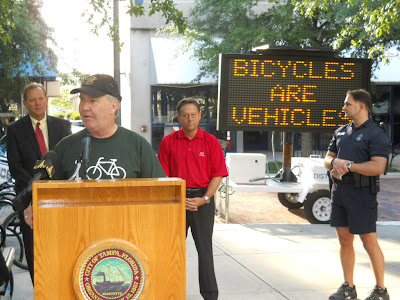 A look at the Tampa Police car with the share the road decal. Thank you Stadium Toyota on Dale Mabry Highway for underwriting the costs for the decal. 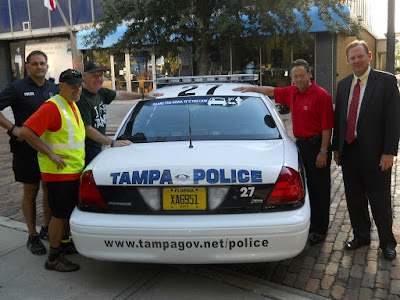