Travels Through North Carolina For Ellen 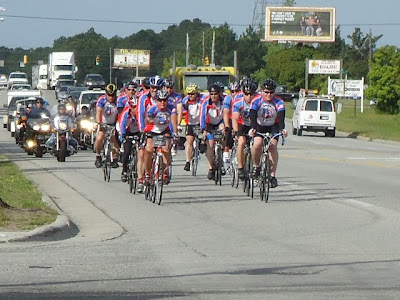 We departed Wilmington enroute to Jacksonville, NC. We stopped at the site where Deputy Steve Boehm, Onslow Co. SO and Verona Firefighter Gene Thomas were killed. His widow and children were present and rode in with members of the Blue Knights.

We then stopped at the Onslow CO SO for a mtg with Sheriff Ed Brown and lunch. We then headed to Kinston.

First time I have ever gone 28 mph on a flat road. We had a pace line going strong and were racing in to avoid rain. We were being followed by Major Rickie Pearson of the Lenir Co. Sheriff's Office. Major Pearson lost his son Allen in 2009.

Kathryn Pearson, the widow of Deputy Pearson, and Mayor BJ Murphy came out and greeted us in the rain.
Posted by Alan at 7:26 PM