Cynthia Finnegan, who lost her son Matthew Hunt when a motorist struck him while he bicycled on the Strip in Las Vegas on Aug. 3, 2015, told me this week that was the sentence meted out to the driver, Breanna Jimeno. 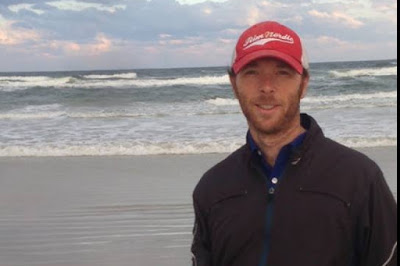 Cynthia said Lindsey Moors, the vehicular crimes unit prosecutor in this vehicular manslaughter case, informed her of the sentence agreement under the plea deal this week after the driver plead guilty.
"I am just plain sad," Cynthia said. "I asked the DA if she (the driver) seems upset about it and she said yes."
Jimeno, 23 at the time, was driving a 1998 Ford Mustang when she clipped Matthew's bicycle when changing lanes on the Strip near Treasure Island and Spring Mountain Road on the way to work because the motorist says he was in her blind spot, according to Moors, the prosecutor. As a result, Matthew landed on the passenger side of the front window of Jimeno's car before landing on the pavement. Matthew was leading a bike tour with one customer at the time.

Matthew suffered critical injuries from being struck and would pass away six days later on Aug. 9, 2015. The married father of two was a bike tour leader. 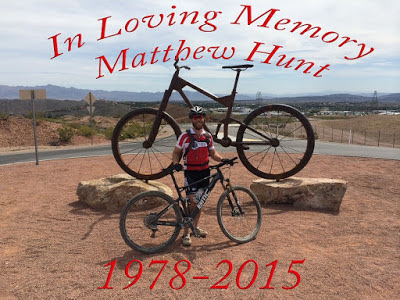 Jimeno stayed on the scene and cooperated with investigators.

Moors said the driver, Jimeno, was not distracted or using a cell phone. Moors said the crash happened, according to the driver, because the motorist said she did not see Matthew when passing him because he was pedaling in her blind spot.

She said the motorist showed no intent to strike Matthew with her car. And based on the circumstances, the criminal culpability was at the negligent level -- the lowest level just below reckless. She said the police officer and another attorney in the department's screening office also recommended a negligent crime instead of reckless.

My question is simple: How can a motorist clip a bicyclist when passing and have the bicyclist end up landing on the front window's passenger side? It was a morning bike ride when traffic is typically light on the Strip and motorists should be able to see other users of the road such as a bicyclist.

The harshest penalty for negligent vehicular manslaughter, a misdemeanor,  is six months in jail and a $1,000 fine in Clark County.

In this case, Moors said she was not confident that she could get jail time if the case went to trial before Justice of the Peace Suzan Baucum because the driver did not show intent to strike Matthew.

Cynthia took this away from the explanation.
"I had said to her as long as you obey the law you can kill people people on bikes and nothing will happen to you," Cynthia wrote to me in an email. "That is when she (the prosecutor) gave me other situations besides bicycles."
The driver is also responsible for restitution for any expenses not covered and is due in court May 16 for the restitution.

One big takeaway: Motorists, you need to concentrate on blind spots when changing lanes. In this case, failure to see a person on a bicycle cost a man his life and took him away from his family.

Matthew's death has weighed heavily on bicyclists in Las Vegas.
A month after his death, about 500 bicyclists held a rally in Summerlin in early September 2015 to bring attention to motorists and bicyclists using the roads together.

And the response on Facebook has been one of anger and sadness.

This is so wrong... disgusted!!

90 days house arrest, while we are left with a lifetime of sadness...
#PutDownYourFuckingPhones
Show Attachment

Cynthia put it simply, "No winners," after learning the motorist's sentence.

Cynthia has been a constant champion for her son's memory and safety for bicyclists and can retain some peace that her son's organs are alive in the bodies of other people.

"All five of them lived through their transplants! I found that out in November."