Steve Toll had just heard that Salt Lake City was no longer in the running to host Interbike after the national bicycle trade show leaves Las Vegas after this year's September show.

So, Steve, founder and owner of the ISM bike seat in the Tampa, Fla. area, had an idea for Pat Hus, the guy who runs Interbike for Emerald Expositions.

Let's have Interbike in Central Florida starting in 2018.

Steve said Interbike should be held in January at the convention center in Orlando after the holidays when bike retailers could use a nice warm and scenic place to get away to. 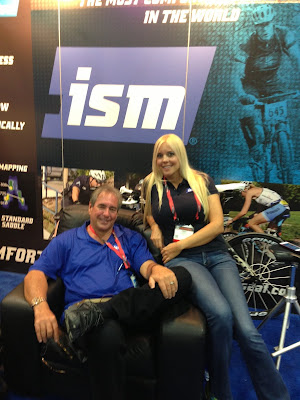 "Central Florida has the convention center, the infrastructure, the hotels to handle Interbike," Steve said.

Plus, Central Florida has Santos for the mountain bikers and the "Alps of Florida" where road bicyclists can try out bikes on Sugarloaf Mountain and Buckhill Roads in the Clermont area.

"There are only positives. There are no negatives," Steve said.

Bicycle Retailer and Industry News (BRAIN) reported that Interbike said Thursday it would no longer consider Utah as a place to stage Interbike in Salt Lake City over the issue of public land use in Utah.

Interbike is leaving Las Vegas after this year's show at the Mandalay Bay Convention Center Sept. 20-22.

Interbike, once held in Anaheim, is also looking at venues in California.

What a great idea. Win,Win,Win for manufacturers, distributors, and hands-on buyers to
zone in on cutting edge R&D and a chance to road-test and relax in gorgeous Florida weather. What a Deal!!!!

Yes, Central Florida would be ecstatic to welcome Interbike!