My sister lives in South Florida, where she loves bicycling. But she feared pedaling from her home on a busy road to the Hollywood Beach boardwalk and the Dania Beach pier in south Broward County.

Lots of fast-moving cars. Narrow roads. Crossing U.S. 1. The bridge over the Intracoastal. All seemed so daunting that she never dared making this bike ride.

So, on Sunday morning I went to my sister's house with a simple purpose in mind -- bike with my sister and her husband from their place in north Miami-Dade County to the Hollywood Beach boardwalk and then the Dania Beach pier. About a 20-mile road trip.

And it was amazing. 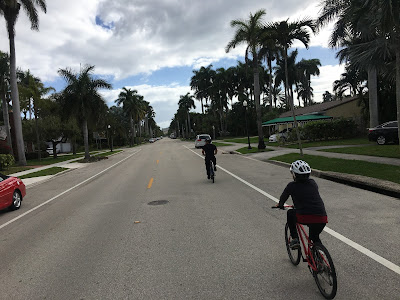 The joy my sister felt by biking to a place she thought was impossible to get to by bicycle lasted for days. She's still on a high from that a bike ride.

And it was a fun, stress-free bike ride for one reason.

We drove our bicycles on the road as if we were driving a motorized vehicle.

My sister learned to bike toward the center of the road and to stay off sidewalks.

We biked in the center of the lane outside parallel parked cars to avoid being struck by a car door that could open.

We biked down the middle of the through lane instead biking in the right turn lane when going straight through intersections. We stacked up behind cars at red lights instead of squeezing next to them when there were no bike lanes.

We biked in the center of the lane when passing side streets so motorists on those intersecting roads can see us earlier. We stayed away from the road edge on these narrow streets.

If a motorist was behind us and the opposite lane was clear, we waved them around. We communicated with motorists.  No hard feelings. No horn blaring. No cursing. Just bicyclists and motorists using the public road and getting where we all needed to go.

"Now I feel confident because I know there are rules to bike by. I will stay off the sidewalks," my sister said.

It was Sunday morning between 10 a.m. and 11 a.m. as we biked to Hollywood Beach. The busy road that my sister lives on turned into a more quiet residential road when we crossed a busy east-west road near her house.

So we used that road to head north. We then took a turn to reach Dixie Highway, where we took the lane because the one-way road had passing lanes for motorists to pass us. Then, we turned right on Hollywood Beach Boulevard and headed east to the beach. We pedaled through the downtown on the mainland and kept away from the parked cars, biking outside the "door zone" of each parked car.

The boardwalk -- the place my sister never thought she would reach by bicycle.  And we were all here.

We stopped at Josh's fruit stand on the boardwalk and enjoyed some healthy celebratory smoothies. 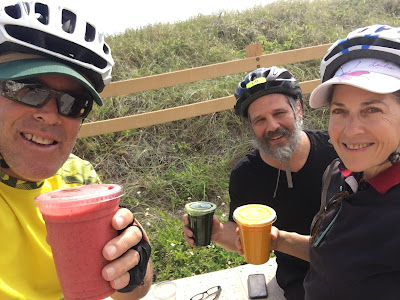 But we had not reached our turnaround. There was more ground to cover. We biked along the designated bike path on the concrete Hollywood Beach boardwalk to Dania Beach. My sister enjoyed seeing the ocean from the seat of her bicycle. 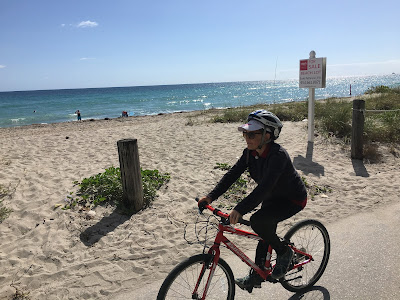 Dania Beach includes a road that has a bike lane, so we followed that path to the Dania Beach Pier, which allowed for wonderful views of the ocean. 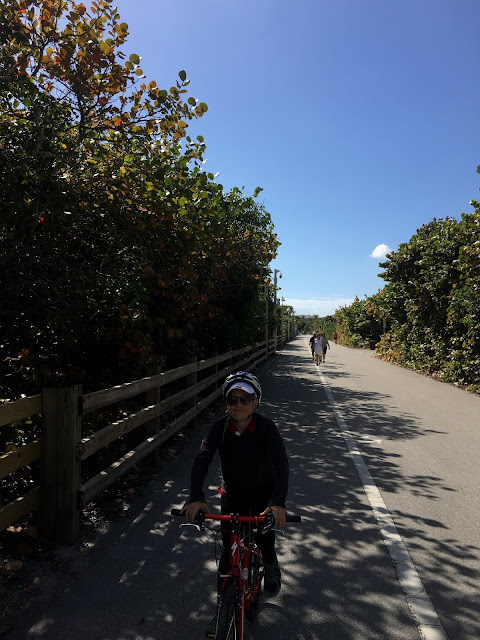 The pier was our turn-around area. 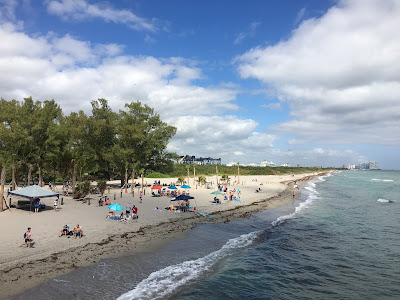 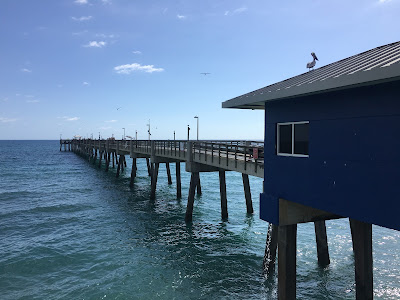 My sister learned that by following a game plan and driving her bicycle just like a motorized vehicle that she can bike to places she previously thought were off-limits. On the way home, my sister's husband even showed us a different route through Hollywood Beach and we even biked on US 1 for a short stretch, which was easy because it had a very wide bike lane before we took a turn off US 1 and headed back to their house.

Bicycle education is the key: bike in a predictable way and stay away from the road edge and sidewalks.

Bicycles are simply slow moving vehicles and have an equal right to the road.

Now, places are within reach via two wheels for my sister.

I have no formal affiliation with a great bicycle education program called Cycling Savvy but they have an official bike education program that goes into detail about bicycle position in traffic lanes and how to stay safe out there. Instructor Pamela Murray tells me that bicyclists can learn all this in a weekend during 10 hours for only $95. This is how Pamela put it:

"You really can go wherever with enough education, experience, planning and preparation.  I know there's no way I'd be able to ride to as many places if I hadn't taken Cycling Savvy."