Arnold 'Will Be Back' On His Bicycle (And Other Bikey News) 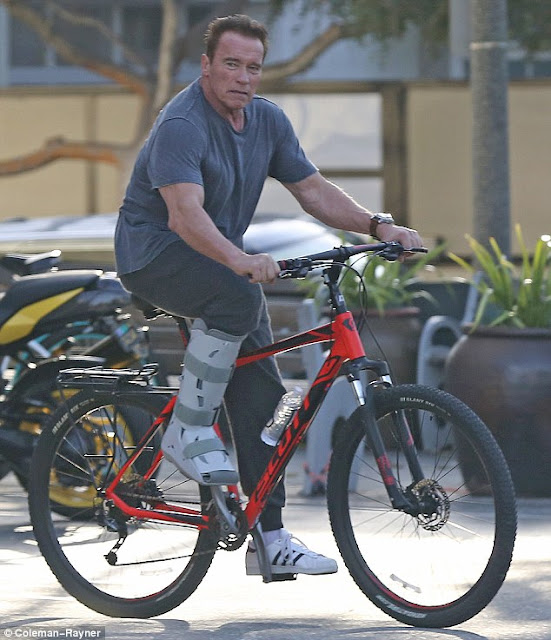 It turns out Arnold is just like the rest of us.

He's not going to let some dumb leg fracture keep him off his bicycle.

The Terminator Man was pedaling around Venice Beach a few days ago -- just the right place for this muscleman.

Fun story posted by the Daily Mail talks all about Arnold and the former California governor bicycling with his giant walking boot.


My friend Joe Capozzi's video is on fire lately.

People can't get enough of watching a Burmese Python squeeze the life out of an alligator in a swamp in Big Cypress -- a scene that Joe captured on video while riding his bicycle on the preserve's Loop Road.

I love this story because Joe -- a Palm Beach Post reporter who I know for more than 20 years -- used an essential tool to get into position to witness this tropical ballet between two top-tier oldtime predators.

When you're pedaling the bicycle, the mode of transportation moves at just the right speed to detect life all around you while moving fast enough to cover a lot of ground.

Even here in Vero Beach, I have uncovered several business stories to report while pedaling on roads by checking out real estate signs and setting up real estate stories.

There are so many great things about bicycling -- from enhancing mental and physical health to being a great form of transportation.


Bicycling also got a nice mention in this story posted on the Las Vegas Sun web site about the First Couple of Las Vegas -- Oscar and Carolyn Goodman.

The reporter uses an anecdotal lede about the new mobile bike renting program in Las Vegas (known commonly as bike share) that started a few months ago to kick off a story about the Goodmans still doing their thing in Sin City.

It could have happened to any one of us.

A bicyclist in Weston was cycling in a bike lane in that west Broward County, Fla community on an early Sunday morning when a person drove his or her car into a cyclist and killed him.

Christopher Mohr did that day and the driver fled from the hit-and-run.

More than 200 cyclists pedaled this past week in a memorial bike ride to remember the fallen bicyclist.


Someone is celebrating a birthday in 2017.

The bicycle -- or its kinda early form of it -- is turning 200 years old and Mannheim, Germany is throwing a birthday bash.

Just a friendly reminder to buy a strong lock and secure your bike because here's yet another story about bicycle thefts.

This time, it's about the increase of bikes being stolen on the University of Washington campus in Seattle.

I've had my fair share of bikes stolen -- my last bike that was ripped off was locked at the UNLV campus even though I used a sturdy cable lock.

But with bolt cutters, cables are easily snapped and bicycles taken.

The Red Bull-Trans Siberia Extreme race requires a $20,000 entry fee and Carnal is trying to raise $10,000 by the end of the month.

Carnal is a long-distance bicycling maven, a pedaling marathon man who biked a fixie across the country's southern tier.


And we end with this young fella. 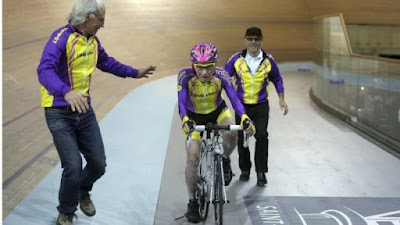