No Go On Selmon Expressway

You won't be seeing this scene any time soon. 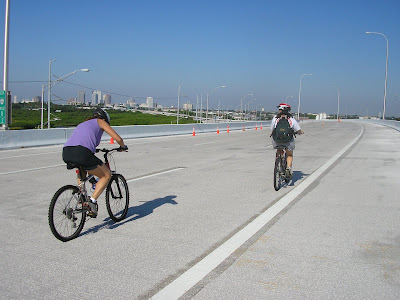 The Highway Authority's executive director. Joe Waggoner, estimated it would cost $118,520 to $133,270 -- mostly on temporary barriers -- to hold a bicycle ride on the top deck of the Selmon Expressway.

Naturally, for that money, the Authority board decided against allowing bicyclists.

I had requested the Authority board look into bike rides of only two or three hours on an occasional early Sunday morning. But Waggoner came back with toll losses for an entire weekend -- not just the two- or three-hour period of a bike ride.

The board did instruct the executive director, Waggoner, to continue discussing the matter with SWFBUD and any other interested parties.

Waggoner said railings must be 54 inches tall for bicyclists. He said the current barrier railings are 32 inches on the top deck.
Posted by Alan at 4:46 AM

I am not surprised. You are getting a typical response for a bureaucrat. Are you kidding me? Temporary barriers for the ride would cost 130+k. Are you kidding me? For a 2 hour to 3 hour ride? Who the hell is going to be paid off? I could see a cost of a few grand, but for what they are estimating? Those bureaucrats are showing their true colors.