Pugsley Goes For A Roll In Red Rock

Every time I take Pugsley out for a hilly course, the fattie bicycle never lets me down.

I have used Pusgley and its super-fat tires and single gear to bike to Blue Diamond and back to Summerlin, and also from downtown Las Vegas to Summerlin -- both rides that gain elevation of more than 1,100 feet.

The Pugsley gear setting for its single is perfect as I spin comfortably up sloping hills. 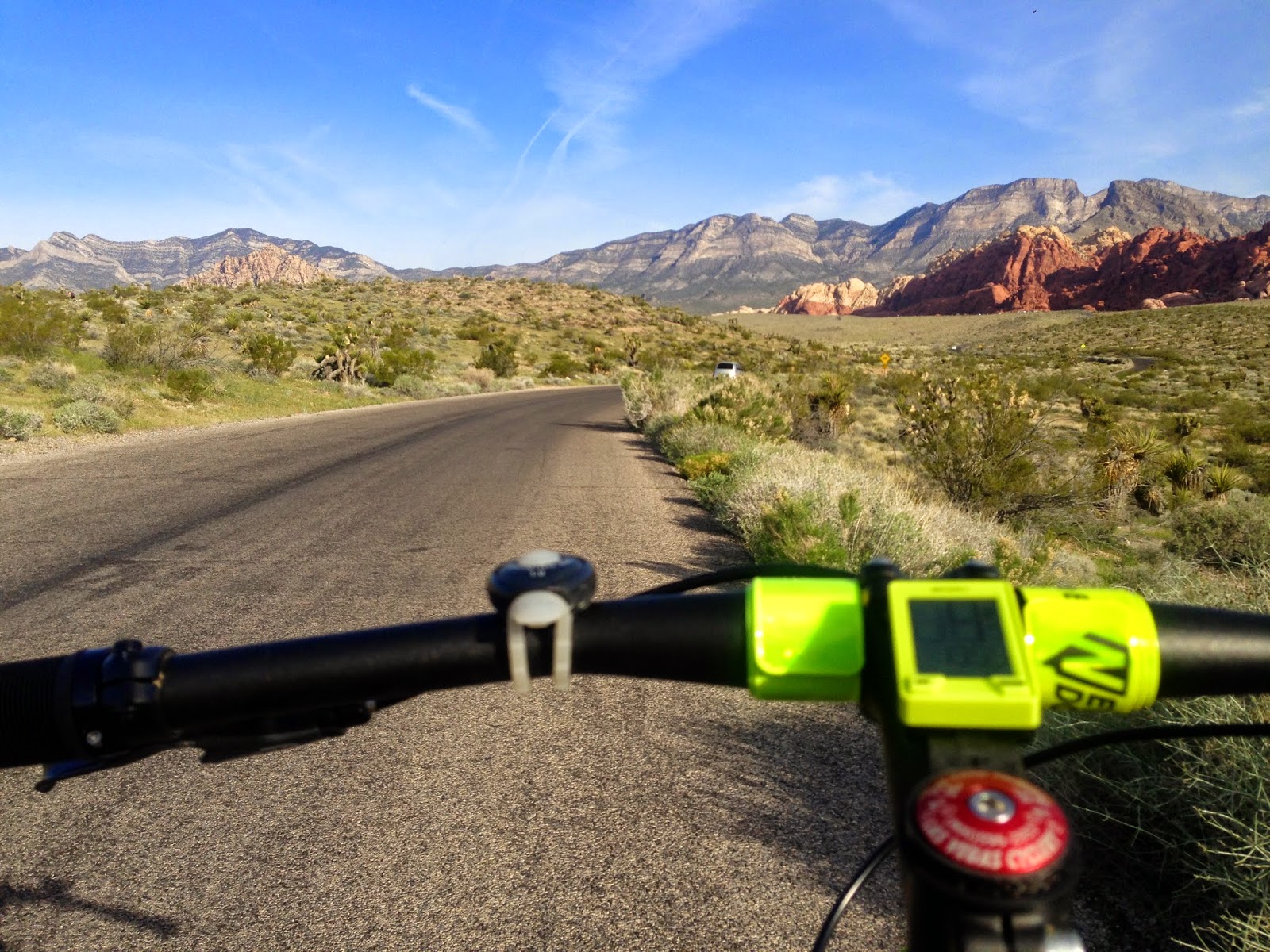 The Pugsley did remarkably well up in the steep grades of the Red Rock Scenic Loop.

And it was helpful that the colorful scenery along State Road 159 was lovely as well. 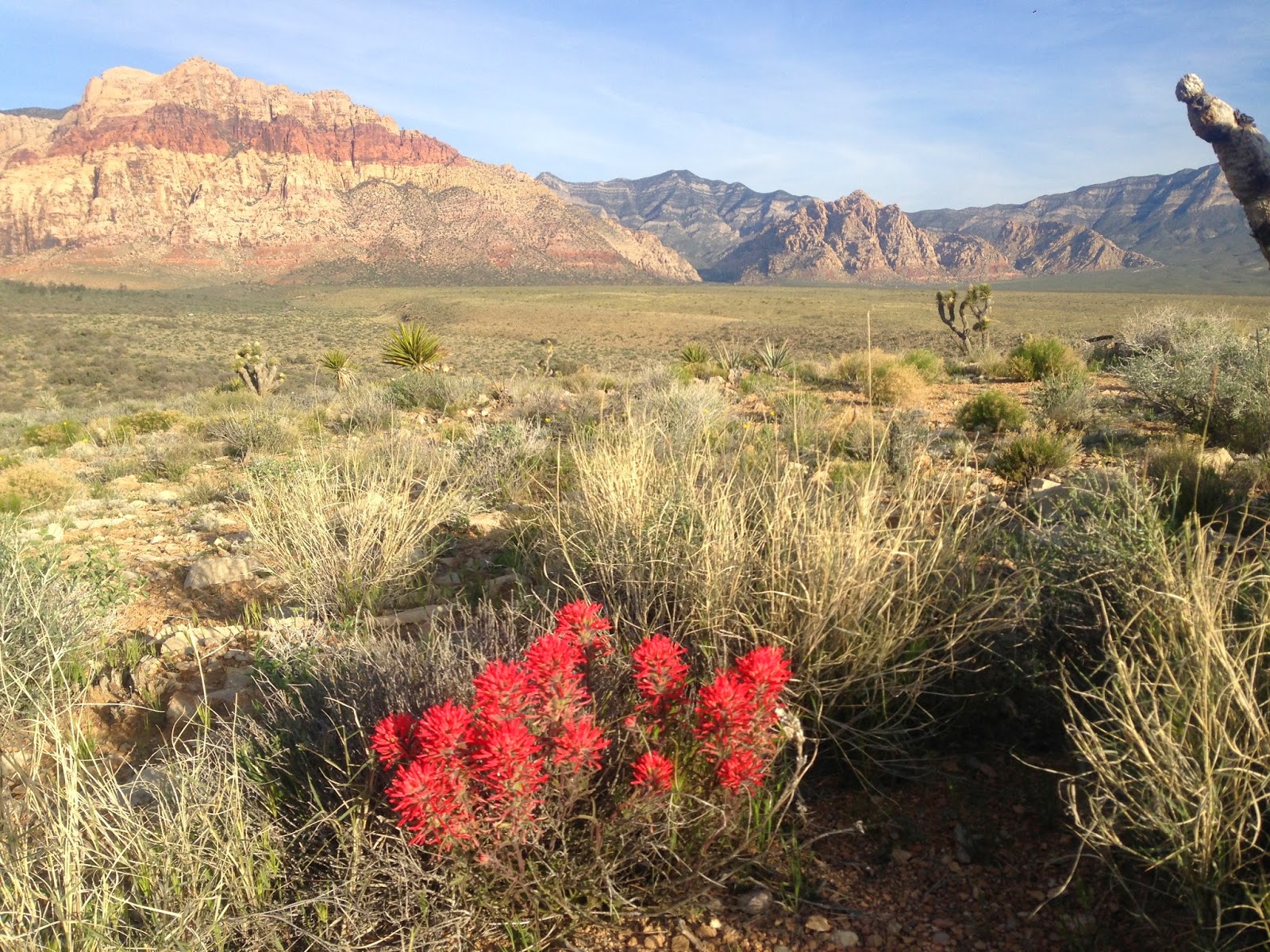 Following The Flowy And Rocky Trails In Red Rock Canyon 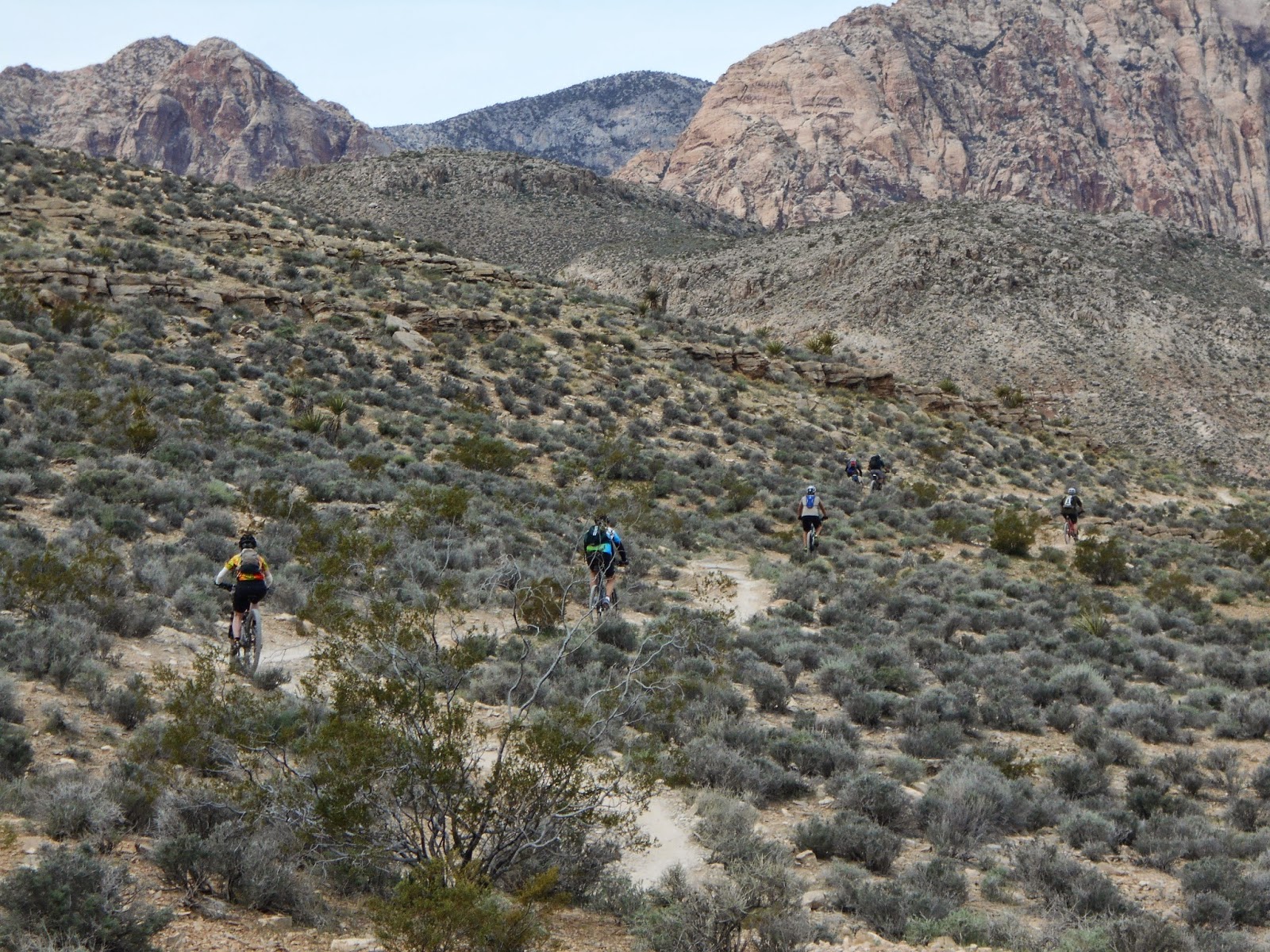 Sunday's version of the Red Rock Fat Tire Festival was a relaxed day of breakfast of French toast and fruit to fuel a 12.8 mile ride along flowy and sometimes rocky trails in Cottonwood Valley outside Blue Diamond, a tiny community of 300 people or so 25 miles west of the Strip.

About a dozen of us on a variety of fat tire bikes -- I used the single-speed, shock-less Surly Pugsley, of course -- followed our fearless leader, expert mountain biker and pedaling marathon man Jared Fisher, owner of Las Vegas Cyclery and Escape Adventures.

Jared has pedaled every inch of every trail outside Blue Diamond, where he lives his wife Heather and four kids.

Our motley bike crew included two couples from San Diego, a guy visiting a convention on the Strip from British Columbia, another friendly dude from the Twin Cities of Minnesota, a couple of local roadies and Jared's pals, Rob and Brian, who offered tips and were the sweepers. 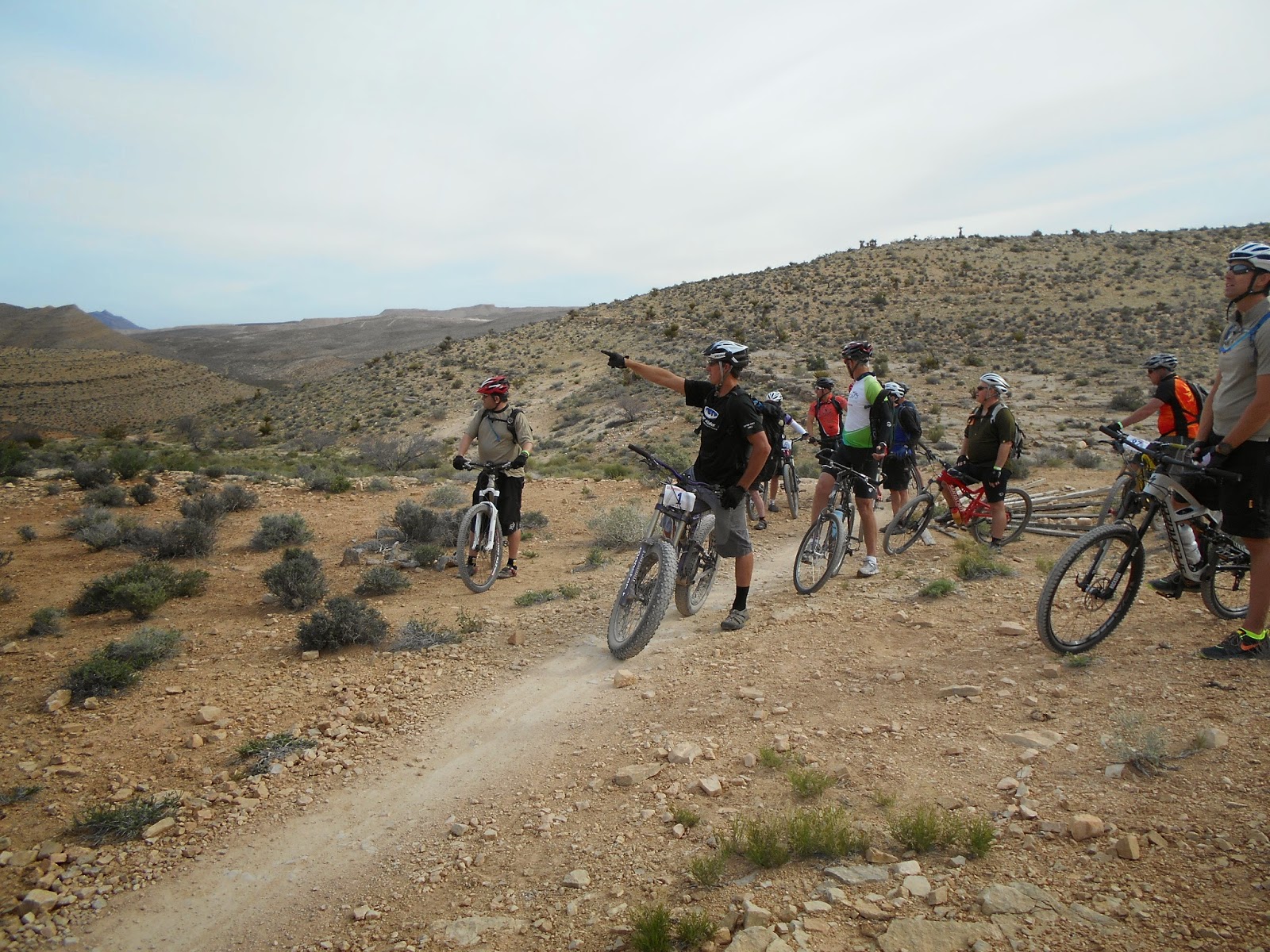 There's Jared in story-telling mode. He has a million amusing tales, including about his attempt to cross a raging flood water along a Cottonwood trail that ended with his the fast-moving waters plucking his 50-pound mountain bike away from his body and sending it downstream, He ended finding the bike, but it needed a serious overhaul, as the day's mountain bikers listened with rapt attention.

The trails moved up and down, sometimes offering flowy and smooth single-track notches amid the desert landscape of prickly plants and just blooming plants. Sometimes, the trails offered rocky and jagged gardens of small boulders

This is an amazing time of year in the desert because the flashes of color are popping up everywhere. 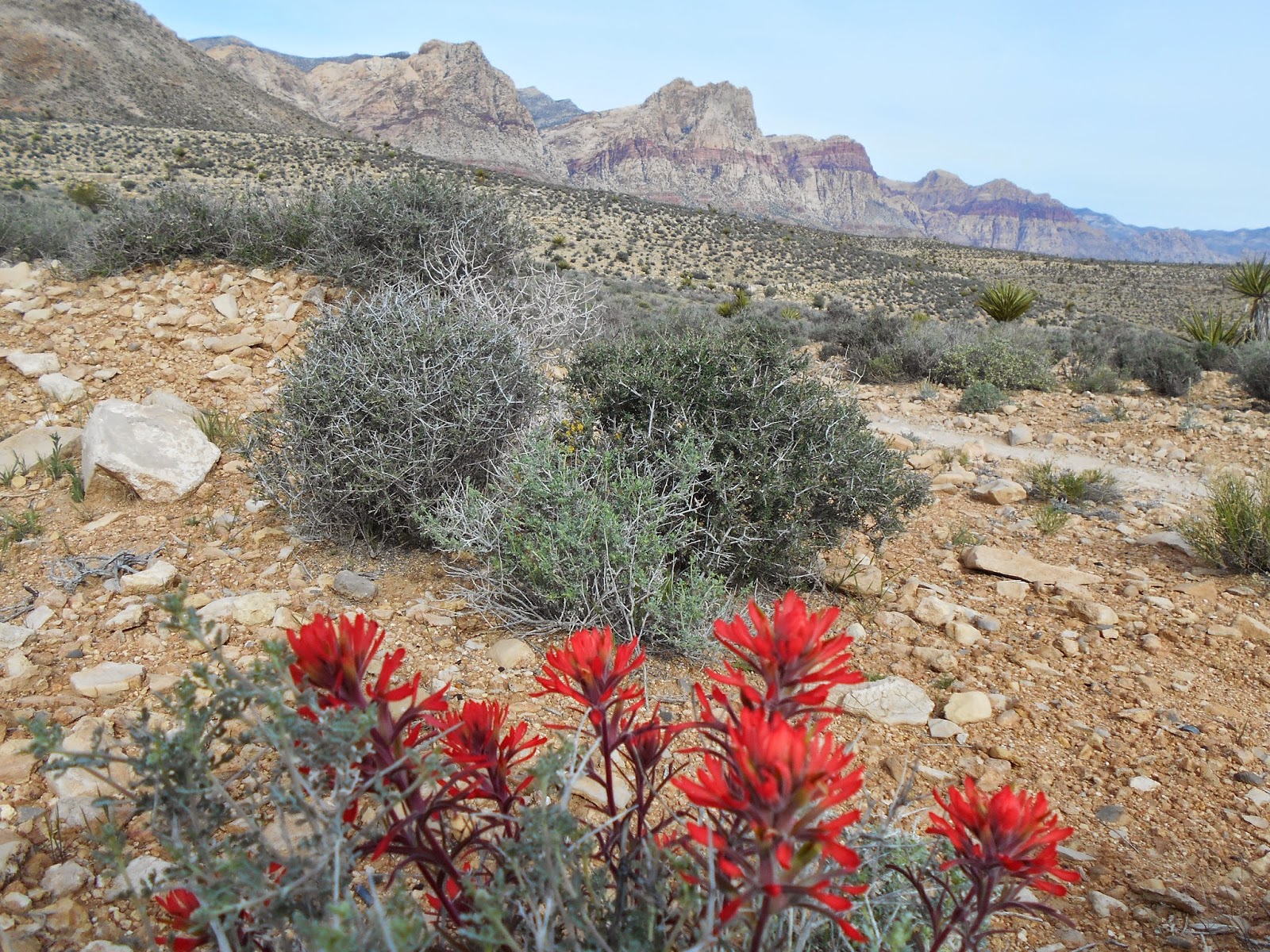 The Pugsley is an amazing bicycle. I biked from my apartment to Blue Diamond with my bike pal Scott, riding the 14 miles on pavement and pushing the single-speed fattie at a nice clip. Scott was nice enough to bike a little slower, so we yapped away on the State Road 159 shoulder to Blue Diamond.

Then, it was off to the trails as Scott pedaled back to Summerlin. 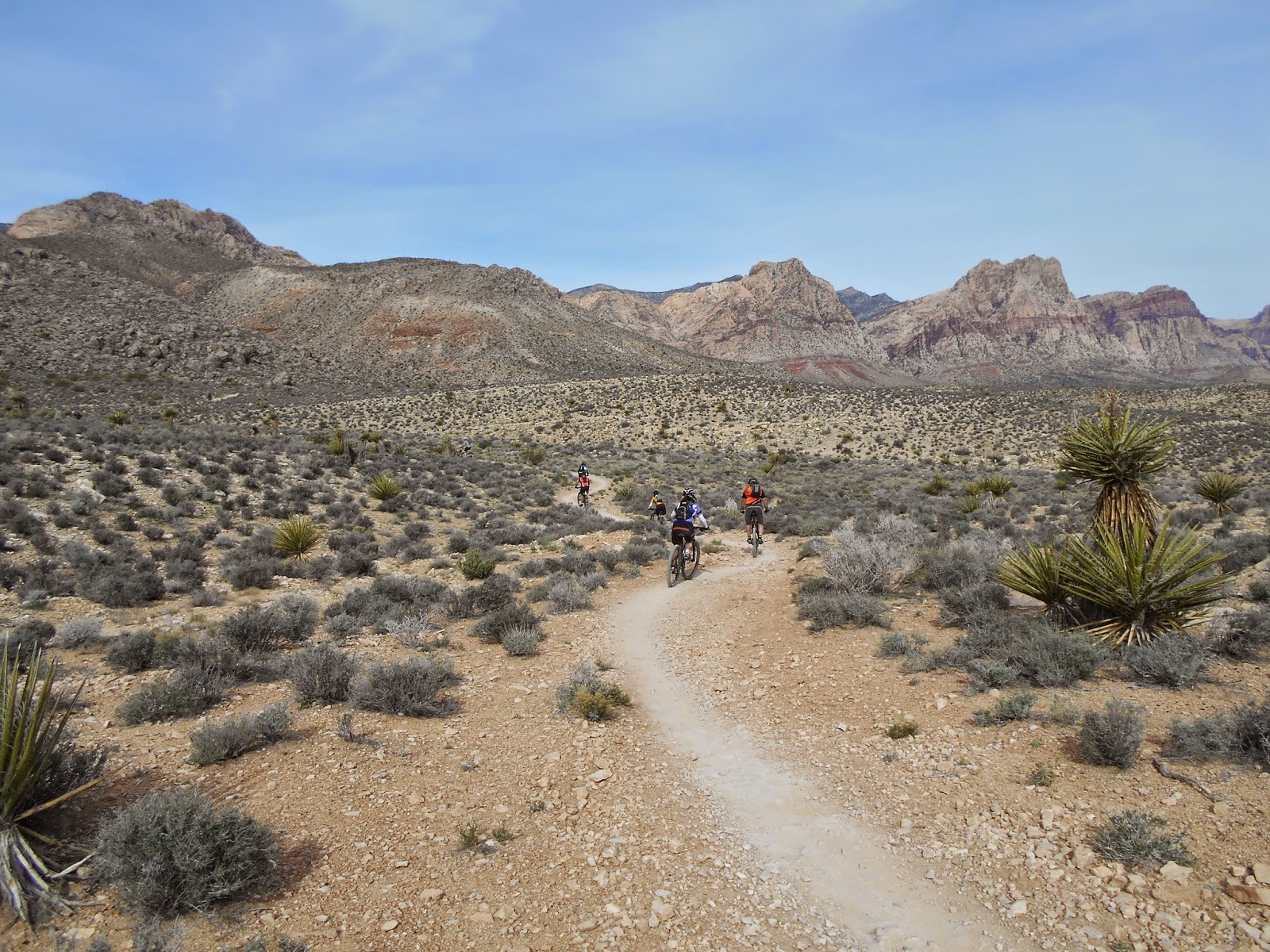 The Pugsley's overs-sized tires make it feel as if you're floating above the ground, as close to flying as you can get.

We followed the trails on a loop that circled around a ridge on Blue Diamond's north side, and we headed back to Blue Diamond we followed a super camel-humped section of ups and downs, before dive-bombing toward 159 and another sandy trail back to the park.

Great ride and great scenery with a fine bunch of bikers who shared a love for enjoying the outdoors of Las Vegas that you never see in the movies or the TV commercials hyping Vegas. 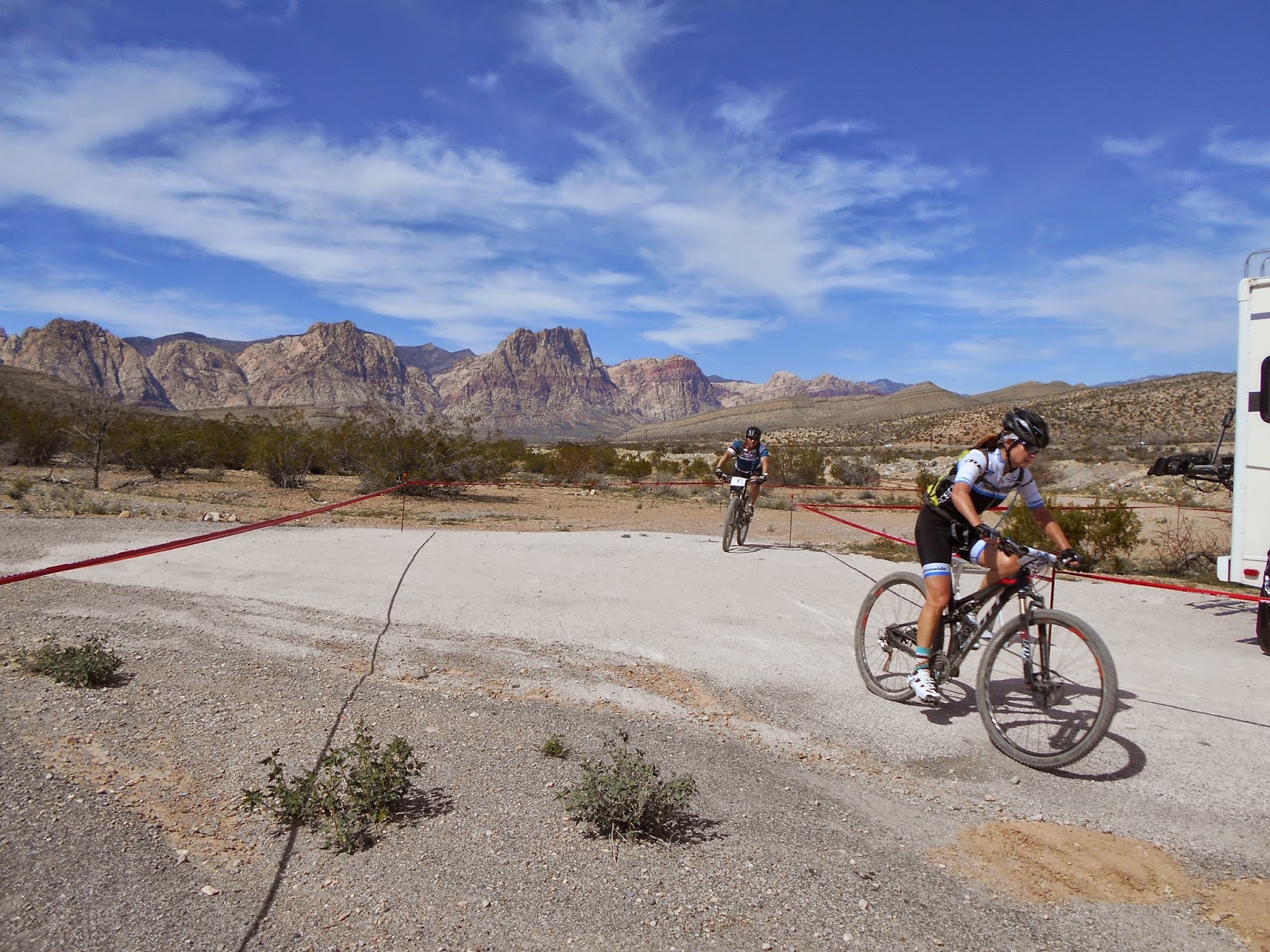 Las Vegas Cyclery and Escape Adventures were back at it Saturday, throwing an amazing inaugural mountain bike race event called the Red Rock Fat Tire Festival in Blue Diamond. Here's a Review-Journal story on the event.

About 140 racers pedaled the 25K, 50K and 100K races in Cottonwood Valley outside Blue Diamond on a picture-perfect March day in southern Nevada.

"We have world-class riding," said David Jaget, 46, of Summerlin, a chiropractor who is a member of the Southern Nevada Mountain Bike Association. 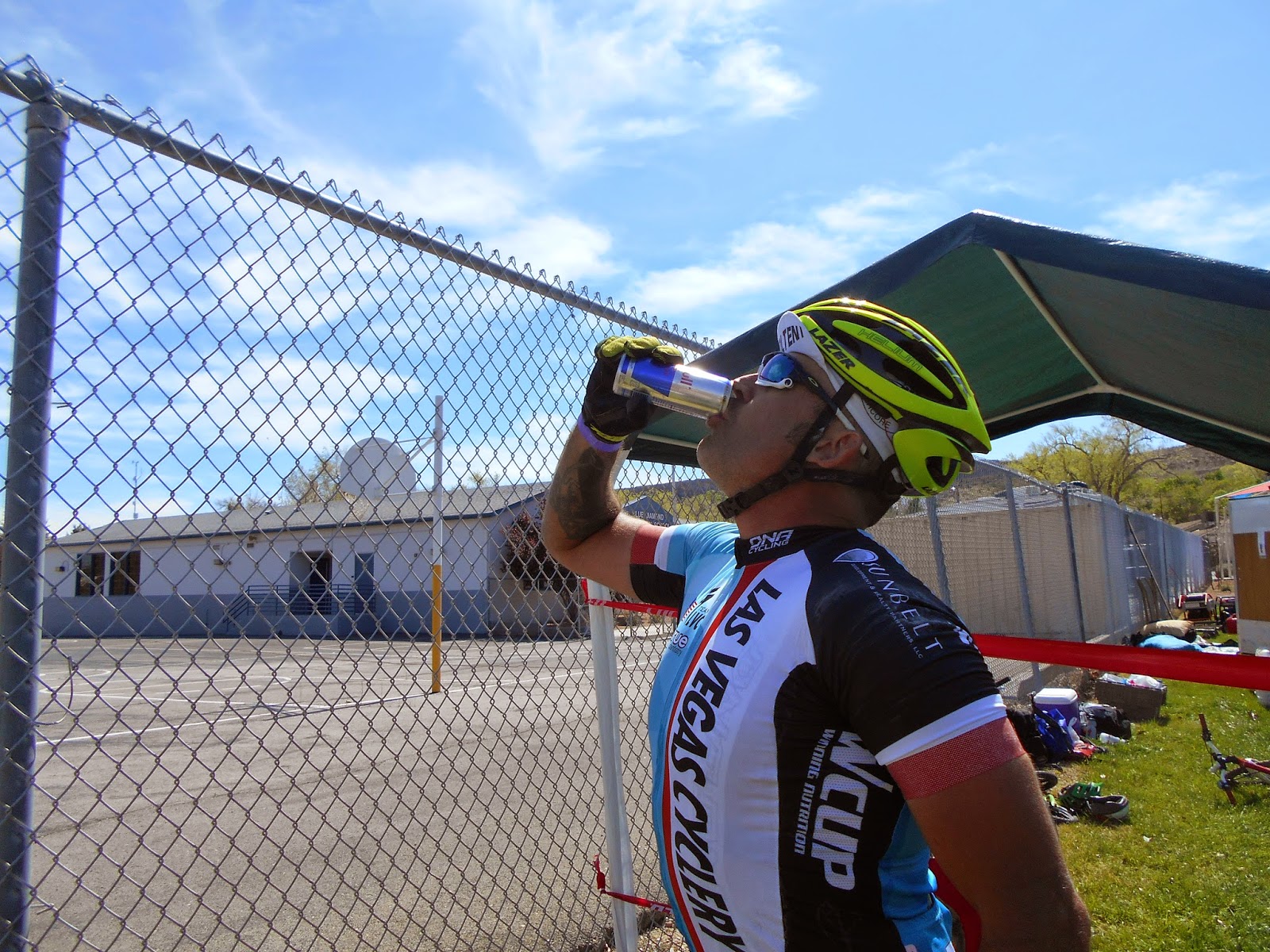 Here's Mark Duncan gulping a Red Bull energy drink before he headed out for the final loop of his 100K race, which required four laps.

"I travel, climb and bike the entire world and this is still my favorite place to enjoy the outdoors," said Merrick Golz, an Escape Adventures tour guide who spent $2,500 on food supplies for the weekend mountain bike event.

Jared and Heather Fisher own Las Vegas Cyclery and Escape Adventures, and as usual they threw a great event. 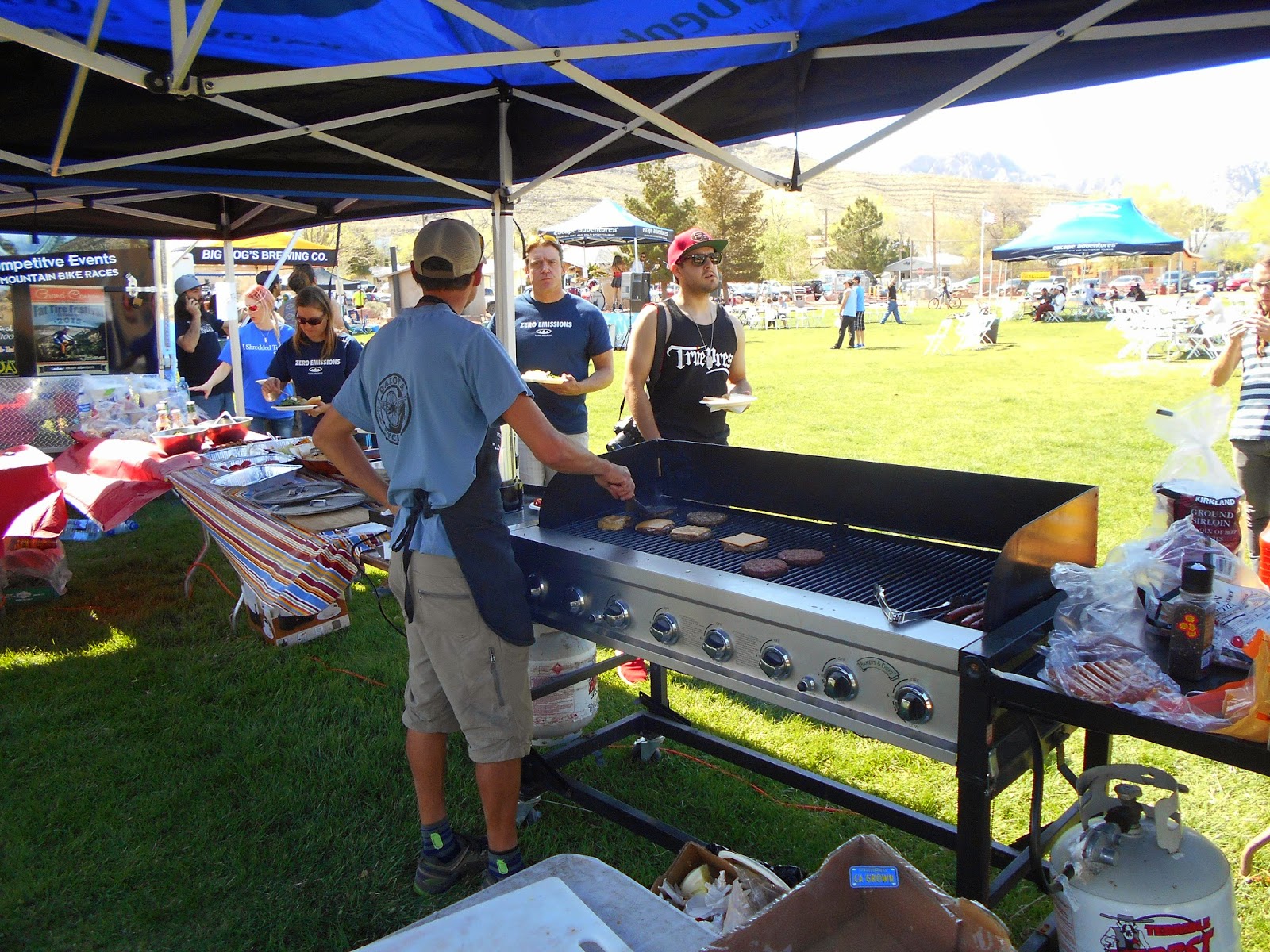 ""It shows a side of Las Vegas you don't see," Heather Fisher said of the Red Rock Canyon setting. 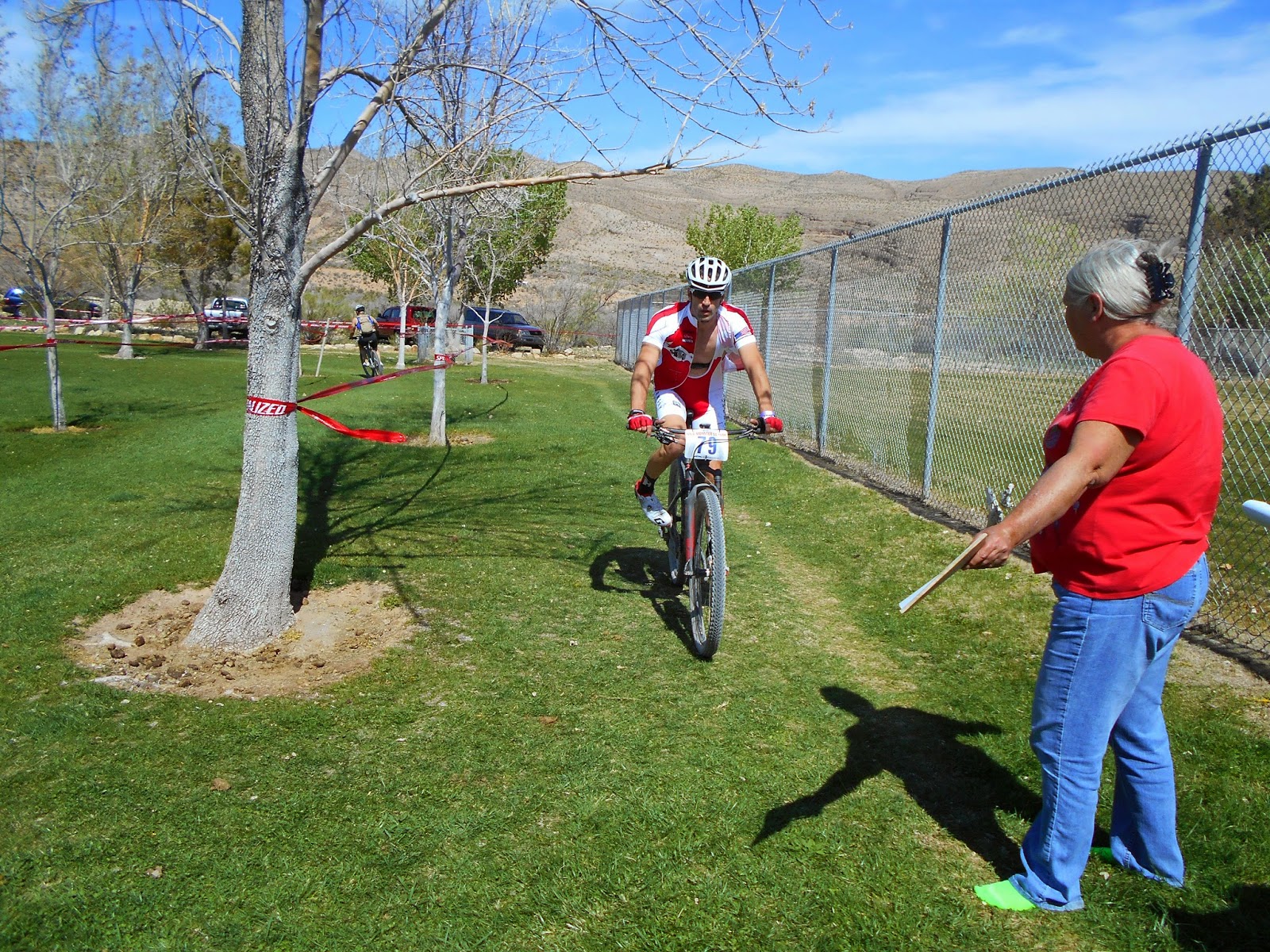 The Desert Furnace Is Ready For Ignition

After a winter slumber, it's time to stoke Bicycle Stories into blog-posting form.

It's kind of like the weather here in metro Las Vegas, where, if you put your nose to the air, can feel the summer desert heat maker slowly cranking back up.

I smell the change seasons when I ride my bicycle, and it's most evident when the splashes of color of washing over the high sloping desert. 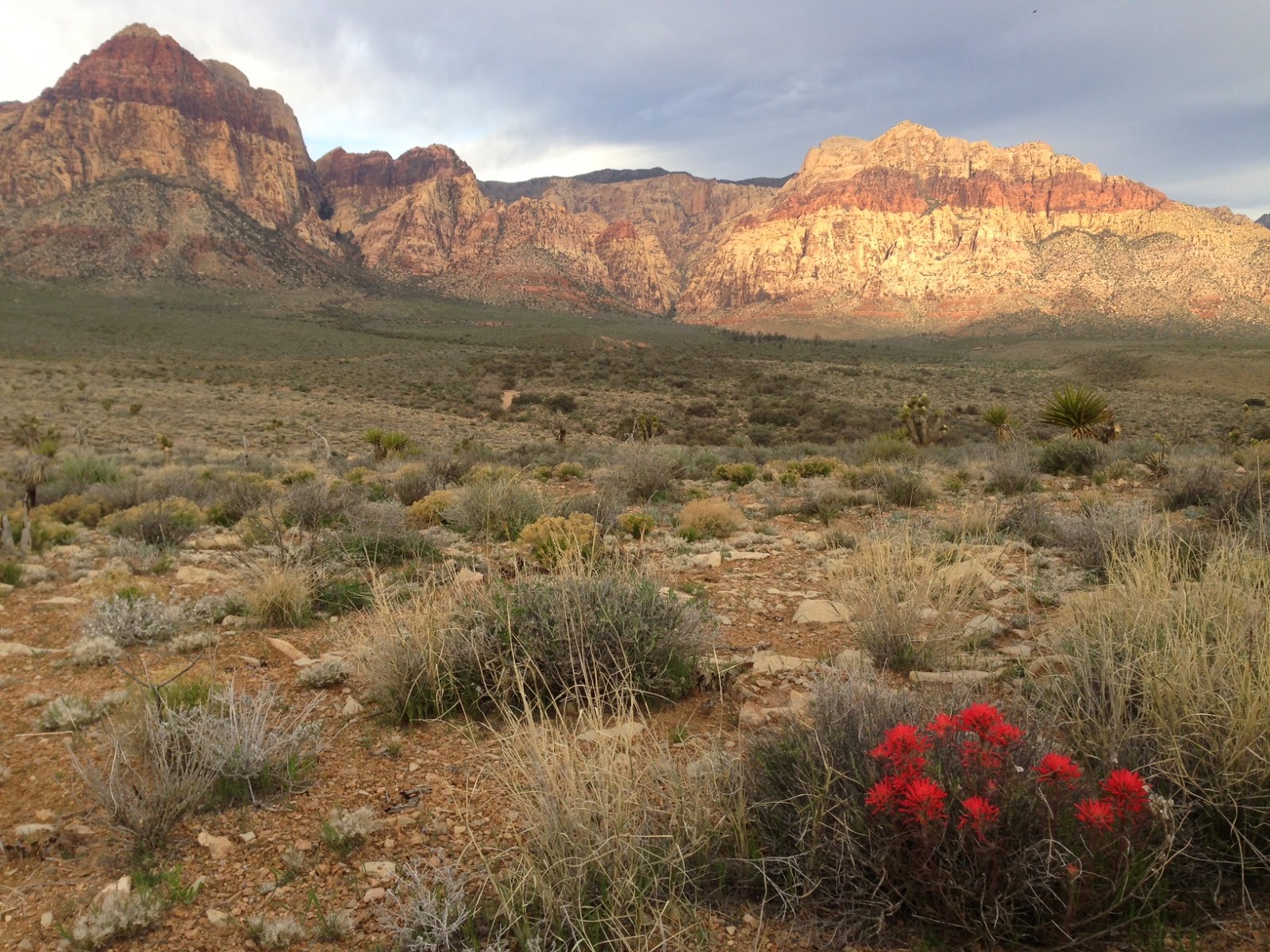 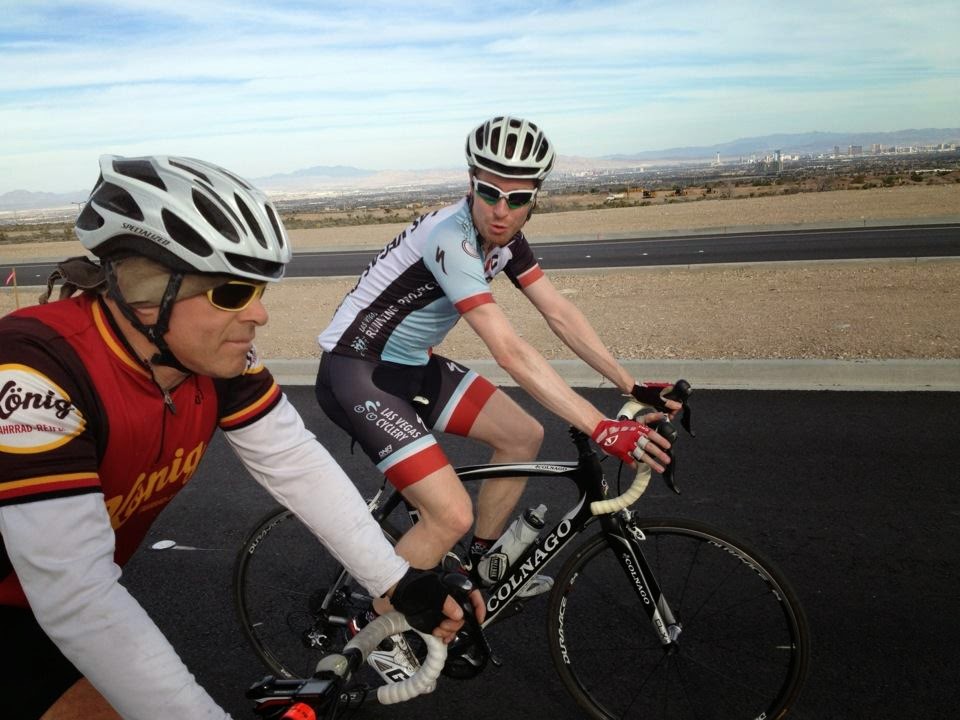 Good luck to Mark McCann, who heads off to Phoenix with his lovely wife Karen. 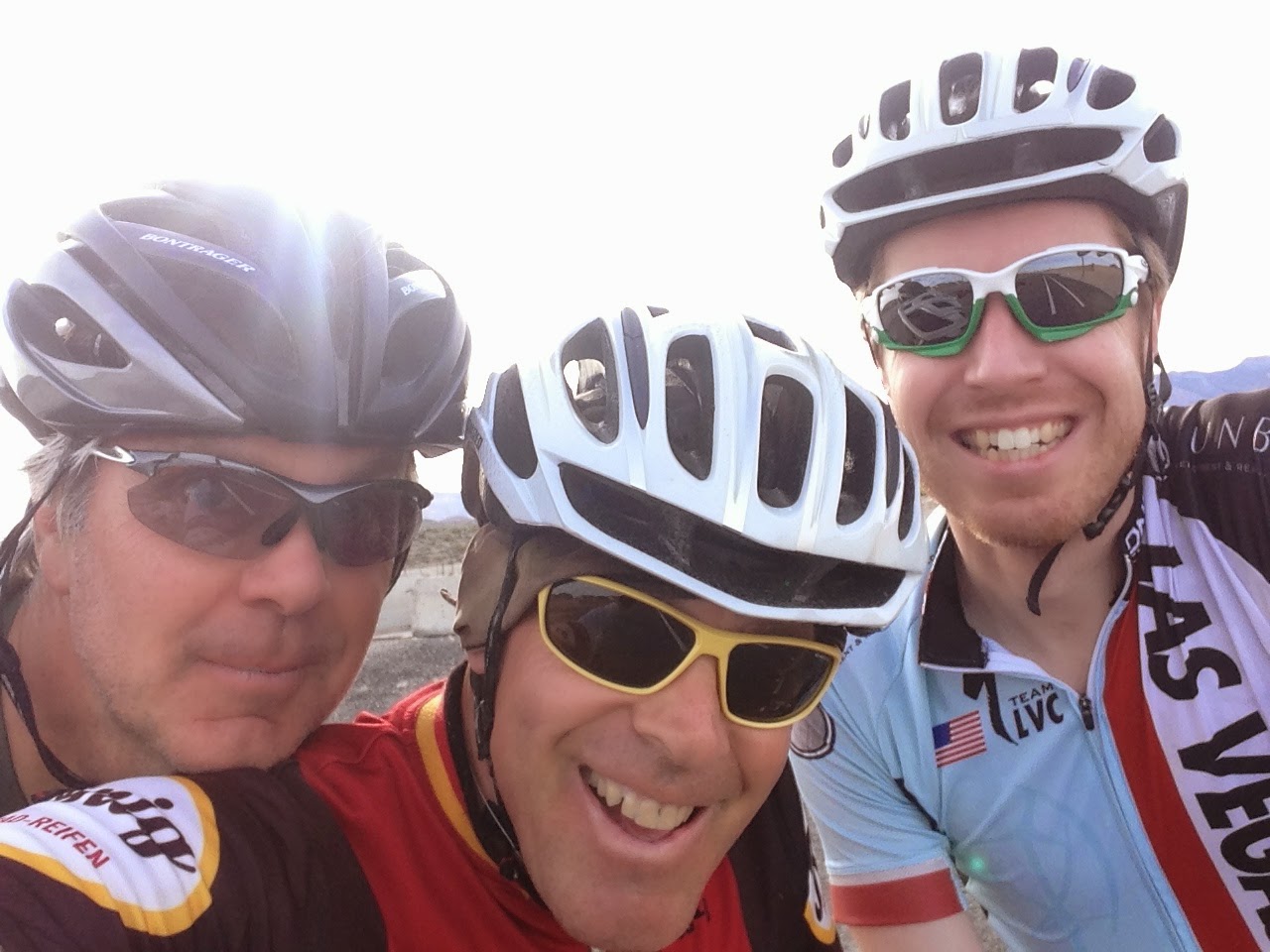 Bicycling From The Edge Of Town


Reporting and writing stories is kind of like mining -- you can chip away for hours and not find a gem and at the end of the day you're left with some flakes and glitter but no big diamond.

I left the news mines rather empty-handed, but then a different kind of rush ensued.

I hopped aboard my road bike for a pedal-powered commute home, gaining 1,141 feet in elevation and joyfully catching a tailwind up the 10 miles along Alta Drive that's the meaty part of my ride home of 12 miles and change.

The wonderful thing about pedaling home is that while motorists curse each other and swap the middle finger salute, bicyclists are automatically buds by virtue of knowing what it's like to be a bicycler in a country dominated by a motorized vehicle-centric culture and infrastracture.

About two miles into the ride, I met up with this fella and we easily traded greetings and smiles. 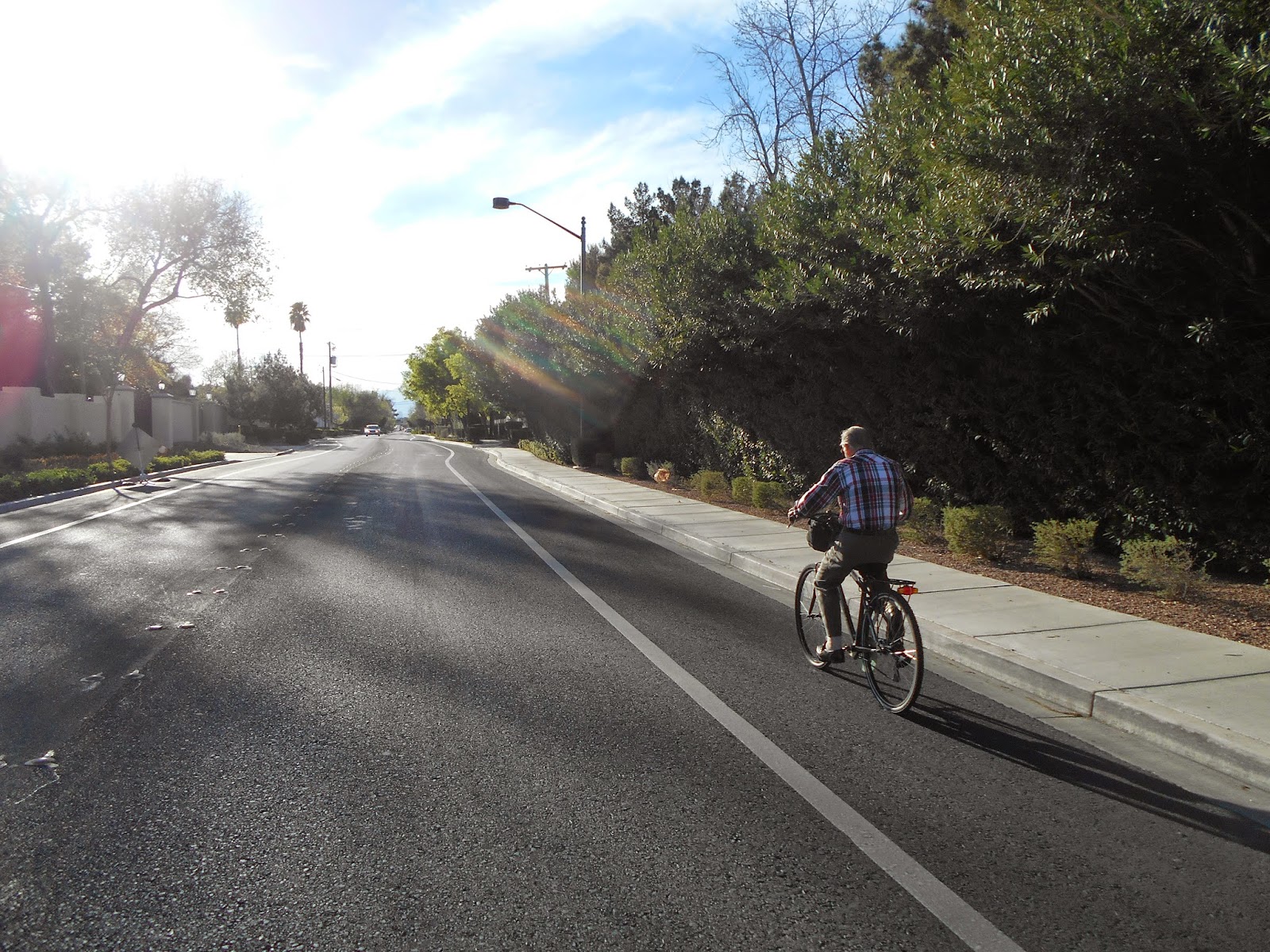 Then, a mile up the road this fella came roaring past me. This young buck works at Zappos and was also cycling west on Alta Drive, all up hill.

How did I know he was a Zapponian -- check out the main sponsor on his kit. 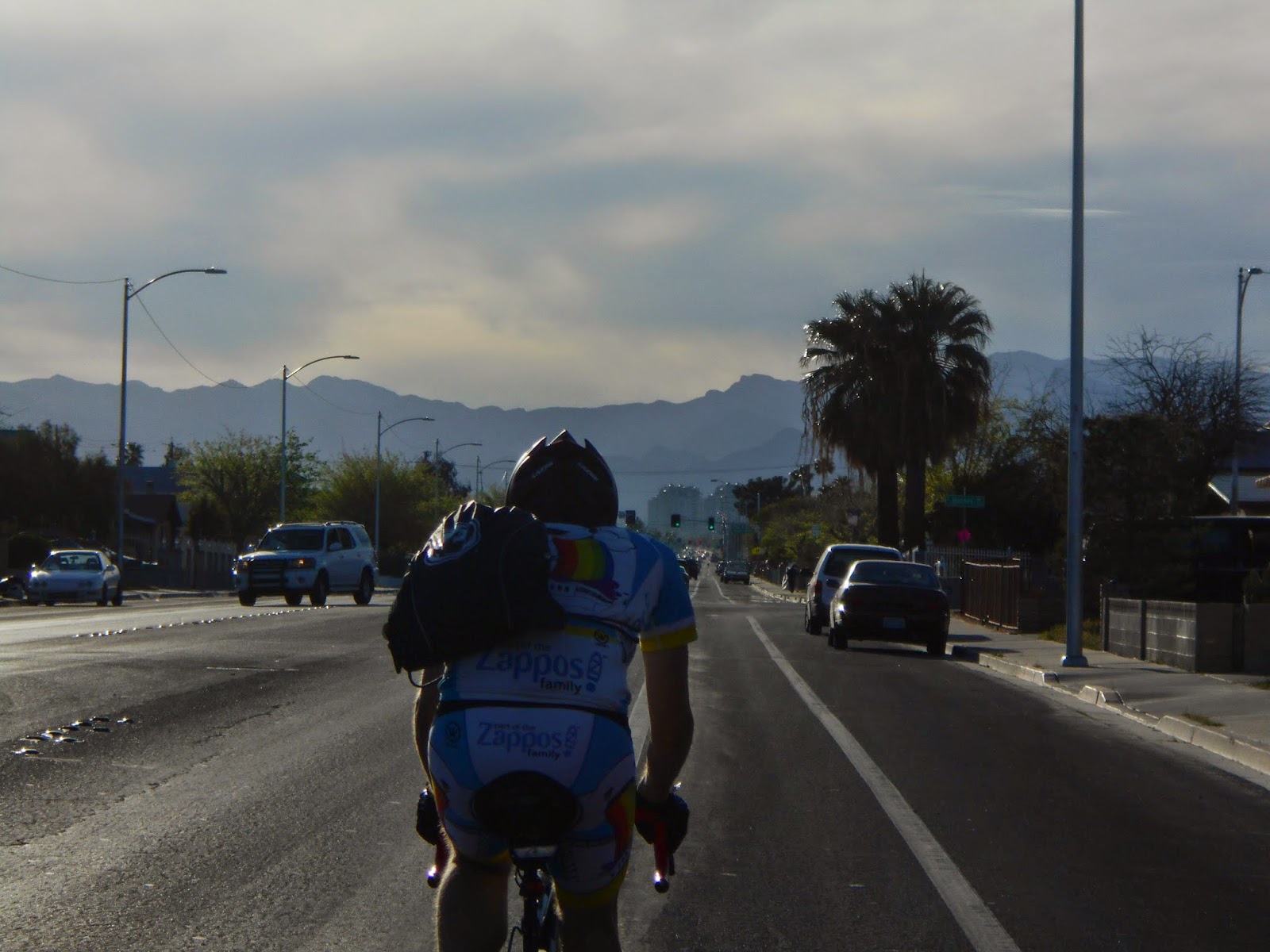 My handlebar gadget said it was 89 degrees when I left the edge of downtown.

But amazingly enough, thanks to a dipping sun and a rise in elevation, the temperature fell to 75 degrees. 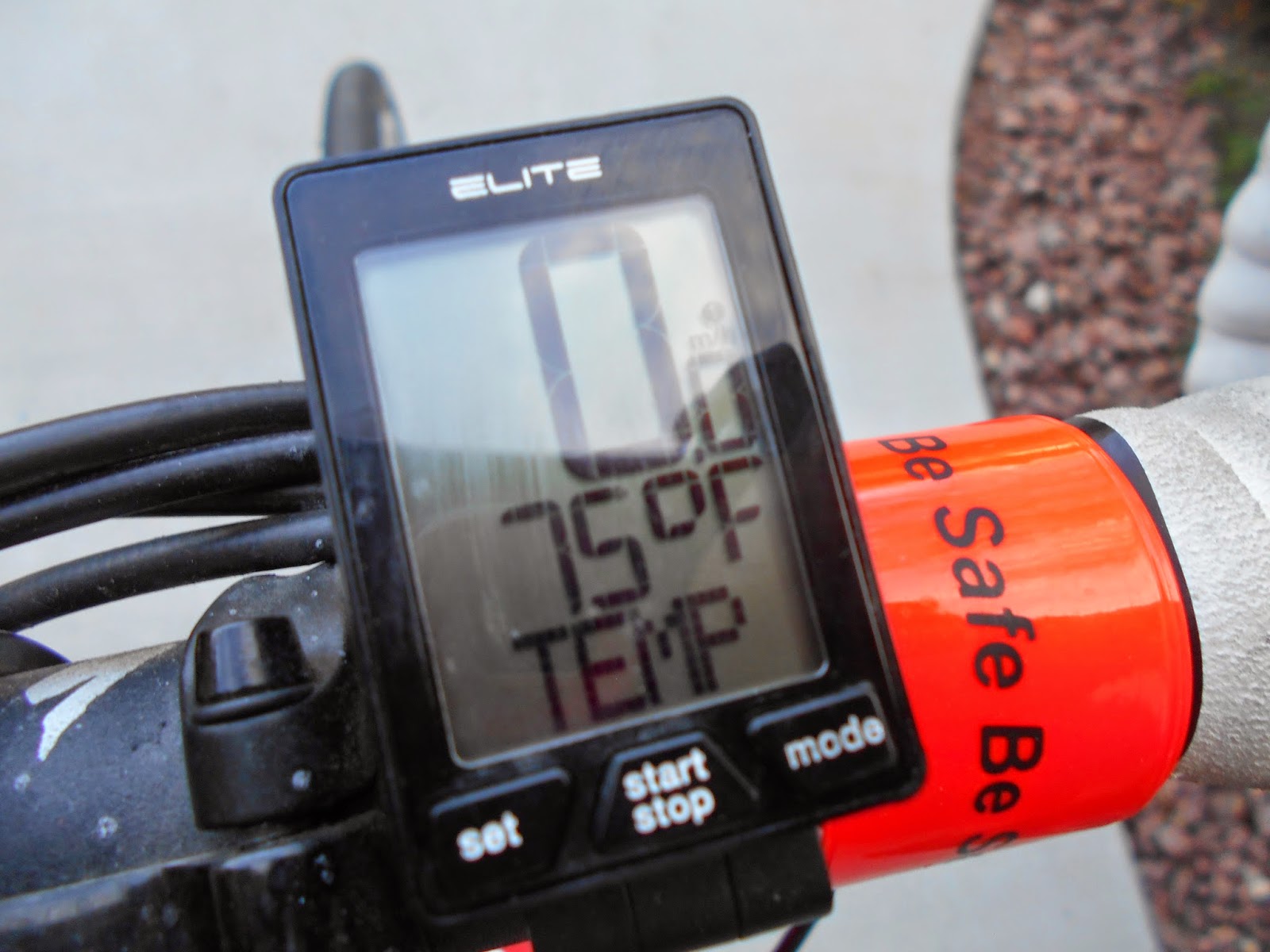 That's what bicycling will do for you -- take you from one world and plop right into another one.
Posted by Alan at 6:47 PM No comments: