Happy Father's Day and the Story of the Red Rock Notch 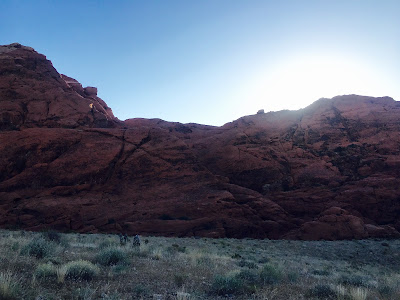 This morning on Father's Day the entrance to the Red Rock Scenic Drive was open at 6 a.m. -- not the 8 a.m. start time when the Bureau of Land Management reopened the scenic drive to motorized traffic a few weeks ago.

It was 6:10 a.m. when I was bicycling by the Red Rock entrance off State Route 159. I peered toward the red rock ridge, which has a notch in the middle. I love that notch, which allows beams of lights to shoot through the ridge at daybreak.

Funny, Red Rock has nothing to do with a summer job I worked to afford college. But whenever I see that "notch" in the ridge, I think of the "notch" in the garment patterns I worked on at the Liz Claiborne plant, where I worked with my dad.

I worked with my father for 3 1/2 summers though high school and college, driving the hour back and forth with him from suburban New York to north New Jersey. The Claiborne production plant was not too far from the Giants football stadium in the Joisey swamps.

My dad was a worker bee. Man, he worked in the garment business for many years working long hours every day. I witnessed it.

Julius Cznel survived the Holocaust as a little kid fleeing with his family to Siberia, lived in displaced person camps following World War II and came to the USA at age 14 when he began learning the garment business in school. His last name was changed to Snel when he arrived in the United States. 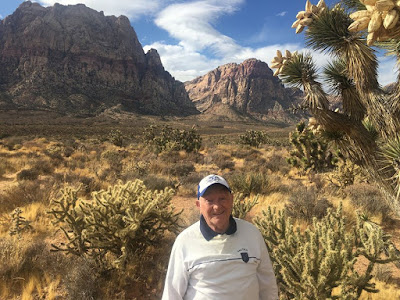 When Liz Claiborne created her brand and line of women's clothing, Julius Snel was the second person hired in the production house.

He raised three kids outside New York City. And my dad and I bonded well at minor league ballgames in Florida. 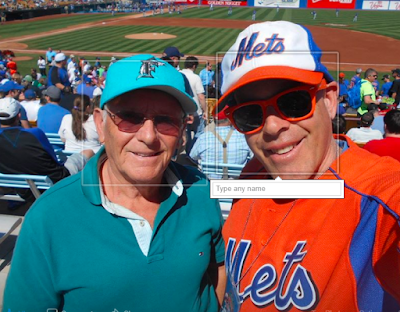 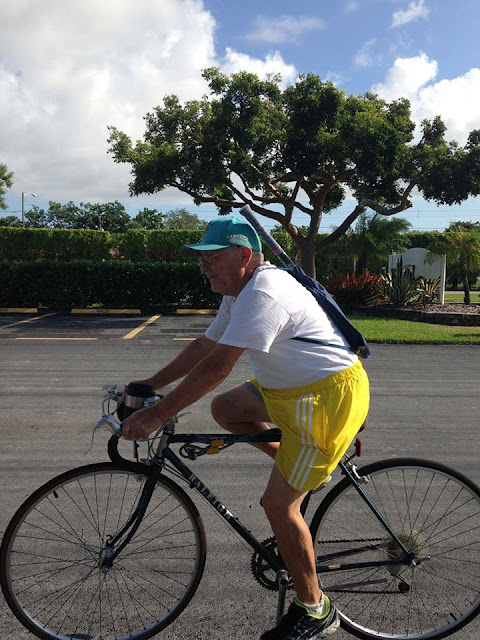 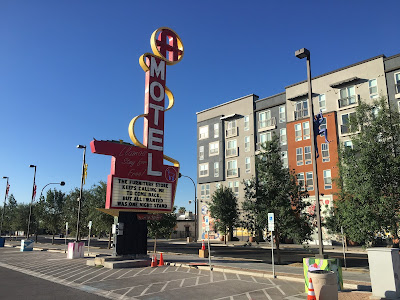 This morning, I bicycled to downtown before heading over to Raiders stadium and then back home in Summerlin.

I thought I would photograph the Fremont Street and 9th Avenue intersection at each corner because the artwork is so impressive. 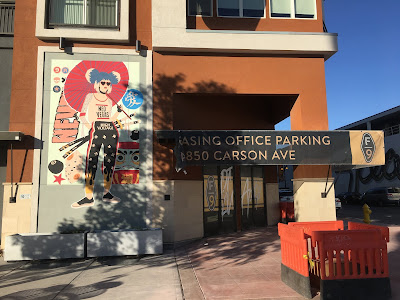 The corner reminded me of my days of covering downtown Las Vegas for the Review-Journal from 2012-16. 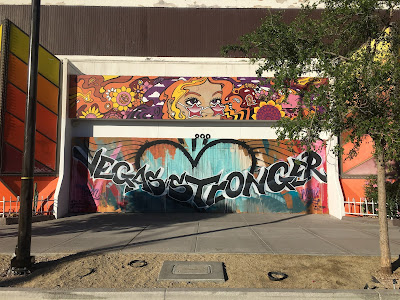 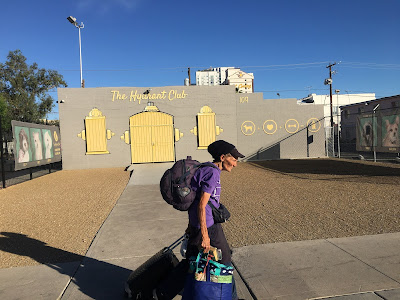 *
Also, don't forget, the new book Bicycle Man is out there and available to be purchased. 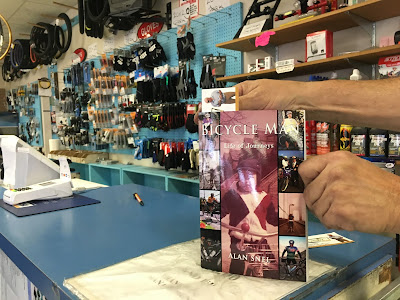 Retail bicycle stores are busy with bike repairs these days and that was true over at
Bike World, one of the older bike shops in the Las Vegas.

I chatted with Frank, a friendly Bike World worker who bought my new book Bicycle Man for $10 and said he would leave it on the counter to see if people would be interested in reading or buying it.

Bike World at 1901 S. Rainbow Blvd is a throwback bicycle store and Frank told a customer that it would take two weeks before a repair could be made.

More people are bicycling and taking old bikes out of their garages to ride only to see the bikes could use a repair. That's why so many bike shops are busy doing repairs.

Selling books is no easy task. Thank you Summerlin Giant Store for taking a few books to sell and I'm hoping Jared at Las Vegas Cyclery agrees to sell the books at his shop. 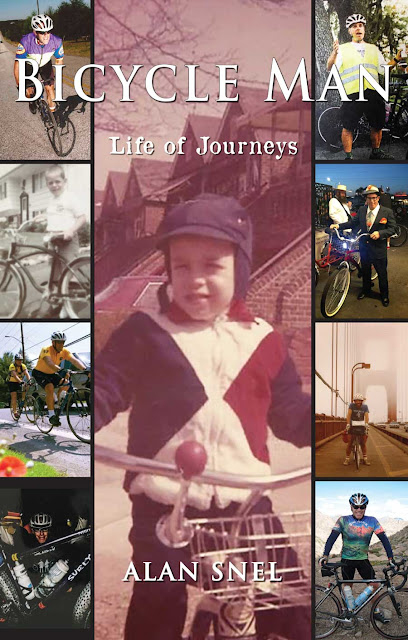 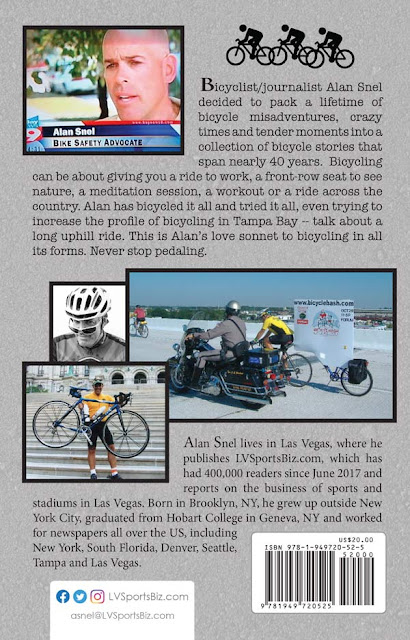 Chris Maathuis at Channel 8 did this incredible report on the book, which is a compilation of 37 years worth of bicycle travel stories, adventures and essays. Take a look: 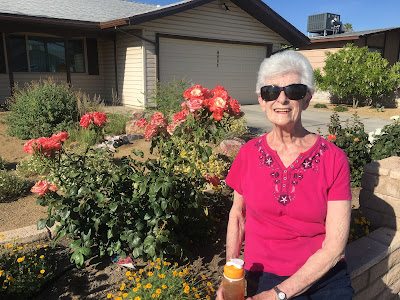 When I bicycled back and forth on Alta Drive from Summerlin to downtown Las Vegas and back all the time, I always stopped at a house that had roses along a low brick wall lining its front lawn.

I remember chatting with a gentleman by the name of Harry, who happened to be a bicyclist, too, of all things.

Well, just yesterday morning, I bicycled down the big hill of Alta to downtown and stopped to chat with this lady at the house.

I told her I was a bicyclist who long admired the roses lining their front lawn.

And I asked about Harry.

Well, this is Marianne, and she informed me that Harry died a few months ago.

It was sad to hear, but I did tell Marianne that I always enjoyed seeing their blooming rose bushes along Alta Drive, just west of the Rainbow intersection.

Marianne told me she was a retired mathematics teacher who know volunteered at the Assistance League of Las Vegas.

I told her I knew her husband from stopping to chat with him during my Alta Drive bicycle excursions.

It's the beauty of the bicycle -- fantastic human-powered, engine-free transportation with the chance to connect to people on the street.

It's also why I can't bike in groups. I stop to chat with people when I pedal all the time.

And these bicycle adventures are all in my new book, Bicycle Man: Life of Journeys.


Buy a book by emailing me at asnel@LVSportsBiz.com