Peddling Bicycling At The Capitol 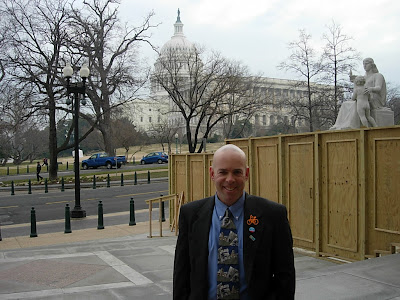 WASHINGTON,D.C. -- It all began 10 years ago with 20 guys in Spandex walking the Congressional House buildings of Rayborn, Longworth and Cannon to lobby for bikes.

Yesterday, it was 800 of us bicycle types wearing suits and ties and carrying packets of pro-bicycle legislation and leaning on our local Congressional members to support HR 4722 The Active Community Transportation Act of 2010 (nicknamed The ACT act), and other laws about complete streets, safe routes to schools and urban revitalization/livable communities.

I pitched aides for Tampa Bay-area congressional members Kathy Castor and Bill Young. Castor, a Democrat, is already a co-sponsor of one of the bills. But we need Young, a Republican, to co-sponsor HR 4722. SWFBUD will hold a special Bill Young bike ride if he sponsors the bill.

The National Bike Summit draws bicycle advocates of all stripes -- bike coalitions, bike shop owners, planners, bike industry folks. Just about anyone who loves bicycling and who believes that our national government needs to including bicycling in our transportation system. Even bike superstars like Gary Fisher, the guy who helped invent the mountain bike, was walking the marble floors of Congress with us to chat up their local congressmen. 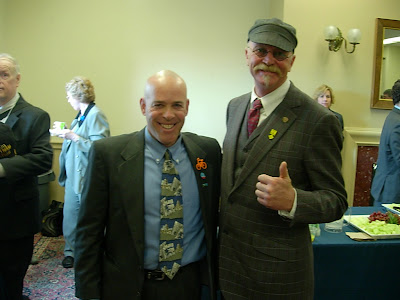 This being the car-centric U.S., not everyone in the congressman's office is so supportive of bicycling. The truth is it's a mixed bag of reactions, with many offering a friendly smile, a sympathetic ear and non-committed words.

For example, one young aide just smiled and nodded her head when Randy Myhre, owner of Oliver's Cycle Sports, spelled out the reasons why her congressman should support the National Bike Summit's slate of legislative bills. (Fun fact -- did you know that there are more proposed bills in Congress than there are cherry blossom trees in Washington, D.C.?). She didn't have much to say and didn't ride a bicycle and didn't laugh at our jokes about Spandex.

Randy and I were paired for most of the day and though Randy was a rookie on the Hill, he was a pro in our meetings. I often did the introductions, and then tagged Randy for effective tag-team presentations.

In our visit to Congresswoman Kosmas's office (she represents a district from Orlando to the Space Coast), we met legislative assistant Paolo Mastrangelo. Randy opned up with, "With a nice Italian name like Paolo, you must be a bicyclist."

Great line! Indeed, Paolo was a bicyclist and said his boss, Kosmas, was a bicyclist -- and we were off and running with our pitch. We're hopeful she will support the pro-bike bills.

Part of our pitch is pointing out that Florida especially needs help because our state is number one in the U.S. in bicyclist fatalities. Florida has more bicyclist deaths than even California, which has twice the population.

That hit Paolo hard. Paolo said he went to college in Sarasota and suffered a great loss when a friend died on a bicycle.

Making connections comes in all way. In Ginny Brown-Waite's office, legislative assistant Kate Troller loved talking bikes with Randy and I because her dad back in Cincinnati was a bicycling fanatic and even her grandparents in Florida rode bikes. We used that connection to lean on Kate to tell her boss to support our bicycle agenda. Here's Randy talking with Kate, who knew all about Bontrager wheels from her dad. 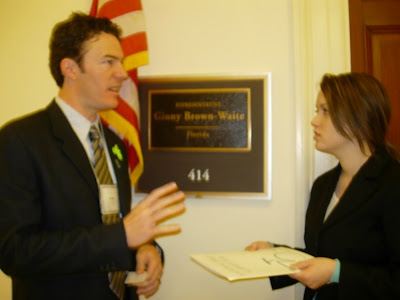 Then, there are our colorful bicycle pins that we wear on our lapels. I wear them when I speak before the Tampa City Council or Hillsborough County Commission, and they're attention-grabbers all around the Capitol. The League of American Bicyclists, which runs the National Bike Summit, gave us a bag of a dozen green, orange and pink pins to hand out to our congressional contacts and people around The Hill.

Three guys from Wisconsin lobbying for the YMCA asked for them I gladly gave them some to wear on their lapels.

It was heartening to see Matt Dickerson, a Young legislative assistant, to pin a green bicycle on his lapel. Hopefully, Young will support and co-sponsor HR 4722. That's Kathryn Moore, executive director of the South Florida Bike Coalition, talking with Matt in our group meeting in Congressman Young's office. 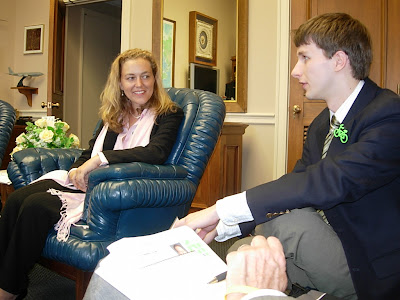 To pump up this legion of 800 bicycle lobbyists from around the U.S., the Godfather of bicycle-loving Congressmen -- Minnesota's Jim Oberstar -- gave a rousing speech while we carboloaded on bagels, fruit and muffins at 8:30 am. It was great to personally meet Jim yesterday. His number one quote: "Let's move from a hydrocarbon economy to the carbohydrate economy!" His power and influence is amazing as the chairman of the House Transportation Committee. 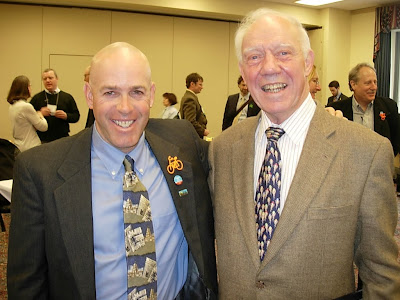 We also heard the words of Oregon Congressman Earl Blumenauer, Oberstar's bicycling wingman who has pieced together a Bike Caucus of more than 150 federal legislators.

Words of encouragement are vital because we bicyclists in Florida need to support each other because we have all seen the "just-don't-get-it" looks on the faces of people who are tethered to their cars and can't understand why people love bicycling.

It's fun to meet great bicycle advocates from around the country. More than 70 came from California, including Rebecca Stievater, outreach organizer for Bicycle-Friendly Berkeley Coalition who showed me her bike link tat. 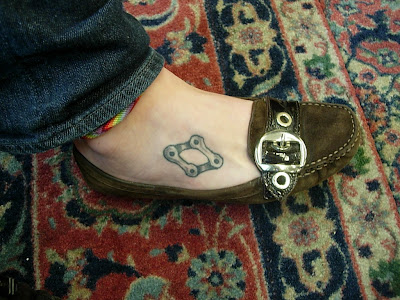 A special highlight of the National Bike Summit was the comradery of my fellow Floridians who attended the Summit, anchored by the hard-working Laura Hallam, executive director of the Florida Bicycle Association who kindly treated me to a margarita at a Mexican restaurant where Team Florida gathered after a day of walking Congress' long, sterile hallways yesterday. That's what I call leadership!

Randy Myhre of SWFBUD store Oliver's was smooth as silk in his talks with congressional aides and proved to be a wonderful meeting mate.

I relished the chance to see my blogging South Florida sidekick John Hopkins, a former Miami Herald copy editor and big-time green man who lovingly told Matt in Young's office to feel free to contact him if the congressman had any questions about the bills we suggested he back.

It was great to re-unite with Miami's hard-charging Gary Mendenhall, customer service manager for J&B Importers who I first met two years at the Summit. Gary is creating some cool bike events in the Miami area to get people on bikes.

Kathryn Moore is the new energetic executive director of the South Florida Bike Coalition and has great background working in the congressional office of a non-voting member from the American Somoa.

Mike Greehan of Lake Worth is a veteran of these Washington, D.C. gatherings and is the former publisher of Bicycling Magazine.

It was also great to share a congressional meeting with Jeffrey Lynne of Akerman Senterfitt attorneys at law who is a board member of the League of American Bicyclists.

And it was good to see Mary Jane Mack, who owns a Miami bike shop and is a Summit veteran who walked Congress with her husband and daughter.

Let's keep the bicycle activism rolling!
Posted by Alan at 4:38 AM

Awesome...I dream of the day I can meet Jim Oberstar in person!

Just wanted to thank you, albeit belatedly, for a great post!