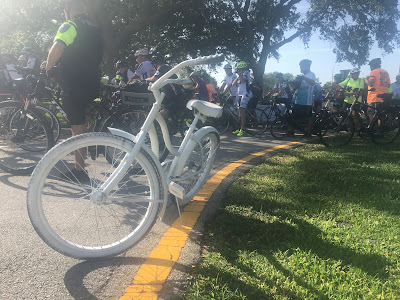 There are several reasons.

Chief among them: your state is a killer state for bicyclists.

Florida has the highest number of bicyclist deaths in the U.S. and you don't care. You have showed no political leadership to try and reduce that number and the fact is you and the political leaders just don't care enough to do anything about keeping bicyclists alive in your state. A former state legislator who is the ex-mayor of Kissimmee, Frank Attkisson, even was killed while riding a bicycle in St. Cloud in early April and the state Legislature was not moved to toughen the penalties for drivers who kill bicyclists.

On March 7, I nearly joined the long list of bicyclists killed by motorists in Florida.

But I survived, and for that I am grateful.

I survived a motorist who smashed into me from behind (he claimed he never saw me) while I pedaled in north St. Lucie County outside Fort Pierce.

And with that memory in mind, I rode a memorial bike ride called the Ride of Silence Saturday in Vero Beach. Many towns around the world held similar bike rides Wednesday to draw attention to and memorialize the lives of bicyclists snuffed out by people who drive motorized vehicles.

Here in Vero Beach, about half way between Orlando and South Florida on the Atlantic coast, I joined 50 other bicyclists to remember those who have lost their lives in Vero Beach and Indian River County. 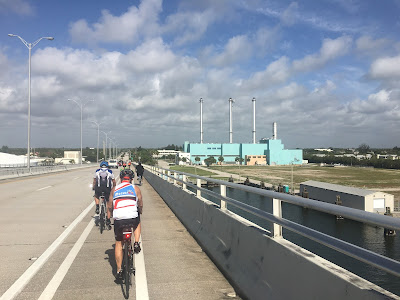 It's an impressive display of sweat equity to lean on local officials to make it safer for bicyclists.

But Rick Scott and his Department of Cars are good at lip service about bicycling but don't deliver the goods.

Florida treats the high number of bicyclist deaths as collateral damage of a modern road society, just business as usual in the sandbar state. 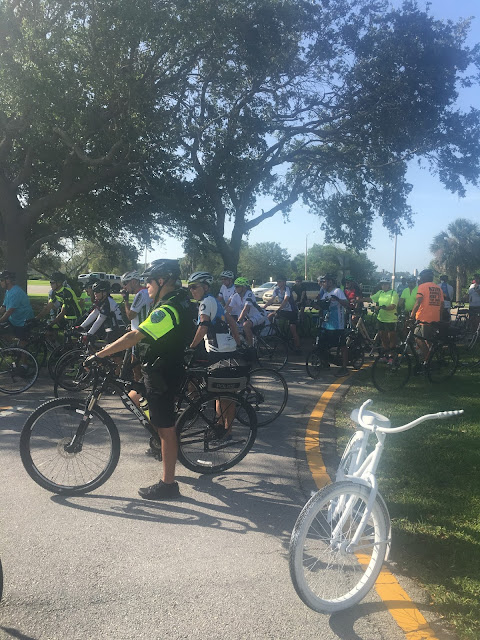 Bye Florida. Happiness is getting out of your state alive.
Posted by Alan at 9:04 AM

You are so lucky to not only be alive but not crippled in body if not bruised in spirit.
Today I joined ~23 other cyclists to bike from the St. Pete offices of Sierra Club to the Hands Across the Sands event on Treasure Island but we only did it because 90% of the trip was on the Pinellas Trail.
I hope you can get back to biking soon if you haven't already.
Take care and CYCLE ON!

Alan, it is so frustrating to see you go, but indeed, thank you for all you've done for us in the cycling community here in Florida, it was a pleasure to know you and I will continue to read and follow you, do enjoy your new life and enjoy your many adventures to come. Take care my friend.

1. The photo you show is of a nice wide 2-lane road with a bike strip. That is not the road you were on. You chose SR 707, according to the earliest posts, the narrowest road in St Lucie Co to go cycling on. This road has NO shoulders and is barely wide enough for two opposing cars. If you wanted to ride that route, use A1A.
2. I am Dutch born and raised and YES the bike accidents here are (almost) inexcusable. The cyclists here should be jailed. They follow no rules, have no lights, and behave suicidally. I am petrified they end up as MY hood ornament and I will loose MY Driver's license.
3. People are saying of all these refugees in other countries, who fear death, that they should stay home and help change their government. Well, you are deserting Florida because you fear death. People tell me you are a great bicycling advocate. Not if you leave. Educate your government AND do something about teaching these BIKERS here some rules so they don't end up on the Darwin List.

We slow down for bicyclists. On Davis Islands by the dog park and beach, some will dart out in front of you, then get mad at you because you're there, even when you're the one being careful not them. You have to place tough laws on BOTH....sadly BOTH lack caring and paying attention. Like everything, there's good and bad. I think everyone needs a camera in their car and on their bike and no use of a cell phone while driving too....

Interesting information and education once ! thank for good post and sharing......