He Bikes Quietly And Lets His Actions Speak Loudly For Bicycling

Most bicyclists talk about making bicycling more popular and getting people on bikes.

You first see Jose from about a quarter-mile away, wearing his trademark green reflective vest both night and day. Once he pulls up on his bicycle, you see a stocky man in long pants no matter how hot the weather. A light is secured atop his helmet.

And his bike is a humble hybrid-style vehicle with red blinkers attached on the back.

Jose volunteers for all bike advocacy events to spread the good word about bicycling and pedals in just about every advocacy bike ride.

Jose is full of bike ideas and his latest was having a bike ride on the Fourth of July, calling it the "Independence From Oil" Bike Ride. He carefully plotted two bike routes -- one about 11 miles down Bayshore to Ballast Point and another 24 miles across the Gandy Bridge and back. Both rides start and end at the Curtis Hixon Waterfront Park. The rides start 8 AM Sunday.

Jose also wrote up his own press release for the ride and spread the word.

Jose also got help. Doreen of the Seminole Heights Bicycle Club got her graphics designer to produce a great flier.

And other people spread the word about the Ride on blogs and web sites and Facebook.

And Linda Saul-Sena -- in one of her last acts as city councilwoman -- got a city council commendation for Independence From Oil Day. I picked up the plaque at city hall and presented it to Jose this morning after the Seminole Heights Bicycle Club short ride.

Jose is a great example for all bicyclists. 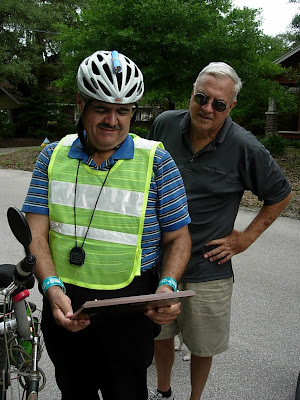 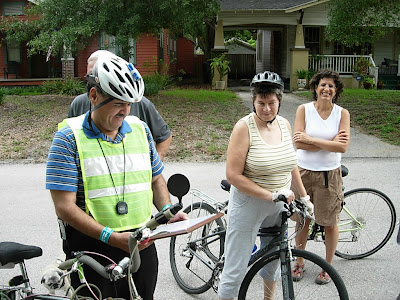 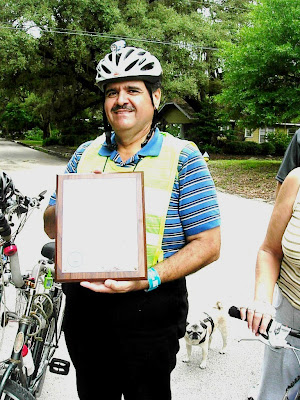 here,here...Jose' is a true"cyclist" in every sense of the word...glad he got recognized for his passion for the two wheels!