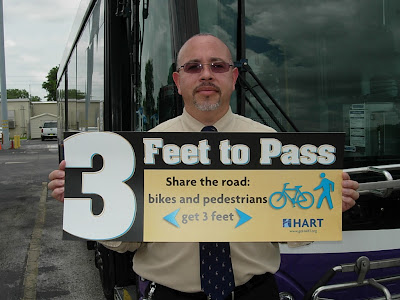 After a HART bus nearly struck me in January and clearly violated the law requiring that motorists pass bicyclists by a minimum space of at least three feet, SWFBUD went into action. I attended several HART board meetings and instructed the HART officials to start a public campaign educating the public about the three-foot buffer law.

After I worked with HART's Katharine Eagan during the past few months, they came up with this sign that's appearing in buses. This is Luis Rivera, HART's operations superintendent, holding the sign today.

This is a good example of taking a negative bicycle incident and turning it into a positive educational experience created by SWFBUD to hopefully educate the public about giving at least three feet when passing bicyclists in a car.
Posted by Alan at 3:34 PM