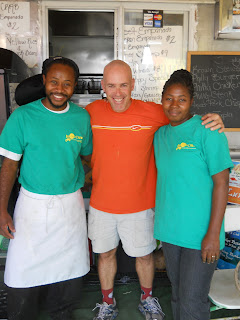 I just had to do this before I left Tampa -- bike along 40th Street north of Hanna Avenue and drop in for a bite at some of the restaurants I whiz by in the mornings during my daily 41-mile ride to Flatwoods and back. Up first was the wonderful Island Crew restaurant, which is a trailer with a small eating area in front near the Hillsborough River. Every morning I yell, "Ya man," as I bike by the Jamaican restaurant. The chicken, yellow rice and black beans were wonderful. The tender, moist chicken fell off the bones and the mango ices were so tasty. Here's owner Poppy and wife Denise with me at Island Crew.

Then it was a stop a mile up 40th Street at Big Steve's Georgia Boy BBQ for some ribs doused in the most delicious BBQ sauce I have ever tasted. This syrupy sauce had one helluva tangy and sweet taste with a chipotle pepper after kick. The ribs kicked ass and I sponged up the sauce with a white bread. 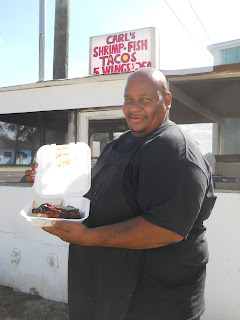 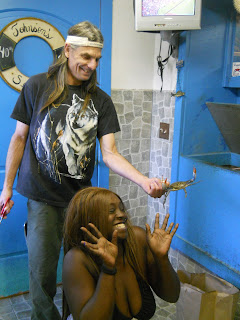 Then the final stop was at Johnson's 40th Street Seafood House. The original restaurant was altered because of the 40th Street road project, but you can still grab a few crabs and dine on a fish sandwich. The talapia sandwich was fantastic coated with a thin and tasty fried layer that enhanced the fish taste.
Posted by Alan at 11:49 AM