Back To The Future In Las Vegas

I'll be returning to Las Vegas in May to start work on two very different but satisfying projects.

First, I'll be working on Jared Fisher's campaign for governor because Jared and his wife, Heather, are committed to improving and spotlighting Nevada's education, economy and environment. Jared is a Nevada original, launching his successful Escape Adventures bike tour business with Heather 25 years ago. He also opened what I consider is America's most environmentally green bicycle store in Summerlin in Las Vegas in 2012,  In fact, here's Jared's bike shop in Dec, 2012.

To offer you a glimpse into Jared's run for governor, see his video.

Jared will be connecting with Nevada's people on a bike ride around the state called, "The Listening Tour," starting Sunday May 1 from his home in Blue Diamond outside Las Vegas. I'm still recovering from a distracted driver who smashed his car into me from behind in the Fort Pierce area March 7. So, I won't be biking with Jared at the start. But I hope my progress is far enough so that I can join Jared toward the end of his bike ride around Nevada when he gets closer to the Las Vegas and southern Nevada.

Jared is unique and conventional politics are changing. He's no idealogue and the only mud slinging you will see with Jared is the mud that flies from under his mountain bike tires. You probably already know Jared's wife, Heather, because she is the public face of the Save Red Rock movement that is opposing a developer's plan to build thousands of homes in Red Rock Canyon.

Jared will stress growing Nevada's economy by attracting entrepreneurs, highlighting the state's amazing environmental natural resources and stressing education as a key driver to the state's health and growth. I know Jared and I'm on board to lend my writing, PR and riding skills to get Jared and Heather to Carson City next year.

Here's Jared and I biking in Red Rock Canyon. 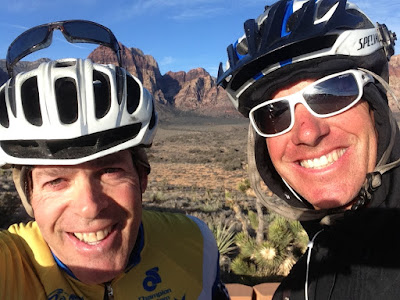 Second, I'll be tapping my sports-business reporting background to launch a new Las Vegas-based website that will cover the growing and dynamic sports-business scene and be called, LVSportsBiz.com. This is a dynamic period in Las Vegas, with a $2 billion domed football stadium being built for the Oakland Raiders, an NFL team moving to Las Vegas from Califiornia. A new NHL team, the Vegas Golden Knights, is starting its inaugural season later this year at an arena on the Strip that I reported about for several years. 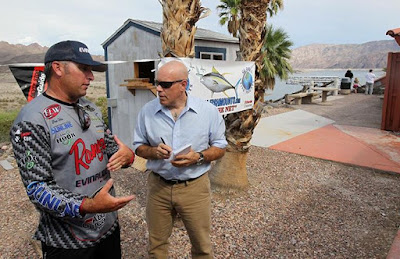 My website will be the authoritative source for sports-business news in Las Vegas and I hope to launch LVSportsBiz.com after I return to Las Vegas in May.

I have covered the business side of sports and stadiums for the South Florida (Fort Lauderdale) Sun-Sentinel, Tampa Tribune and Las Vegas Review-Journal and launched a sports-business website called FoxSportsBiz for FoxSports.com in 2000. I also covered stadium issues while covering city hall beats in Denver and Seattle.

From 2012-16, I covered the sports-biz beat for the RJ, cultivating a comprehensive source network with Las Vegas Events, UFC, the Speedway, AEG, MGM Resorts International, NFR and I was the first reporter to profile Golden Knights owner Bill Foley. I also reported on the Raiders stadium subsidy deal.

I am tying up loose ends in Vero Beach, Fla and hope to return to Las Vegas in early to mid May.

Writing and riding, you're the bomb at both! I am so excited that you are moving back. We'll have to do our midnight century again when you can. But seriously Alan, next time, hopefully we don't have to go quite to this extent to get you to move back to Nevada!