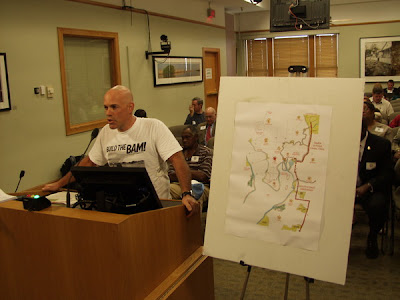 Democrats and Republicans don't agree on much these days but when it comes to local, back yard issues, SWFBUD has been able to unite Democratic state legiuslator Janet Cruz and Republican state legislator Shawn Harrison behind a SWFBUD initiative -- building the BAM Network.

The BAM stands for "Bicycle Area Mobility" and it centers on SWFBUD's idea to get Tampa and Hillsborough County to partner on building a regional paved trail system that would unite the Tampa Bypass Canal Trail, the South Coast Greenway and the Selmon Greenway into one comprehensive highway system for bicyclists. The tri-trail BAM Network would interface with roads with bike lanes like Fletcher Avenue and also HART bus routes.

Cruz and Harrison both attended the SWFBUD Bicycle Bash festival at beautiful Flatwoods Park on Nov. 6 and support bicycling. Rep. Harrison rode his bicycle with his son during the Bicycle Bash, while Rep. Cruz gave a speech at the Bash supporting bicycling in Tampa,

Bicycling transcends politics. Which is why SWFBUD sat down with Rep. Harrison recently to garner his support for the BAM Network. Rep. Cruz has backed the idea of paving a trail along the Bypass Canal Trail and making it part of the bigger BAM Network.

Rep. Harrison came up with the idea of co-writing a letter with Rep. Cruz supporting thr BAM Network and getting our local state legislators on both sides of the aisle in Tampa Bay to co-sign the letter that SWFBUD plans to share with Tampa Mayor Bob Buckhorn, the Tampa City Council members and the Hillsborough County Commissioners. Commissioner Mark Sharpe is already a big advocate of the BAM Network and wants to see it built.

SWFBUD thanks Reps. Harrison and Cruz for stepping up and agreeing to co-write this BAM Network letter and for getting the local state legislator delegation to support SWFBUD's multi-trail system idea in Hillsborough County.

The BAM consists of three trails that would make up more than 30 miles of paved trails to provide effective transportation and a safe haven for our many local bicyclists. 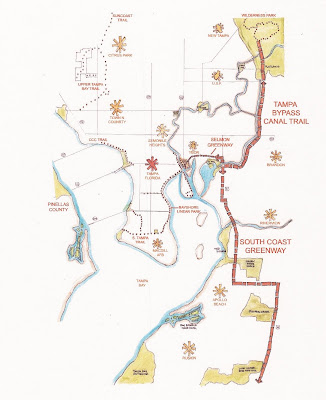 The BAM can't be built fast enough as three more Tampa Bay bicyclists were killed by motorists in three days over the Christmas holiday weekend.

SWFBUD is already making strides with the BAM. SWFBUD has successfully lobbied the local MPO to conduct a feasibility study of the Tampa Bypass Canal Trail crossings, while the South Coast Greenway is in the MPO's 2035 Long Range Plan. The MPO has already had an open house for a consultant to preview the Selmon Greenway, too. 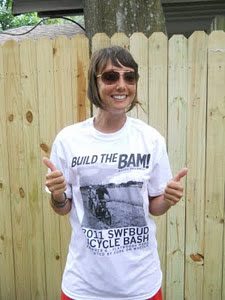 SWFBUD is asking you to also support the construction of all three trails as a cohesive unit and network of paved trails in Hillsborough County and Tampa that would interface with local road bike lanes and HART routes. As you know, the Hillsborough/Tampa area has a high bicyclist fatality rate and bicyclists need safe places to ride their vehicles.

Economic impact: A trio of bicycle paths in Orange County, Fla. pumps $42 million into the local economy annually and supports 516 jobs, according to a study conducted by the East Central Florida Regional Planning Council.
http://www.orlandosentinel.com/news/politics/os-trails-economic-impact-20111017,0,3028584.story

Health benefits: Bicycling is a great exercise that promotes wellness and fitness.
http://www.adultbicycling.com/component/content/article/9-bicycling-basics/37-health-benefits-of-cycling-ii.html

Please write emails to your local elected officials asking them to support the BAM Network and attend public meetings to support the BAM. Let's turn Tampa and Hillsborough County around and go from worst to first in bicycle safety and bicyclist enjoyment.
Posted by Alan at 3:16 PM