Well, it's that special time of the year when the National Bicycle Dealers Association releases its annual "America's Best Bike Shops." 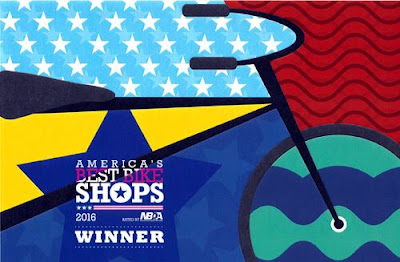 It's an impressive list, with criteria including a store application plus an assessment by a "secret shopper."

-- Chainwheel Drive in Clearwater -- congrats to the Jessups, once again (last three years)

As the former bike advocacy director for a group of Tampa Bay bike shops, I can tell you there are great bicycle stores doing great work and adding to the community that are not on the list.

For example, Randy Myhre of Oliver's Cycle Sports in New Tampa, Rick Fidanzato of ABC Bicycles in St. Petersburg and Adam Beland of Bicycle Outfitters in Seminole are just three bike shop owners deeply committed to furthering bicycling in their communities and who run great bike shops. There are many others too -- like Dave Sanborn who owns a slew of Trek bike shops around central Florida.