Taking The Lane On The Las Vegas Strip

First, the amazing Beth Geohagan pedaled a used, single-speed, foot-brake coaster bike from Summerlin up the sloping hill to the Red Rock Canyon Conservation Area visitor center on Saturday morning. It was a four-mile ride all uphill and an elevation gain of 400 feet or so.

And to top that feat, Beth -- who owns a cruiser bicycle touring business in Lakeland, Fla. called BeFly Bike Tours -- decided to use her vehicular bicycling skills as a CyclingSavvy instructor and bike on Las Vegas Boulevard along the Strip on Sunday. 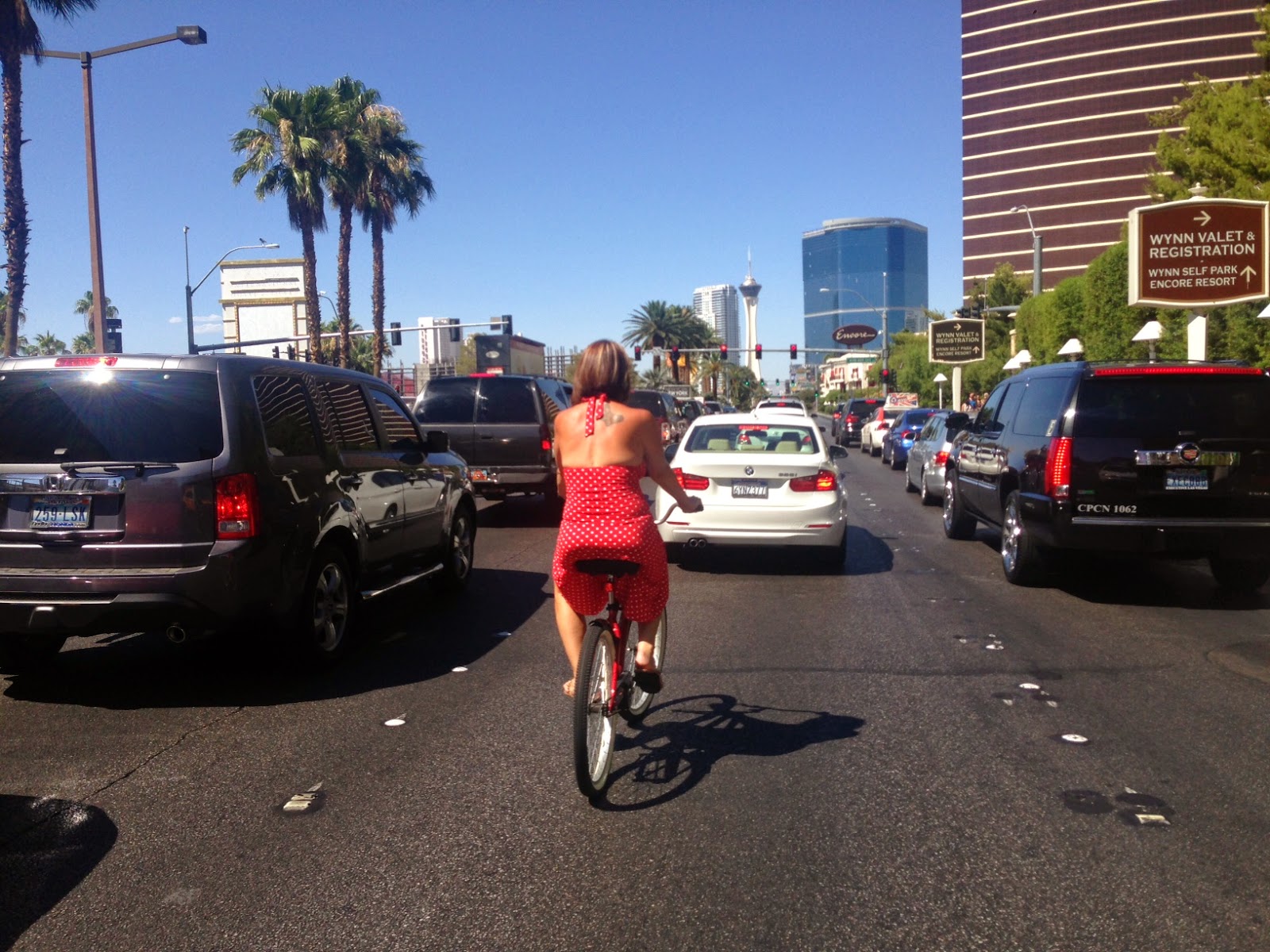 Oh, we drew a few horn honks from nasty motorists who could not believe that people on bikes had the audacity to drive their vehicles in the traffic lane just like any other public right-of-way user.

But it was regrettable that a RTC bus driver chose to buzz Beth by crossing the lane line while passing her by a mere foot, then cutting her off when the driver moved back into our traffic lane, forcing Beth to apply the brakes to avoid being hit by the bus.

Here is the bus driven by the offending driver. It happened at 2 p.m. Sunday while we pedaled south. 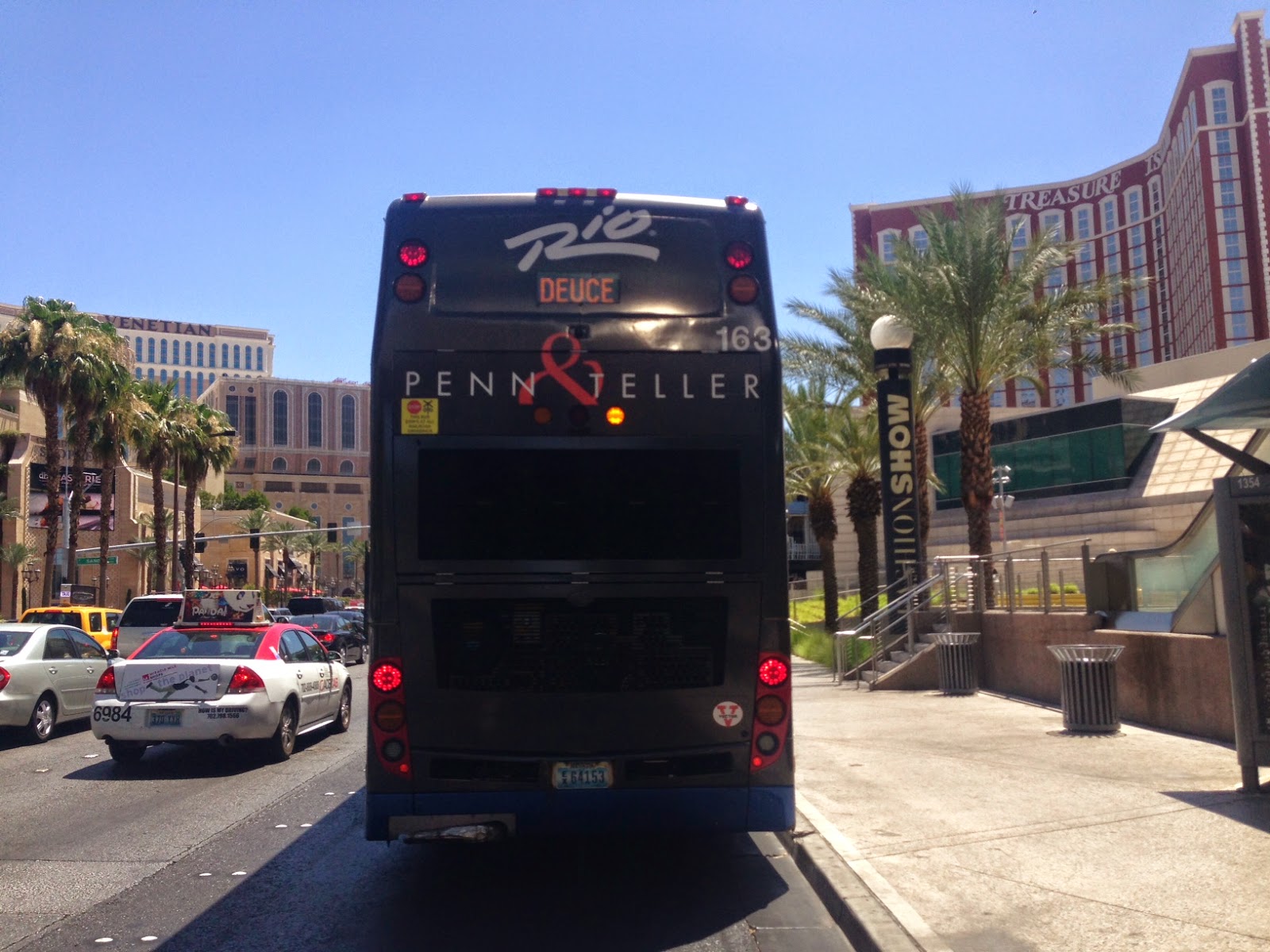 On Tuesday, I contacted RTC General Manager Tina Quigley about this incident. This is the email I sent here:


Dear Tina Quigley,
My name is Alan Snel and I am a bicyclist living in Las Vegas. I am writing to bring to your attention dangerous driving by an RTC bus driver in bus number 163 along Las Vegas Boulevard on Sunday afternoon at about 2 p.m. on June 29.
My friend and I were bicycling in the right lane moving south near Circus Circus when a bus driver passing my friend crossed the lane line and came within a foot of striking her, obviously violating the three-foot buffer rule when passing a bicyclist. The bus driver then cut off my friend as the bus was maneuvered back into our lane, forcing my friend to apply the brakes to avoid being struck by the bus.
My friend is a certified instructor with a nationally-known bicycle safety program called CyclingSavvy. Her position in the lane was consistent with CyclingSavvy standards. It's regrettable that a bus driver employed by an agency charged with promoting alternative bicycle modes appeared to not accept the bicyclist in the road, to nearly hit her while passing her and then cut her off when returning to our lane.
This type of bus driver behavior was recently the subject of a Los Angeles TV news report:
Cyclist Demands Answers From LA Metro After Altercation With Bus Driver Over Lane Share - CBS Los Angeles
I would appreciate it if you can reply with answers in a timely manner:
1. What steps does RTC take to educate its bus drivers about passing bicyclists?
2. What action will the agency take regarding this driver's actions on June 29?
I have attached a picture of the RTC bus that nearly hit the bicyclist Sunday.
Thank you,
Alan Snel
Posted by Alan at 9:30 AM

Great letter. Can't wait to read their response. Thanks for taking action!