The Mighty Bicycle As A Key Part Of Hillsborough's Mass Transit 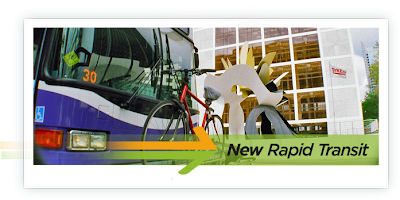 Movinghillsboroughforward.com is a group committed to updating Hillsborough County's transit system, which consists of HART buses.

Modern mass transit consists of light rail, bus, bike and pedestrian modes interlocking in a holistic system to get you efficiently where you need to go.

My mantra for Pam Iorio is that if you want light rail as badly as you say you do, you need to find efficient ways to get people to the light rail stations without cars.

Bicycles do that. They're fun, efficient and amazingly cheap compared to driving a car to a light rail station, paying for parking at a light rail station and then driving your again at the end of the day after you get off light rail. Plus, the local government has to create parking lots -- a very expensive job. Bicycles take up so little space compared to car parking -- and can also be taken on the light rail car.

I commend Movinghillsboroughforward for using a bus with a BICYCLE attached to its front grill. The bicycle use to buses is one of the great success stories in HART, which should do more to promote the bike use.
Posted by Alan at 8:50 AM