Tampa Is 17th Out Of 70 Big U.S. Cities In Bicycle Commuting 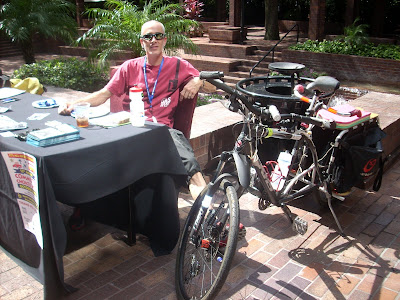 I heard along the grapevine that Tampa Mayor Pam Iorio doesn't think a lot of people bike in Tampa, but maybe that was the Tampa decades ago when she grew up in the city.

Not anymore. Several Tampa bicycle organizations have cropped up in the past few years and here's the most compelling data of all -- Tampa was 17th out of 70 big cities in the U.S. when it comes to bike commuting in 2008.

Check out this chart; American Bicyclist is the source. 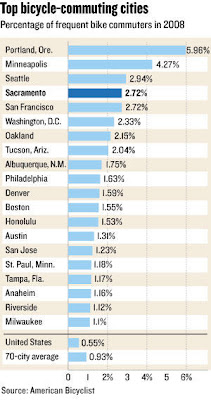 People DO ride bicycles in Tampa -- and many more would if Tampa improved bicycle infrastructure.
Posted by Alan at 9:06 AM

It's funny...I know fellow commuters are out there, but I rarely see anyone else but my wife and my neighbor from down the street -- both are dedicated commuters like myself. I even commute during the so-called "rush hours" now that my work schedule got realigned.

So, where are those commuters?

i think that municpal officials should be made to cycle to work and to meetings, then they would see for themselves and would improve the conditions. It would solve many of their problems with traffic, pollution, obesity etc.