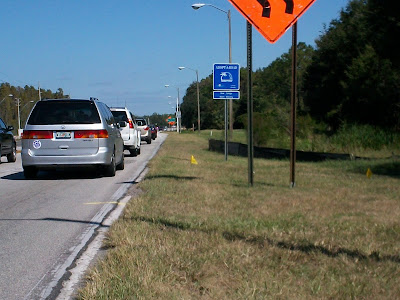 So, you want to be a bicycle commuter? Local government in Hillsborough County can help us out by offering better roads than this to bike on while the Bruce B. Downs Blvd. project is under re-construction.

You're looking at the road that Scott Mears has to bike on from his new Tampa hiome to Moffitt Cancer Center every day because Hillsborough County failed to make accommodations for bicyclists on sections of Bruce B. Downs during its road-widening reconstruction.

Scott sought help from the county's Bicycle-Ped Advisory Committee on Wednesday night. As a BPAC member, I saw Scott's photos and I was ticked off that the county did not offer a wider road for cars and bicycles. 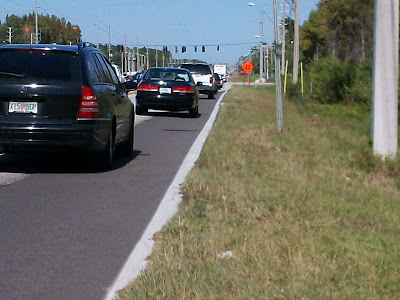 Instead, the county told Scott to take two sideroads in new Tampa to circumvent the lack of a bike lane or bike trail along the Bruce B. Downs construction zone. Here is Scott's response, in part, in an email:

"I have to say I’m profoundly disappointed that the attempts to temporarily improve the situation, as suggested by Tom Mueller in his Oct. 26 email will not be carried out. I believe the photos I showed the committee last night unequivocally illustrates how dangerous these areas are, and they also show where additional pavement had been added to accommodate vehicle lane diversions, but not the additional space needed for pedestrians and cyclists.

"As Mr. Mueller had indicated in his email, he, Scott Passmore, and Tom Capell visited the areas of concern and “concluded that it appears feasible to create 18 inches of paved shoulder in both the north and southbound directions….”). Reading that gave me hope that once the contractor provided the cost estimate, we were good to go.

"However, Mr. Williams has subsequently determined the additional pavement would be a “substandard” width of shoulder to safely accommodate cyclists. I’m not certain what that means, but at face value I’d have to say that to us cyclists “substandard” is far better than nothing at all. His recommendation that cyclists use the detour leading from New Tampa Blvd. to Highwoods Preserve is in theory very possible, but it is far from practical. Many drivers, frustrated with the back-ups on BBD, shortcut down through that route, and because everyone is in a hurry, the speed limit is disregarded and drivers are frequently reckless."
Posted by Alan at 10:05 AM