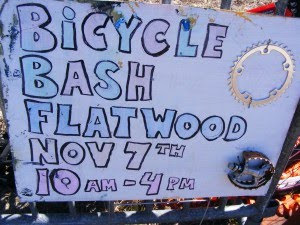 Tragically, it took bicyclists losing their lives on the roads of Tampa Bay for the media to start covering bicycle conditions in Tampa Bay.

Now, the stories on TV, in the newspaper and on radio come nearly on a daily basis.

SWFBUD's Bicycle Bash 2010 Sunday drew extensive coverage. The St. Pete Times published a story on the front of its Sunday metro section about the Bash and bicycle safety.

TBO's Ken Knight also wrote an item about the Bash on Saturday.

Sunday, Channel 28 ABC Action News, Channel 8 and Channel 13 all sent reporters to talk with bicyclists at the Bicycle Bash.

Channel 13 came out with this story Sunday.

Josh Green of WFLA-TV did a nice report that I saw last night and I'm still trying to find a Web link for that one.

Creative Loafing also did a report on the Bash.

And WUSF radio offered a report by a young radio reporter who went out biking with her tape recorder on roads around the USF campus.
Posted by Alan at 1:29 PM