Nice to see the bicycle messages returned recently to the Hillsborough County Sheriff's Office portable signs in Fletcher Avenue near I-75. SWFBUD suggested the HCSO start the sign messages on its portable sign boards last year. 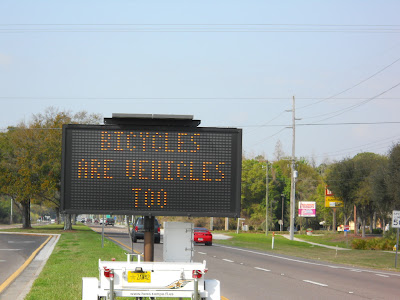 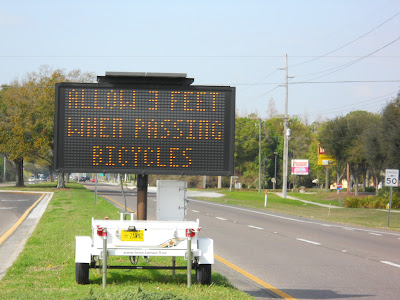 The sign is situated about a mile west of where bicyclist Robert Niedbalec, 52, of Temple Terrace, was killed by a speeding motorist on Fletcher Avenue on Feb. 13.

There will be a bike ride in memory of Robert Niedbalec, the bicyclist killed by the motorist on Fletcher Avenue, at Lettuce Lake Park on Sunday at 2 PM.
Posted by Alan at 11:01 AM

I noticed these too, and it was very good to see. They've been ongoing for the last week and a half.

Too Right ! I couldn't agree more, we all need safer roads and anyway they can think of to get that sorted is ok by me. keep posting Dude. x