Tomorrow, early voting begins to elect a new Tampa mayor. In addition, all seven Tampa city council seats are up for grabs. The election is March 1.

Bicycling as a public policy issue is never as important as it is now given the high death rate of bicyclists in the Tampa area; the lack of a comprehensive and coordinated bicycle route network; the dangerous and reckless motorists who imperil the lives of local bicyclists; the many bicyclists who ride at darkness without lights and reflective vests and who ride against traffic; and the lack of appropriate criminal punishments for motorists who kill and injure bicyclists.

Here are the Snel endorsements based on the candidates support and commitments to bicycling.

No surprise here. Ed is more savvy about bicycling than any other mayoral candidate. He used to bike-commute to his county commissioner job in the 1990s and likes to show an amusing photo that shows him holding his bicycle in front of his county commissioner car parking space. Ed is a big rails and trails guy and also identified specific corridors in Tampa that he believes can be used for bicycle infrastructure improvements. 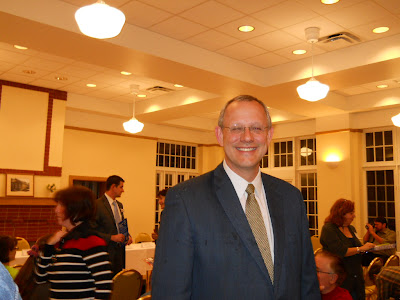 Rose Ferlita, Dick Greco and Tom Scott know little about bicycling as effective transportation and offered no ideas about how bicycling can enhance Tampa.

District ONE: No candidate has emerged as someone who has supported bicycling. No endorsement.

District TWO: Incumbent Mary Mulhern in October prompted the city council to join Hillsborough County in launching a bicycle safety action plan. Mulhern also had a city council bicycle workshop in January. Mulhern has spoken out publicly in favor of bicycling at a time when other city council members rarely mention bicycling. 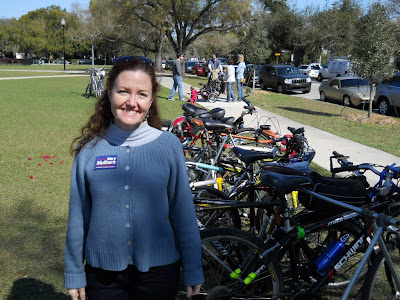 Ditrict THREE: Jason Wilson came to me with a list of proposed bicycle imrpovements from bolstering eduction and awareness about bicycling and adding sharrows to city streets. No other council candidate sought me out to offer bicycle improvement ideas. Jason, an ER doctor at Tampa General, also bike-commutes to his emergency room job. 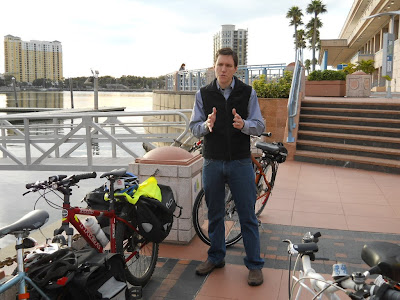 District FOUR: Julie Jenkins has expressed to me her support for bicycling as a viable transportation mode and talked about her past experiences of bicyclingin Washington, D.C. She promised to suppert bicycle measures if elected.

District FIVE: No candidate has articulated thoughts about improving bicycling.

District SIX: Kelly Benjamin is a clear choice over incumbent Charlie Miranda. Kelly dropped off his campaign lawn signs by bicycle and identified bicycling as a crucial issue when talking with newspaper editorial boards. Kelly helped with the memorial bicycle ride on Oct. 1 when I led the ride to memorialize the lives of bicyclists killed by motorists in the Tampa area. Charlie Miranda has never mentioned bicycling as a safety issue.

District SEVEN: I have not heard any public comments from the candidates in this district.
Posted by Alan at 3:19 AM