Before The Rains Came -- And Afterwards, Too 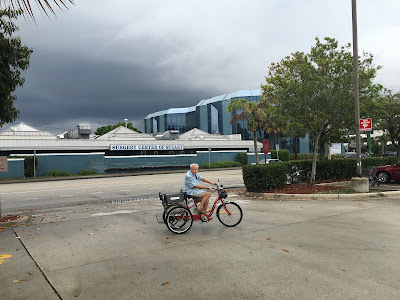 This is Stuart, about 45 miles north of West Palm Beach.

Before the rains struck Florida around mid-day I was pedaling north on A1A just north of Vero Beach heading for Wabasso and Sebastian.

It's a beeline of a road, with a capable bike lane and large green hedges, bushes, trees and plants creating walls of green on both sides. The Atlantic Ocean is hidden behind the wall of greenery on my right.

A road cyclist on a Pinarello Dogma catches up and passes me as we head for Wabasso.

I caught up with the roadie and told him I liked his lime green handlebar tape and that was all it took to trigger two hours of chatting and cycling on A1A from Vero Beach to Sebastian and back.

Turned out Robert was a lawyer from Orlando who grew up in Vero Beach and went to Vero Beach High School. He was in town with his son who was playing a tennis tournament and they were visiting Robert's parents who still live in the same home that he grew up in.

We reached the A1A bridge spanning Sebastian Inlet and stopped for photos. 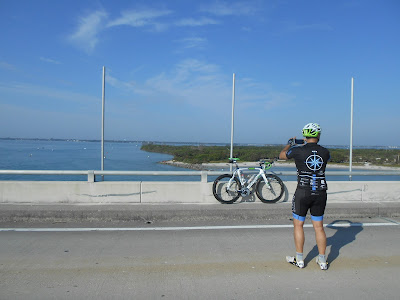 Robert knew where the best surfing was in this inlet and scanned the oceanside of the A1A bridge, then walked to the Indian River intracoastal side and snapped a photo of his bike there, too.

We turned around and headed south, with a slight detour to hammer up the Wabasso bridge and back over that bridge to A1A for a southern excurision to his son's tennos action.

We promised to stay in touch -- another bicycle friend made on the road of life.