HART Will Post Bicycle Safety Signs After A Bus Nearly Hit Me On Dec. 23

On Dec. 23, a HART bus nearly hit me while passing me on Rowlett Park Drive. It was the third time a HART driver nearly bashed me while passing and each of the three drivers -- when confronted -- told ne they did not know that drivers had to pass bicyclists on the road with a space of at least three feet.

Today, I spoke on behalf of SWFBUD before the HART board and retold the story and told them the agency needed to do a bicycle awareness campaign. That is, post signs about passing bicyclists with at least three feet and without honking and slowing down.

The signs will go on the buses and deliver messages such as this on outside Clermont. 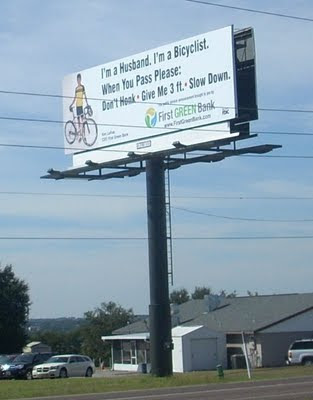 Katharine Eagen, HART's chief of service development, will be in charge of this bicycle safety awareness campaign.
Posted by Alan at 8:41 AM

This is one of the most beautiful things I have ever read. I actually had a bus not quite right hook me, but honk at me multiple times and then unnecessarily pass me (with plenty of clearance and in the other lane) at sligh/rowlett only to turn right at the stop sign at 30th st maybe 100 feet later. Knowing that bus drivers will be more courteous AND be spreading the word to regular motorists is a great thing. You are the man, Alan.

I'm curious... did this ever happen? I never saw any.

Also, how does one go about making a formal complaint? I just got buzzed this morning on my way to school. >_<