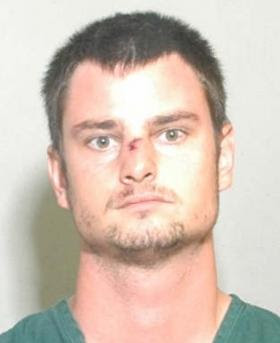 Matt Roger Salmons is the 25-year-old pickup truck driver who -- according to the police report -- "went to town" with his pocketknife when stabbing two Jacksonville cyclists who were part of a Memorial Day bike ride put on by the North Florida Bicycle Club Monday.

Salmons the bicyclist stabber has quite the police traffic record -- 14 priors for various driving infractions going back to 2002, the local Jacksonville paper reports.

The most seriously injured cyclist -- John Wesley Faulk, 51, of Jacksonville -- was in fair condition after he was stabbed by Salmons. Faul was stabbed once in his stomach and five times in his back. He's at Shands Jacksonville.

The second bicyclist who was injured was David C. Elcess, 48, of Jacksonville. He was cut once on each arm by Salmons.

Salmons was charged with two counts of aggravated battery and one count of simple battery.

For the entire Jacksonville News story, check this out.
Posted by Alan at 7:24 AM

What!! How about charging him with attempted Murder????!!!! or even a HATE Crime!

The ultimate irony will if he loses his license and has to-gasp!-ride a bike. (why does he still have a license after all those offenses and how can he afford insurance, which must be out of sight?)

@darrinw:
Attempted murder could make sense but might be hard to prove... how would it be a hate crime though?

@peep:
That would be quite ironic... (and he might not afford it -- perhaps he doesn't have any).

I hope they throw the book at him. And then drop the bookcase on him.