Best movie ever made.

In June, I was cycling on a road outside Baltimore and saw a garage sale. Stopped by and, lo and behold, there it was -- a video of Breaking Away.

Fifty cents later, I had a video of Breaking Away tucked in a jersey pocket in the small of my back.

Bridget played the video tonight and we saw it. Still loved the writing of the movie's screenplay. In fact, the movie's writer, Steve Tesich, won an Academy Award for Best Original Screenplay. 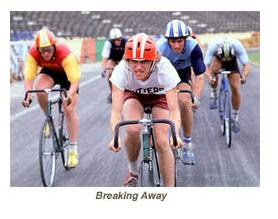