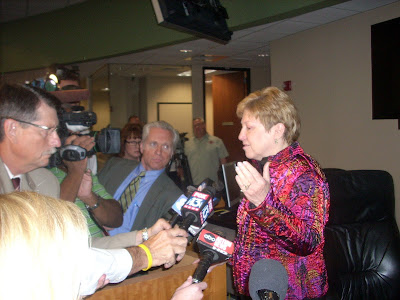 Well, Hillsborough County still has a county administrator -- Pat Bean, the quiet, good ol' lady who has been around county government for more than three decades stayed alive on the job even though Commissioner Mark Sharpe wanted to give her the axe.

Pat Bean is perceived to be in Commissioner Jim Norman's back pocket and screwed up affordable housing money by letting $2 million go unspent. Neither Pat Bean nor Jim Norman are fans of bicycling, as far as I can see.

But despite a rough year for Bean, five of Sharpe's commissioner colleagues on the seven-member board of county commissioners voted to keep Bean on the job, mostly because the county would have owed her $482,000 for two more years on her contract that expires in 2011.

So, Bean did get a slap on the wrist, instructed by her bosses -- the county commissioners -- to return in January with a vision for Hillsborough County.

Here's Pat after the meeting.