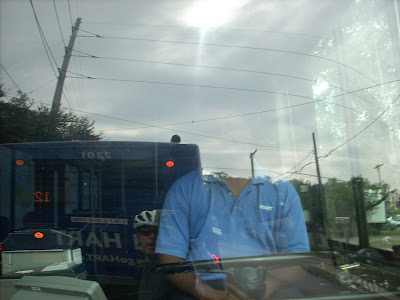 When a HART bus driver (pictured above) nearly hit me on Rowlett Park Drive last week and then told me to bike on the sidewalk when I confronted him about the incident, let's just say he picked the wrong bicyclist to try and blow off.

I filed a complaint with HART as soon as I got home. The incident is in HART's files as "Transaction 23317."

Yes, my putting on the record of nearly being struck by a HART bus is described as a "Transaction."

Bureaucratic euphemisms aside, I spoke today with HART's customer service director, Sylvie Castillo, who advised me that the agency looked into the matter and confirmed my report -- that the bus driver did indeed violate the 3-foot minimum buffer law and was counseled about the matter.

I was told HART drivers will be instructed to give bicyclists the required three feet of buffer space when passing a bicyclist.

But I still plan to speak at HART's Board meeting on Monday at 8:30 AM about the incident and advise the agency that as a response HART wiould be required to post signs on its bus exteriors to tell motorists to give bicyclists the requited three feet when passing and to share the road.

The bus driver's response of telling me to bike on the sidewalk is part of a bicycle culture in Tampa, where bicyclists are marginalized and intimidated by car drivers who don't understand that they are required under law to share the road, meaning passing a bicyclist by a margin of space of at least three feet.

I plan on enlisting HART Monday to help spread the word to the local Tampa-area citizenry.
Posted by Alan at 9:56 AM

Alan, what do we need to do to put stickers on the buses? $ or are there stickers available from other resources?