The Bicycle Family in Seminole Heights

Here's a fun feature story for either one of the two daily newspapers in town, but I doubt they'd write about it -- Seminole Heights is Ground Zero for ALL types of bicyclists in Tampa. Seminole Heights is home to one of the fastest cyclists in the region -- Alan Badia. Then, there's the famed Ghost Rider -- Jack Sweeney, a bike-commuting maven. How about bicycle-builder Steve Swiger, who helped me bike 170 miles across Florida in one day.

Living near me is bicycle advocate Chip Thomas and even Gena Torres, the former MPO staffer who used to oversee the Tampa/Hillsborough Bicycle-Pedestrian Advisory Committee, counts Seminole Heights as her home. Gena has been known to ride her bike now and then. And road and bicycle planners Angelo Rao and Beth Alden are in the 'hood, too.

Lots of people bike-commute from Seminole Heights, like speedy bicyclist Lisa who works at the local Starbucks. And my pal Picot Floyd, who loves bicycles, used to bike 10 miles to the Telecom corporate area off Fletcher Avenue.

And how about Chris the firefighter who has a bike shop at his SH home? And let's not forget the hometown Seminole Heights Bicycle Club, which was featured in the November edition of Bicycling Magazine. Even St. Pete Times writers Ben Montgomery and Bill Varrian live in SH and ride bikes.

My point is that Seminole Heights is fertile ground -- and pavement -- for an amazingly diverse group of folks who love to ride all types of bicycles.

Which brings me to this fella this morning who I saw on a Hillsborough Avenue sidewalk crossing Florida Avenue.

Like I said, it takes all types to ride in Seminole Heights. 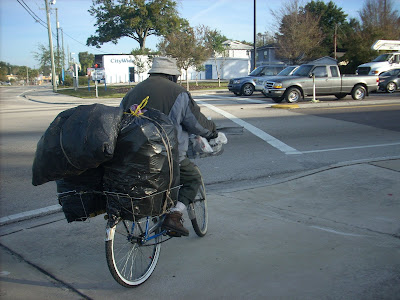 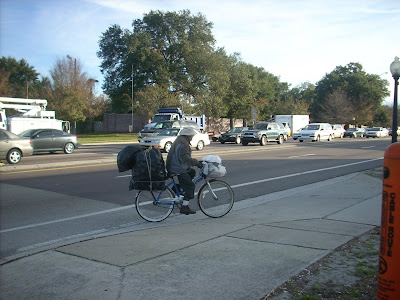 Ha...I'm not sure I've ever been described as a "maven", but I can live with it!

Weird how SH is such a hotbed of bikey fiends -- glad I live here and can count most of those wonderful people as my friends.