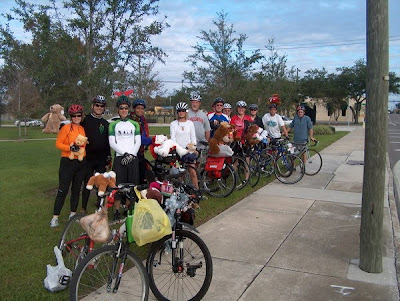 Kudos to green vest-clad bicyclist Jose and the other 13 cyclists or so who delivered teddy bears via bicycle during an Seminole Heights Bicycle Club Urban Ride to Channel 8. The delivery of the teddy bears for sick kids in Tampa made the news. The Holiday Teddy Bear Urban Ride will probably be an annual ride every December.

Channel 8 took some footage of the teddy bear delivery for a newscast Saturday and check out some more photos here. Nice to combine bicycling with giving this holiday season and it was cool that members of other clubs joined in the ride.
Posted by Alan at 1:04 PM